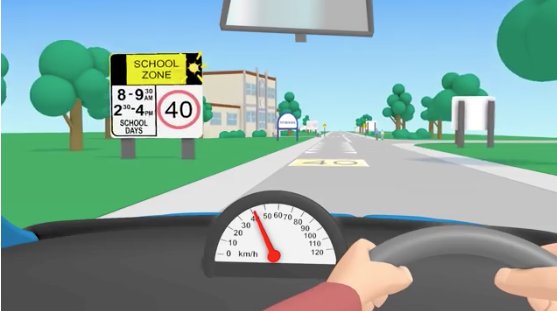 The Canberra Liberals will spend $7.5 million to install flashing signs in ACT school zones if elected to government in October, reviving a policy they took to the last ACT election.

In 2012, Shadow Minister for Transport Alistair Coe told the ACT Legislative Assembly in August, 2012, that the Australian Road Research Board had found that flashing lights in school zones were effective in reducing vehicle speed outside schools during the operation of the 40 km/h school speed zone and that the NRMA had stated that a motorist’s awareness of school zones and ability to comply with the speed limit had been significantly improved where flashing lights have been installed.

He also quoted a US study that found:

Mr Coe and Leader of the Opposition Jeremy Hanson said today that the signs would be similar to those installed around NSW schools, and that they plan to operate them them in all ACT schools to remind drivers to slow down.

There is at least one set of flashing lights at every NSW school, though these are only in operation during school drop-off and pick-up peak periods.

Mr Coe said today that the signs had been demonstrated to be effective in reminding drivers and enhancing safety for children.

“Whilst some motorists consciously speed, many only do so because of a momentary lack of concentration and these signs will prompt motorists to slow down on the most critical stretches of our roads,” he said.

The ACT Government is in the process of rolling out mobile speed van sites in all Canberra schools, with more than 40 schools already up and running and another 50 at the testing stage.

The Minister said the Government would not be implementing flashing lights at this time.

They had recently made a number of changes to improve safety around schools, including the establishment of a dedicated Schools Transport Coordinator responsible for liaising with schools on transport issues, dragon’s teeth road markings to increase driver awareness, a trial of 30km/h zones around schools, allowing mobile speed cameras into more school zones, conducting road safety blitzes on speeding around schools, and investing $2 million in the Active Streets for Schools program to make it easier and safer for kids to ride or walk to school, helping to ease congestion at pick up and drop off times.

“While a recent review of school zone signage practises in the ACT and around Australia found a territory-wide application of this type of flashing light signage was found not to be justified – largely because road conditions are very different in the ACT than in other jurisdictions – we will of course continue to work with schools and P & Cs to find the best ways to improve road safety,” Ms Fitzharris said.

A 13-year-old boy was rushed to hospital after being hit by a truck outside Kingsford Smith School in Holt earlier this week.

Pictured is a still from a video on the NSW Centre for Road Safety website.

The implementation of this should be a no-brainer. I agree with wildturkeycanoe that this may not suit all schools, however for the chance that it makes a difference and saves a child’s life let’s do this.

I couldn’t persuade the government to put in a pedestrian or school crossing over a busy road that divides our suburb and half the students have to cross to get to school. Apparently the traffic and pedestrian movements aren’t enough to warrant such a crossing and the traffic island on the roundabout is sufficient. I wonder if the recent spate of wet weather negatively skewed the figures of their investigation.
Putting lights down at the school on a street that is already so narrow that cars can barely do 50km/h seems redundant when there is more danger 400m up the road, where kids have to make a decision to cross the road based on traffic coming from three different directions, one of which has line of sight of traffic often blocked by a bus at the stop. They still haven’t responded to my concerns about the crowded illegal parking on the street every morning and afternoon, blocking the roadway with cars parked at every angle imaginable.

I recall that, when the Liberals proposed this at the last election, Labor countered with the argument that it had been estimated that the benefits did not justify the cost.

$7.5 million could provide a lot of useful infrastructure that would help kids to walk or cycle safely between home and their school zone – unless it is spent on vanity projects like Simon Corbell’s $6m City Cycle Loop and Katy Gallagher’s $10m Majura Parkway.mostly-off-road cycle path.

I support this, I agree that they do make it lot more noticeable, and new drivers especially, can sometimes miss the school zone sign without meaning to, this would make that a lot less likely.

Kari James - 25 minutes ago
I would find this job incredibly difficult and stressful - great work to the team! View
Natalie Griffiths - 40 minutes ago
I spoke to them yesterday and they lady I spoke to was amazing and had a laugh with me. Well done to them all View
Suzanne Tunks - 51 minutes ago
Mark Scarborough well that should be fine but always wise to read up on it first or give the hotline a call 😊 View
Business 2

Penelope Rose - 28 minutes ago
No money means can't pay rent, mortgage, electricity, etc, no food. Homelessness isn't something anyone wants. Business peopl... View
Sher Bee - 4 hours ago
Temporary benefits for the fully vaccinated would be a nice step. As key percentages are reached the benefits can be expanded... View
Business 107

Joanne Foster - 2 hours ago
Lach Trev they sure would 😉 View
Lach Trev - 3 hours ago
Erin Louise Joanne Foster Jeremy Foster the kids would love this. View
Callam Sansom - 4 hours ago
No way will there be a expert line out there 😂 View
Opinion 25

@The_RiotACT @The_RiotACT
Dobinsons is on a roll and bringing their baked goodies to a street near you. Find you how you can get your fix to make lockdown a little sweeter https://t.co/z8IGWiEGyy (11 minutes ago)