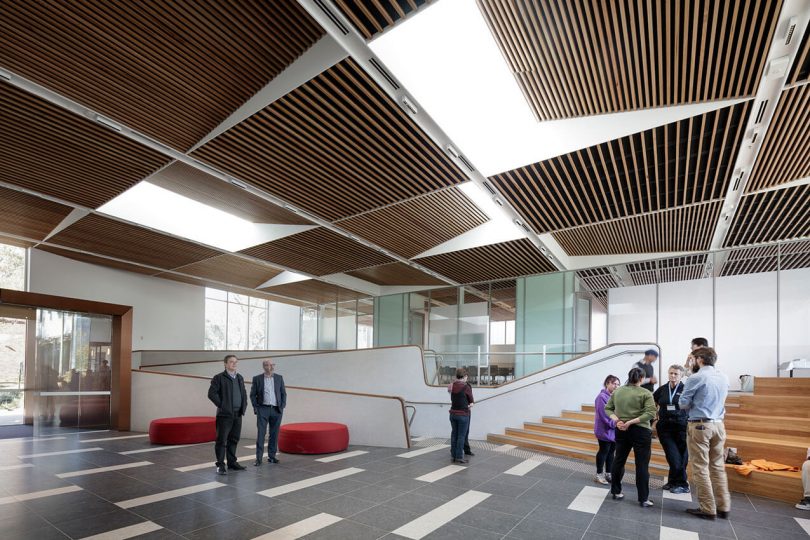 GMB’s design for ANU College of Law has been submitted in the Interiors category. Photo: John Gollings.

Canberra’s architects are coming into their own to producing work that celebrates the national capital and its unique environment, local architects chief Shannon Battison says.

That growing sense of identity and confidence is reflected in this year’s ACT Architecture Awards, which will be presented online for the first time due to COVID-19 restrictions, with the Territory’s best architectural projects to be announced through a YouTube event live streamed on Friday, 5 June.

Part of a national program run by the Australian Institute of Architects, the ACT awards lead off a month-long series of state and territory events which recognise architectural excellence in categories such as public architecture, residential, commercial, education and sustainability.

There are 43 ACT entries this year vying for awards across nine categories with individual awards such as the ACT Emerging Architect of the Year being presented.

Minister for Building Quality Improvement Gordon Ramsay will present the Canberra Medallion – the highest accolade for architecture in the ACT – for the most outstanding project.

Ms Battison says that despite a year marked by disaster and now the threat of disease, local architects have rallied to submit more entries than ever, and the calibre of work is outstanding

”I’ve noticed a real shift towards architecture that speaks a bit more to Canberra’s story,” she says. ”There’s a real push to celebrate Canberra. That’s been a really strong trend in this year’s submissions.” 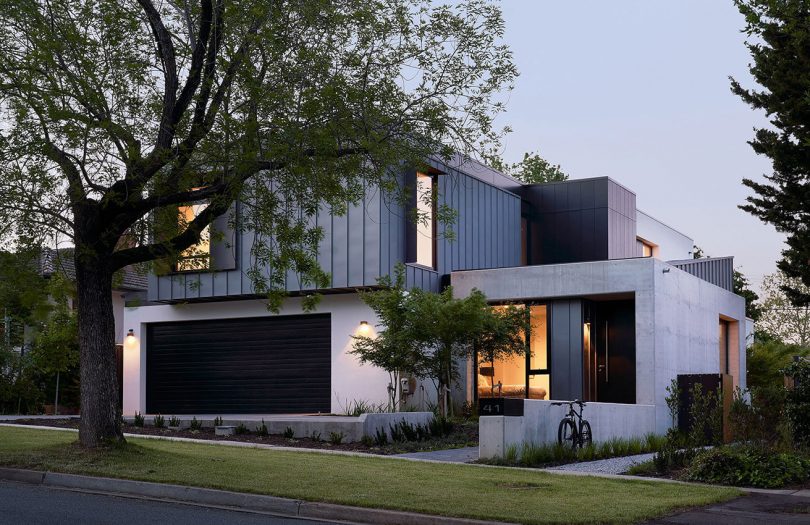 She says local architects are proud of what they’ve put into the city.

”We have this real opportunity because we’ve recently stopped trying to compete with, say, Sydney or Melbourne, and we’ve found our footing, our own identity.”

Ms Battison says Canberra firms are doing incredible things, and local firms are starting to hold their own in the market.

”One of the great joys of the awards is that we get to see that we punch far above our weight as a small city,” she says.

Ms Battison also highlighted that 14 entries had been received for the sustainability award.

She says all good architecture should incorporate an element of sustainability, and this year after the summer from hell, more architects are proud to show what they are doing in this space. 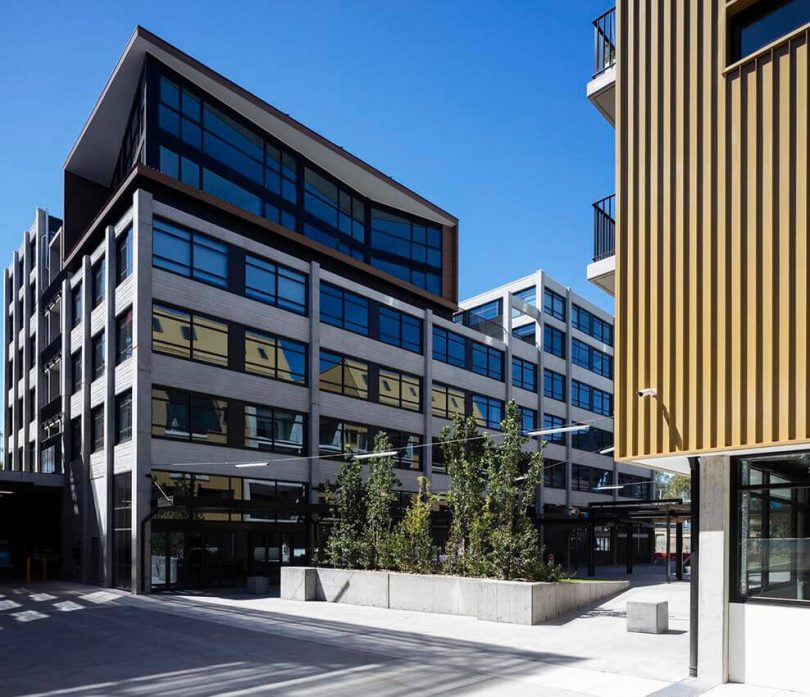 ”It’s people doing the basics really well – getting orientation right, designing to the site, and to the clients and how they live their life, and they can do that in a really efficient and climate-responsive way,” Ms Battison says.

She is excited that producing a virtual awards event will expose their work to people outside the profession.

”The awards program doesn’t go out much to the public, but the online format means anyone who has an interest has a chance to participate,” she says.

It also shows how the architecture profession can adapt quickly to change.

“We know it’s a tough time for Canberrans and for many of our members,” she says. ”Producing a professional and engaging awards program that celebrates and promotes quality architecture in the ACT is one of the positive ways we’re supporting our members and reaching out to the community during this uncertain time.” 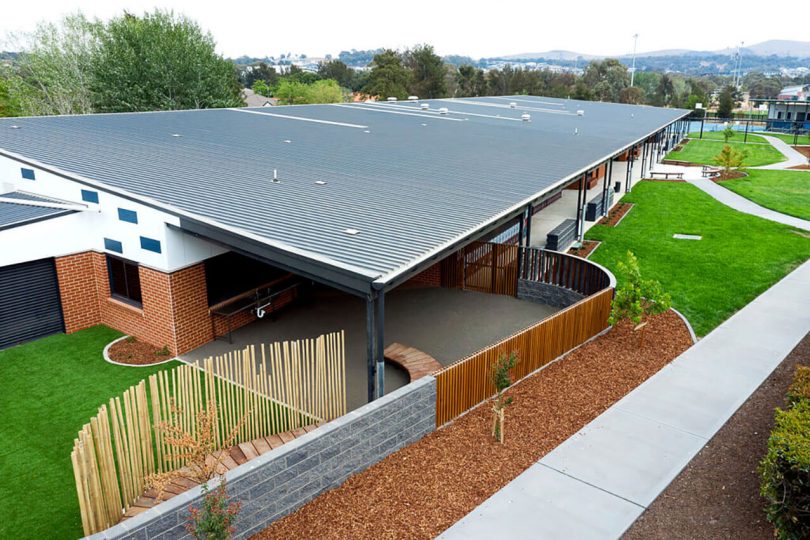 Live streams for all the Institute’s Chapter Awards will, for the first time, be open to members and the public free of charge. The digital presentations will cross live to the winners and architects, sponsors and jury members. The wider building and planning community across the country is invited to tune in and enjoy the live events.

To view more of the entries go to the Entrant Gallery on the Institute’s website.

The awards ceremony can be viewed at https://www.youtube.com/user/AusArchitects.

Sue McColl - 7 minutes ago
He “locals” are a small ,loud,opinionated group; there is no “prime agricultural land” anywhere in sight but an old s... View
News 13

Sandra Bowe - 26 minutes ago
Karin Hill thanks for the link Karen, just called the hotline as buzzing still evident in ceiling, good to get advice .. View
News 14

Nell Feneck - 35 minutes ago
Another well done project by ACT Labor 🤦🏽‍♀️🤦🏽‍♀️🤦🏽‍♀️ View
nobody - 7 hours ago
So the pool has been out of action for a year, and they are just concluding the tender process for repairs now, then the repa... View
Kim KD Winks - 8 hours ago
Seems legit. Why not stuff something up and then walk away with your hands in the air, shouting I don’t care!!! Happens so... View
Community 19

Bec Swift - 1 hour ago
RIP Mr Frugii View
Chelsea Adhami - 6 hours ago
Any word on when the funeral will be? View
Sport 5

Lyn Christie - 3 hours ago
Ian E Wheeler maybe somewhere you can register if you don't see community nurse and are unable to get out to receive the shot... View
Tom Porter - 5 hours ago
Maybe the carer can arrange for the community nurse. It is not prohibitive. Then again the government could contract Aspen to... View
Ian E Wheeler - 6 hours ago
Needs to be a bit more organised than 'we might use community nurse.' Not everyone stuck at home sees a nurse. View
News 3

The buildings that moved the judges at the ACT Architecture Awards