Last night at Belconnen Mall several Canberra celebrities plus Gold Logie nominee Simon “Hotdogs” Deering lined up for hair colouring, head shaving and leg waxing to raise money for cancer research as part of Shave for a Cure (which may possibly now be called Me No Hair).

I recognised MLA Bill Stefaniak and 104.7FM host Mark Parton among the group. 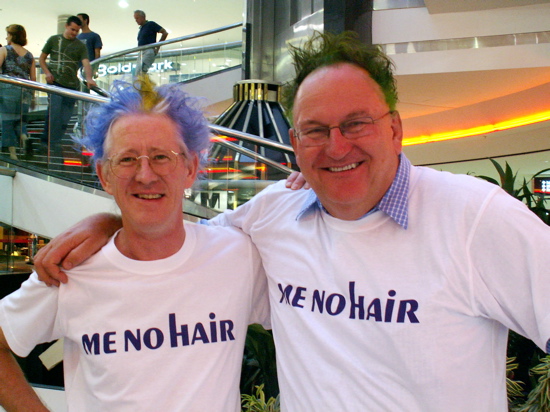 Bill was getting his hair colour green, but said to raise twice as much money he would be getting it all shaved off in about a week’s time.

Mark went blue and wild and wasn’t too worried about how long it would stay that way since he is in radio (unlike the news reader from one of the commercial stations — possibly channel 10 — who thought she might have a strenuous bout of hair washing to do before work on Monday). 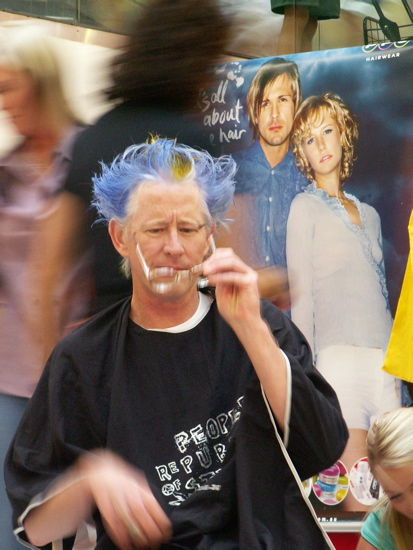 Hotdogs seemed to be the main drawcard. I had heard nothing about his coming to town, but I imagine if you watched channel 10 or listened to 104.7 you would have. They certainly had a decent crowd wanting to know what was going on and there were girls with buckets collecting money all through the Mall. 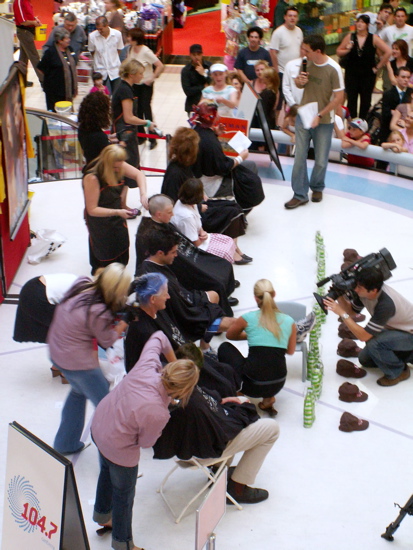 Apologies, Mark Parton is from 106.3 but you will note the 104.7 sponsorship signs around the place which confused me.

me no hair – but me look ghey

Carol Aspley Davis - 2 hours ago
We came to a BUSH CAPITAL. Canberra is a beautiful city of a blend of city and country - well it was! It seems greed to pay f... View
Julia Ross - 6 hours ago
Chele Forest What Canberra needs is some medium density stand alone townhouses where you own the land and there is no body co... View
Chele Forest - 7 hours ago
I'm looking forward to the day that I can leave this monstrosity that is this new Canberra and get back to a real bush capita... View
News 64

Janine Gilchrist - 7 hours ago
Definitely View
Yuri Shukost - 10 hours ago
Ankle monitors and home detention is the only way I’d support this. View
Isabella Goyne - 22 hours ago
If they’re in for non-violent offences, it should be at least considered. View
News 62

Emma A Holliday - 8 hours ago
Michelle Guerrero while it seems to make sense this isn’t about risk it’s about infrastructure. The coastal areas simply... View
News 2

Vindalu - 8 hours ago
Love the rain, shoulda been a frog! View
Deref - 24 hours ago
Nice to get some more rain. We need a LOT more, though, to get the dams up. View
News 26

Susie Deards - 16 hours ago
Elroy it is unusual - unless your stirring, that you feel we don’t already have a lot of development going on in Canberra -... View
David Brown - 20 hours ago
The only Canberrans who want this development are Barr and his cronies and developers. 😡 View
Mirjam Herzog - 1 day ago
Chris Cross' pro argument citing the rates income from diplomatic missions is a highly contentious issue as the concept seems... View
Lifestyle 12

MERC600 - 24 hours ago
Anna thank you for your concern re my car and a tree. But after I got a coffee and wandered back to the car the 15 minutes wa... View
Anna Bruce - 1 day ago
If you choose to disregard the medical directions given to you (a lot of that going around lately) and crash your car into a... View
News 6

Chris Allen - 1 day ago
The one thing that does worry me. When all this has settled down and we are allowed to behave and live our lives as usual, wh... View
News 2

Acton - 1 day ago
April Fools Day prank. Right? If not, share the pain Andrew Barr, instead of spreading it Cancel the next rates notice for al... View
News 4

Police have released two face-fit images of a man they believe is responsible for approaching two boys in Giralang earlier...
News 2

Canberrans will soon see perspex barriers at the checkouts of Woolworths supermarkets as the chain moves to decrease the risk...
Opinion 22

@The_RiotACT @The_RiotACT
Could the huge numbers of unemployed Australians be deployed into public works projects that benefit us all? Economist Richard Denniss is asking what we'd build here in Canberra with a Depression style works program https://t.co/t5egvGtLkL (1 hour ago)

@The_RiotACT @The_RiotACT
Temporary powers to prevent tenants being evicted from their homes, ensure support for community clubs and restrict firearms are part of a wide-ranging Bill to go before the Legislative Assembly today. Find out how the Bill will affect you https://t.co/gnwjSMQFNi (2 hours ago)

@The_RiotACT @The_RiotACT
More help for ACT households and businesses is on its way after Chief Minister Andrew Barr flagged another economic stimulus announcement by the end of the week https://t.co/QhqmJLBiBe (3 hours ago)