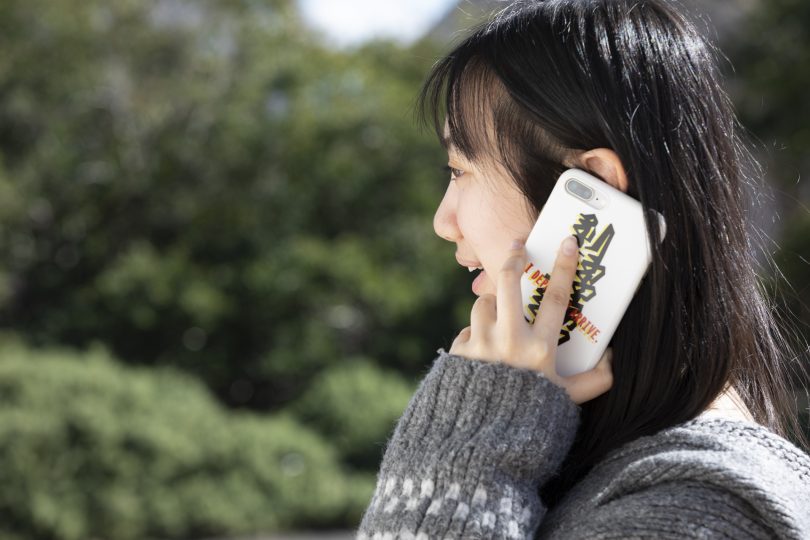 Chinese students and residents have been subjected to attempted scams. Photo: Michelle Kroll.

Laura Liu is the RiotACT China’s translator. She’s lived in Canberra for several years and has a degree in accounting. She was visiting her family in Hubei Province when the COVID-19 pandemic began and endured a long lockdown there before returning to Australia. On her return, she was the victim of an attempted scam, among a number of other Chinese students. This is her story.

“I was back in Canberra from Hubei and had complied with ACT Health’s direction of 14 days self-isolation during March .

“During my quarantine, I received a call from someone who claimed to be from the ‘Chinese Embassy’. The man spoke Mandarin, confirmed my name and knew I’d just arrived in Australia.

“He said: ‘The authority found that you have been to Beijing’s hospital and have been recognised as a COVID-19 close contact’. He said I was suspected of breaching quarantine due to leaving China.

“Then he ordered me to provide my Chinese ID.

“But the fact is that I had not been to Beijing in 2020. I had done health checks and was granted permission to leave Hubei in accordance with all the legal requirements before returning to Canberra. I told him that.

“He said: ‘The system shows that you are a COVID-19 close contract but you have breached the quarantine requirements. If the personal information is not from you, maybe someone is stealing your identity. Hence, you must tell us your ID and we will check’.

“I was confident that I had done all the right things both in China and Australia (eg: obtained permission to leave Hubei, declared my personal health to customs before departure, stayed at home in isolation etc), so I doubted what he said, refused to provide my ID, and asked him how I could believe that he was from the Chinese embassy.

“Then he sternly told me: ‘You can check this phone number from the official website. If you still refuse to provide your ID detail, you will be arrested immediately. Also, you may face expulsion’.

“I started feel a bit worried and scared, but still doubted it. So I said ‘Give me some time, I’ll check this number, and you can call me later, then I hung up the phone’.

“While I was Googling the phone number, he called me again and ordered me to provide my ID immediately, otherwise the police would forcibly detain me.

“Fortunately, I quickly found the official China embassy website and the correct number (there was only one digit difference).

“I called the correct number, told them what had happened to me and asked if the embassy needed my ID. The officer said that they won’t ask people to provide ID, don’t worry and that I had done all the right things.”

The Australian Federal Police (AFP) says there are a number of complex social engineering fraud and telephone scams currently targeting the Chinese community in Australia, particularly international students, including what’s known as the ‘Chinese embassy scam’.

If you think someone is trying to scam you, or you’ve been scammed, the AFP advises to cease all contact with the scammer and contact your local police or consulate immediately.

For more information on scams, how to report them and tips on how to protect yourself, visit the Federal Government’s Scamwatch website, the ACSC’s CyberOAK page, the ATO’s verify or report a scam page, or contact your local police station. Further information in Mandarin can be found here.