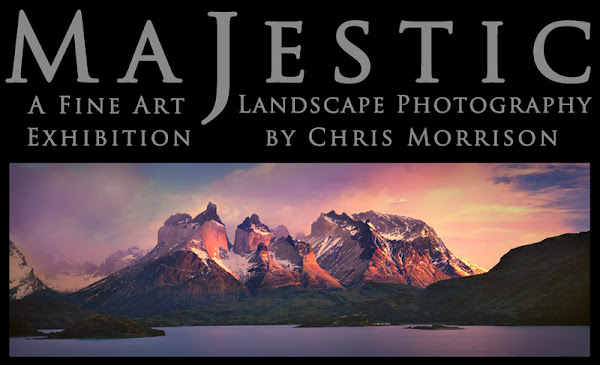 Belconnen photographer Chris Morrison has sent in this info on his upcoming exhibition:

In 2009, I planned a 92 day trip with my wife through 2 continents and 17 countries we had never been to before, to explore numerous unfamiliar landscapes, cities, languages and cultures. We spent 10 months on and off planning the big adventure, sat through 82 hours on flights, over 110 hours on buses, and caught 160 trains on our journey which took us over 60,000 kilometres round the globe. Of all the places we visited, some of my favourite locations and landscapes included the Swiss and French Alps, the Italian Riviera, Slovenia, Isle of Skye, the National Parks of Chilean and Argentine Patagonia and the highlands of Peru.
Canberra Times quote: “Morrison’s world adventure, which he did with his wife, Julie, in 2009, opened his eyes to the exotic landscapes that eixst outside Australia. Some fascinated him, others he never knew existed. In the end, he developed a connection with most countries and hopes that comes through in his work”. (published in Times2, Monday August 29 – Canberra Times author: Jacqueline Williams)
Further information on “Majestic” can be found at www.chrismorrison.com.au/exhibition. You can also browse more of Chris’s images via his gallery: www.chrismorrison.com.au/gallery.

Love your work. Will definitely be at your exhibition later this month.

Mike of Canberra - 33 minutes ago
Mr Parton, you are not a social worker, you are a politician. As such, you are well placed to demand a complete overhaul of H... View
Sport 3

@The_RiotACT @The_RiotACT
Ainslie Bull has been crowned winner of the 2021 Danielle Cleary Events Model Host Search, and will now be mentored as she continues her modelling journey https://t.co/3PYLNf3FRt (24 minutes ago)