Man, 46, dies after collision with truck near Yass 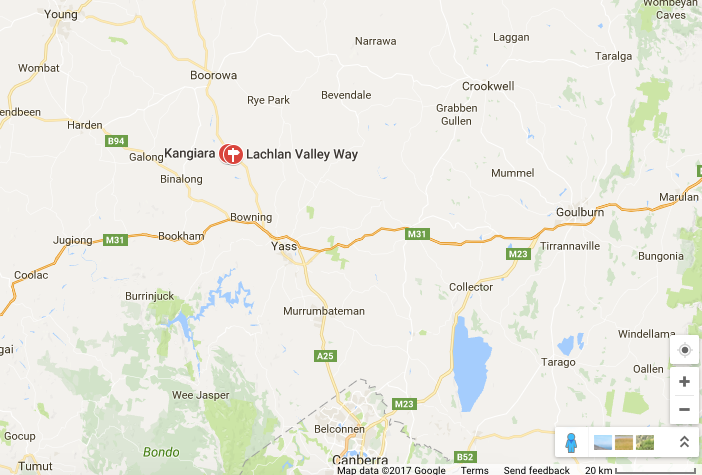 A 46-year-old man from Orange died last night as a result of injuries sustained when the sedan he was driving collided with a truck on Lachlan Valley Way near Yass.

The driver of the truck, a 68-year-old man from Victoria, was treated by paramedics at the scene before being airlifted to The Canberra Hospital, where he is reported to be in a stable condition.

The driver of the sedan died at the scene.

The driver of the truck, a 68-year-old man from Victoria, was treated by NSW Ambulance paramedics before being airlifted to Canberra Hospital, where he is reported to be in a stable condition.

Officers from NSW Police’s Hume Local Area Command established a crime scene and commenced an investigation into the incident.

Police are urging anyone with information in relation to this incident to call Crime Stoppers on 1800 333 000 or use the Crime Stoppers online reporting page: https://nsw.crimestoppers.com.au/ Information provided will be treated in the strictest of confidence. Police remind readers they should not report crime information via social media.

One Response to Man, 46, dies after collision with truck near Yass
Filter
Showing only Website comments

Given the outpouring of grief on another thread about a cyclist’s death, doesn’t anyone care about this fatal accident too?

It’s another regional country road and it occurred at night. Both drivers were a distance from their homes too. There have been a lot of fatal accidents on this stretch.

Andrew Sage - 7 minutes ago
On my ... View
Denise Bourke - 20 minutes ago
We love the work of mower teams and their supervisors. Keep em coming. View
Trish Hunt - 1 hour ago
We just had a week in Canberra visiting our son and we commented on the long grass everywhere we went. I ask if there was a m... View
Public Sector 22

Rick S Tar - 1 hour ago
Michelle Kwan a better camera and or drone would of captured the moment better. Cyber Monday still has some sales. View
Charlie Williams - 2 hours ago
In my time it was up and down all the time and didn't really seem to have anything to do with local rainfall- pub talk in que... View
Charlie Williams - 2 hours ago
Wayne Lutter don't forget Tim flannery - it will never rain again! View
Opinion 58

HiddenDragon - 3 hours ago
With Australia's international border being "thrown open" (as tonight's TV news reports are reminding us) from next Wednesday... View
jorie1 - 5 hours ago
Close the international borders to everyone but Australian citizens! And have strict quarantine for Aussies coming in here .... View
News 17