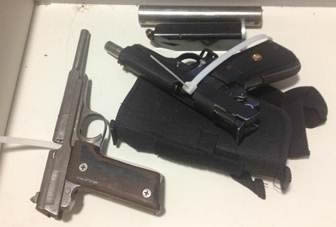 A 46-year-old Duffy man will face the ACT Magistrates Court this morning following a search warrant on a Duffy house yesterday (Friday June, 6).

The warrant was one of three simultaneous search warrants executed by ACT Policing Criminal Investigations detectives around 11am yesterday across Duffy and Wanniassa.

The warrants resulted in the seizure of two handguns, a shotgun and firearm parts along with a conducted energy weapon, knuckle dusters, an extendable baton, ammunition, explosive material and an illicit substance, suspected to be anabolic steroids.

Investigations following the two search warrants in Wanniassa are ongoing.

A 46-year-old Duffy man was arrested and charged following the Duffy warrant in relation to possession of firearms, possession of ammunition and driving while disqualified.

The man will face the ACT Magistrates Court this morning.

Alicia Conley - 10 minutes ago
Liberals on a local level people. Get them in... View
Liz Blossom - 10 hours ago
Jess Puddick to help cover costs :) View
News 5

chewy14 - 29 minutes ago
JWinston, Most people probably didn't respond because the "documentary" you reference was full of outdated, inaccurate inform... View
jwinston - 56 minutes ago
Good luck with that. I recommended “Planet of the Humans” on a thread months ago and the silence has been deafening. I gu... View
Futureproof - 2 hours ago
There's no such thing as zero emissions. Every item you buy has had emissions to create it. The Chinese made windmills, the C... View
Opinion 37

Timothy Bailey - 2 hours ago
The AWM and "ANZAC" are very powerful icons. Difficult to argue with or question. The whole 'Beersheba - last great cavalry c... View
BlowMeDown - 7 hours ago
I think you've just summarised the Labor/Greens strategy re promoting light rail by derailing, as they did, the bus system in... View
Community 23

TimboinOz - 3 hours ago
A Forester is even better. More ground clearance makes it's reach / range into bushland a good bit better. And it's just as g... View
Peter McDonald - 4 hours ago
Michael Bradshaw and it’s EV. View
Julie Macklin - 4 hours ago
The difference here was the Subaru Outback I was following got over that gully...on three wheels with one corner in the air,... View
News 1

Acton - 9 hours ago
An attempt to use a drone with barking dog noises to round up sheep ended in hilarious failure on Clarkson's Farm, now showin... View
show more show less
*Results are based on activity within last 7 days

Concerns about the wait time for a simple surgery to remove her son's tonsils, adenoids and grommets has led to...
Best of Canberra 196

When did the word 'consultation' become the beginning and end of a genuine voice from the community on major policy...
Motoring 24

It's higher off the ground than any of its rivals. It has an all-wheel-drive system and driving modes for deep...
Opinion 28

Here we go again, Raiders fans. The 2021 NRL season started with so much expectation for the Green Machine, but...
Community 23

@The_RiotACT @The_RiotACT
The 2021 Kite Festival is an opportunity for everyone to participate in an ancient Indian tradition, and hopefully feel some sun during a winter hibernation https://t.co/hR5Nmvb6Bz (25 minutes ago)