Man I just love this healthy food! Images of Canberra 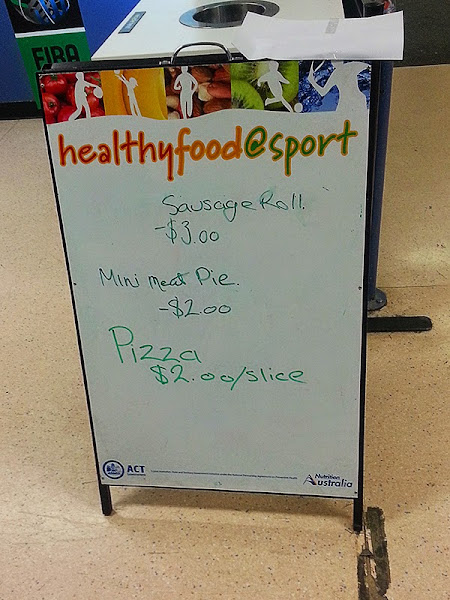 Ben Dover spotted this one:

Healthy eating at the Basketball

They forgot to add chips!

…with vinegar and tomato sauce washed down with a bottle of Coke.

All of those are examples of foods that can be relatively healthy or relatively unhealthy.

IMO focussing on what food is being sold at children’s sporting events is not where the main game is, those kids just burn it off with their juvenile metabolic rate.

Agreed, they do burn it off – my four year old is evidence of that with footy, swimming, gym and general looning about on his agenda right now. However, his footy is sponsored by McDonalds and the tuck shop on game days sells 10 types of crap. We have also just been handed a giant box of Freddo Frogs to sell. I refuse to do that. I’d rather just donate $50.

The food outlet at the Raiders from what I have heard sells crap.

So the take away message is that sport is ok to be associated with crap food. My son’s only four so we have total control of his diet and he’s educated to know already that some foods are not ones that you should eat often. He has no idea what McDonalds is – he has been in there maybe two or three times in his life, but I’ve never told him the name or placed any emphasis on making efforts to go there. He likes it when he does get in there as it has play equipment.

I also do disappointingly note that many parents are pulling out crisps and all sorts at the footy to fill up their kids between halves instead of a banana, a healthy sandwich or at the very least something shop bought that is moderately healthy and lower in calories.

All of those are examples of foods that can be relatively healthy or relatively unhealthy.

IMO focussing on what food is being sold at children’s sporting events is not where the main game is, those kids just burn it off with their juvenile metabolic rate.

They forgot to add chips!