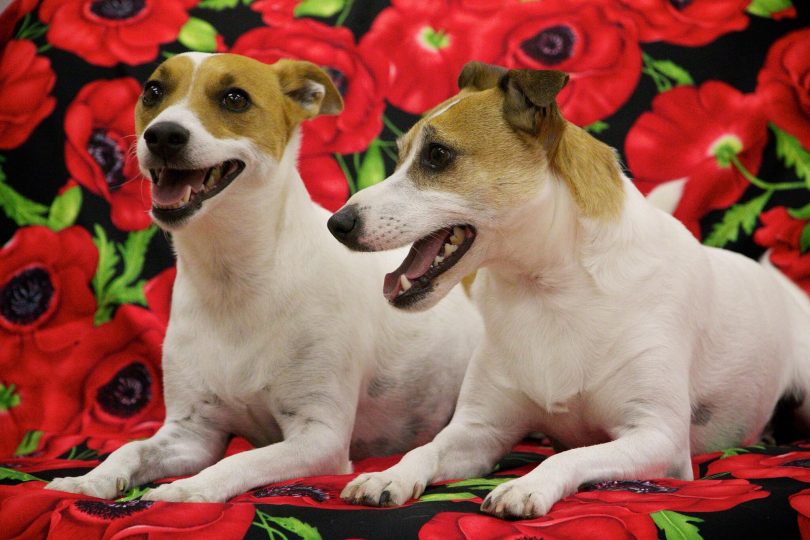 Bella (left) and Ruby have two of Canberra’s favourite dog names. Photo by Maelyn Draper (previously used for the month of April in a fundraising calendar).

‘Bella’ is Canberra’s number one dog name according to a list of top 10 dog names for 2018 released by Access Canberra and compiled from information provided in dog registrations.

To top that off, for the third year in a row ‘Bella’ is actually the favourite Australian dog name according to Mad Paws and based on a database of over 300,000 Australian pets.

‘Charlie’ comes in at number two on Canberra’s list and also on the Australian popular dog names’ list.

There are actually a lot of dog names on the Canberra list which sound suspiciously like people’s names – but perhaps it makes it less awkward if you mistakenly call your child by the dog’s name.

Knowing how much Canberrans love their dogs, Region Media thought we’d look at some of the real-life stories behind 10 of the city’s dogs who have the top 10 names. We spoke to their owners to find out all the essential details about their dogs and just how well they actually suit their names.

Below are the results (in top 10 list order) coupled with some cute photos and a whole lot of doggy love. 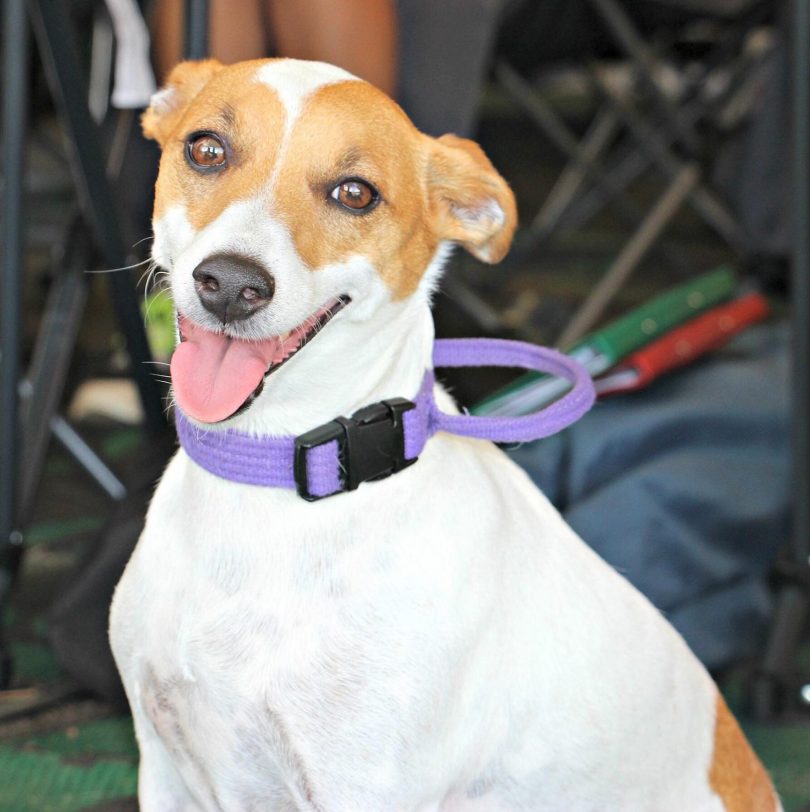 Bella was given her name because “she was and still is gorgeous”. Photo by Cheryl Neal.

Being ‘number one’ is nothing new for sparky little Bella from the Gungahlin area who was Belconnen Dog Obedience Club’s ‘flyball dog of the year’ in 2016 and has also acquired a number of other competition titles.

Owner Janice Gardner said the jack russell/mini foxy cross joined the family in 2011 and is well-suited to her name.

“She was named Bella as it means beautiful and she was and still is gorgeous,” said Janice. 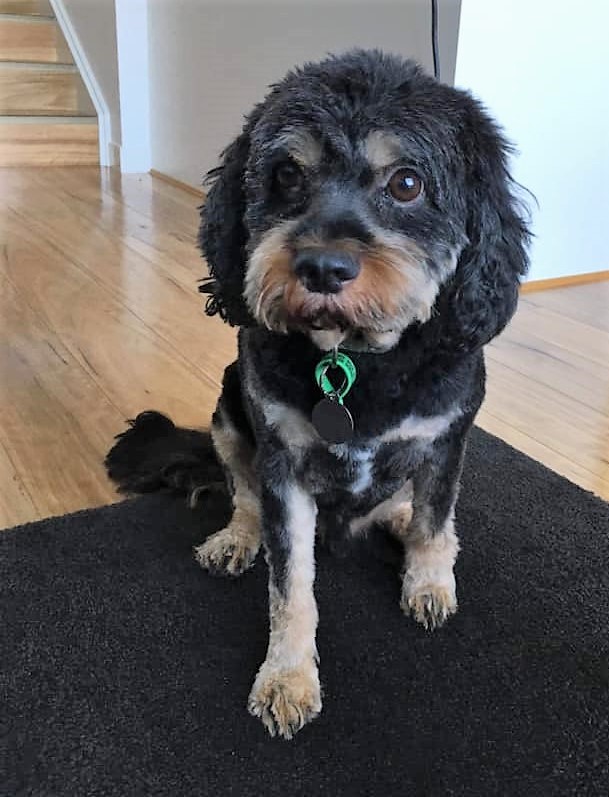 Charlie from Lawson jokingly started out as ‘Charlesworth the 3rd’ before the name was shortened. Photo by Maria Hartley.

Charlie from Lawson is a nine-year-old cavoodle who came to live with Maria and Toby Hartley and their sons when he was 15 months old after they “fell in love” with a photo of him.

Maria said that they didn’t realise at the time that Charlie had spent those first 15 months in a boarding kennel and was “rather traumatised by the experience”.

“It took him six months to recover (we didn’t see him wag his tail for 6 months) but after that, he very quickly got into the swing of being a family dog and is now very happy, but still a bit of a sook,” Maria said.

“He’s very protective of all the family, and loves to sit as close as possible to whoever is home, and it doesn’t take very long for visitors to be considered part of his family!”

Maria said they named him Charlie after joking with their then teenage sons that his name should be based on the Cavalier King Charles half of his breed.

“We joked that his name should be Charlesworth the 3rd and then it became Charlie.” 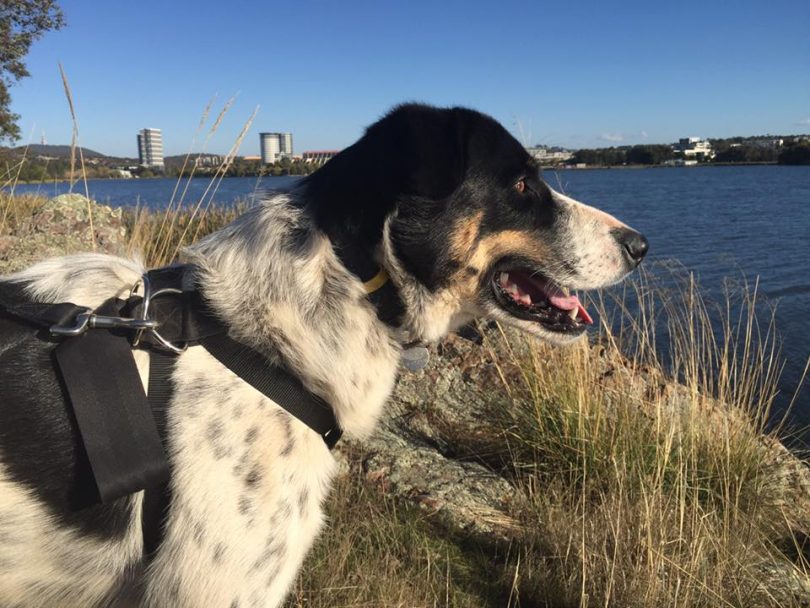 The Spencer family from Franklin have a dog with a name that is Canberra’s third most popular dog name – Max. However, the Spencers didn’t get to name him.

“He’s actually an RSCPA rescue dog and that’s the name that he had before we got him,” said Isobel Spencer.

“It just stuck and just seems to fit his pretty crazy and energetic personality.”

Max was still a puppy when he came to live with the family but the border collie cross has grown into a happy five-year-old. 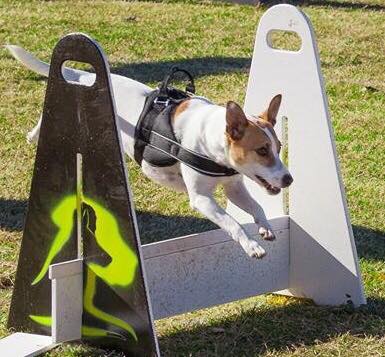 The Gardner family who own Bella seem to have a knack for choosing popular names as they also own a pooch with Canberra’s fourth favourite dog name – Ruby.

Ruby is a jack russell who joined the family in 2012 and is also a member of the Belconnen Dog Obedience Club flyball team – although she hasn’t been as successful as Bella to date due to a hearing problem which makes training difficult.

“Nevertheless she still loves it and chases the ball with great enthusiasm either at the club or at home,” said Janice Gardner.

“She was named Ruby as it just seemed to suit her beautiful nature.” 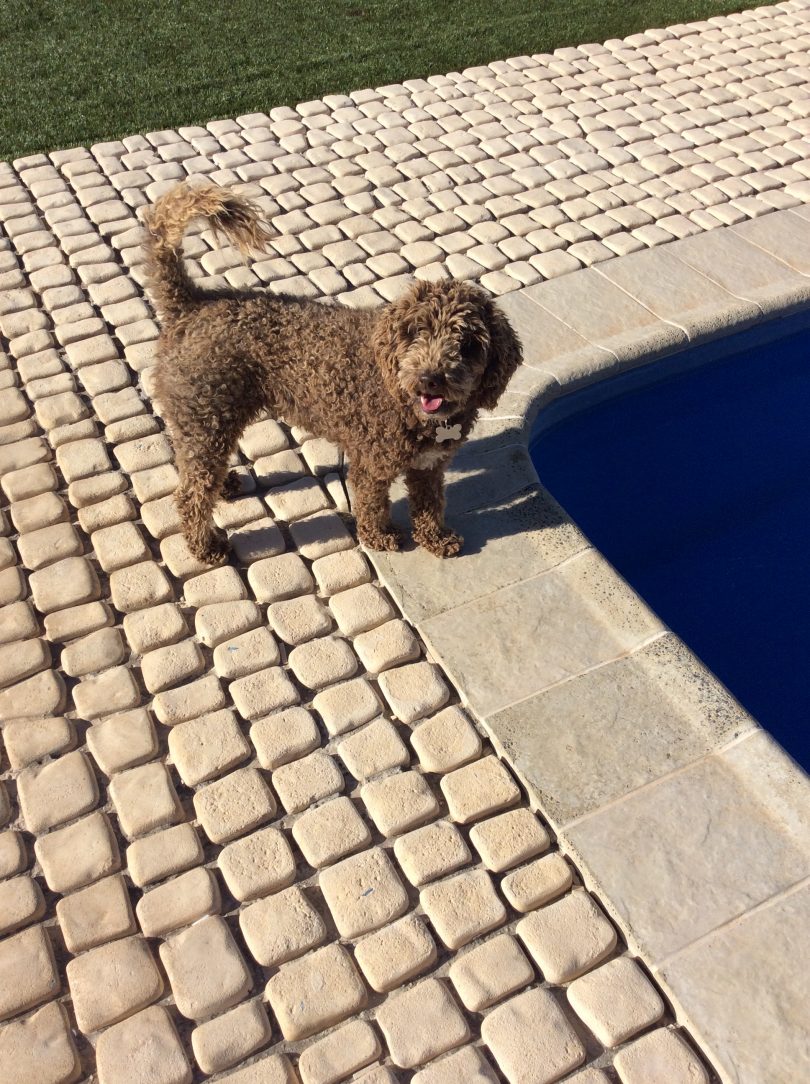 Like her namesake, Coco is a “classy girl”. Photo by Josephine Lemon.

A schnoodle and “clever little minx” from Hall named Coco certainly seems to live up to her name, according to her affectionate owner, Josephine Lemon.

“Like her namesake, Coco Chanel, she is a classy girl and she is also very feisty – another Chanel trait – and will take on animals bigger than her,” Josephine said.

“She will round up the sheep and a few summers back alerted us that there was a brown snake at the back door.”

Josephine and her family got Coco (then aged one) in late 2016 after their beloved dog of 15 years sadly had to be put down. They didn’t name her but think her name suits her perfectly.

“When she is at her fluffiest, I refer to her as the hobo but once she is shorn she is a sleek, chocolate supermodel! Can’t imagine her being called anything but Coco,” said Josephine. 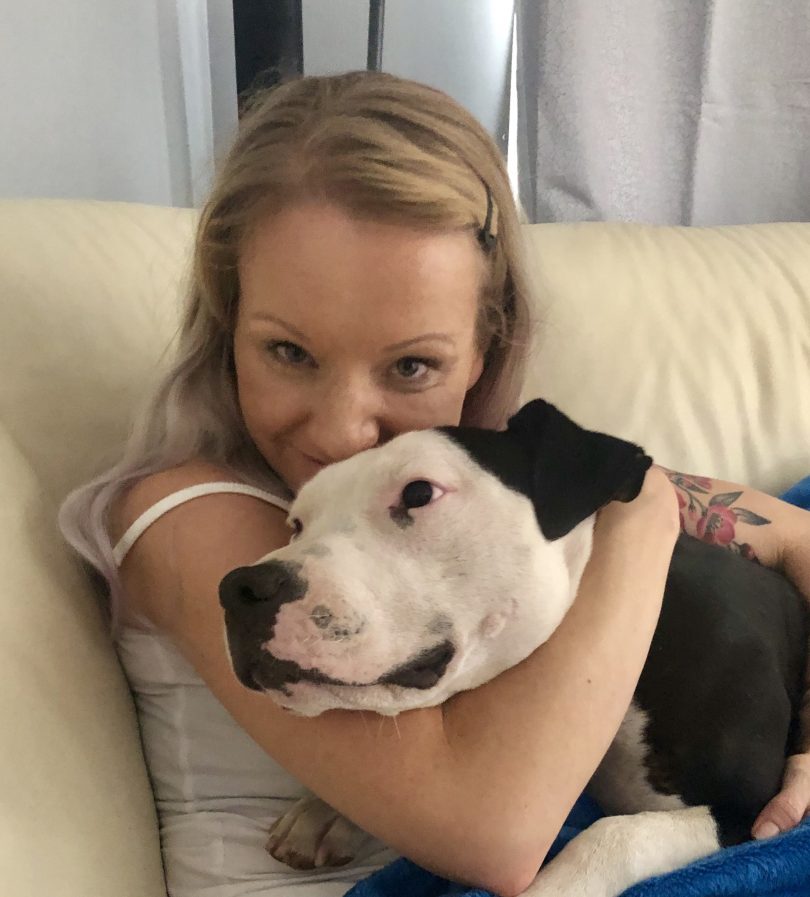 “Buddy is such a love bug – he is everybody’s buddy,” said Jaana who is pictured with him. Photo supplied.

A staffordshire terrier cross from Fraser is also very well-suited to his name, Buddy, according to owner Jaana Surakka and her family.

After the family’s dog sadly died on Easter Sunday last year, Jaana took her boys to Domestic Animal Services to see if they could provide a new dog with a home. They were looking for a big dog but it seems that seven-months-old Buddy picked them.

“He went straight up to my eight-year-old and we instantly fell in love,” recalls Jaana.

Buddy was already named at the time but they could have changed it. However, they decided to stick with the name because it suited him.

‘He is such a love bug. He is everybody’s buddy,” said Jaana.

“He has typical Staffy traits. If he could sit on you all day he would do that. But being the size of a wombat, you don’t want that.” 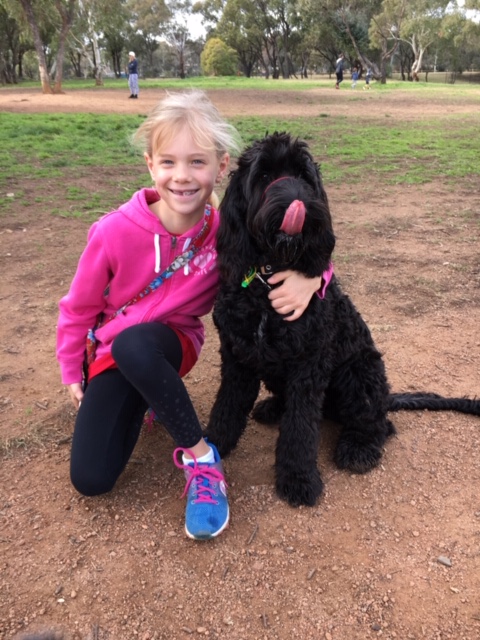 Luna suits her name because she is a “complete lunatic” and has a little moon on her chest. She is pictured here with Trinity. Photo by Deborah Putt.

Luna is number seven on the list of Canberra’s favourite dog names but the number one dog for the Putt family of Wanniassa.

Luna is a groodle who was born in October 2016 and suits her name for a variety of reasons.

“She is a complete lunatic so suits her name,” said Deborah Putt.

“However we chose her name as she was black and had a little white moon on her chest when she was a pup.”

Deborah said Luna is a much-loved member of the family – and particularly with her daughters Trinity and Ella. 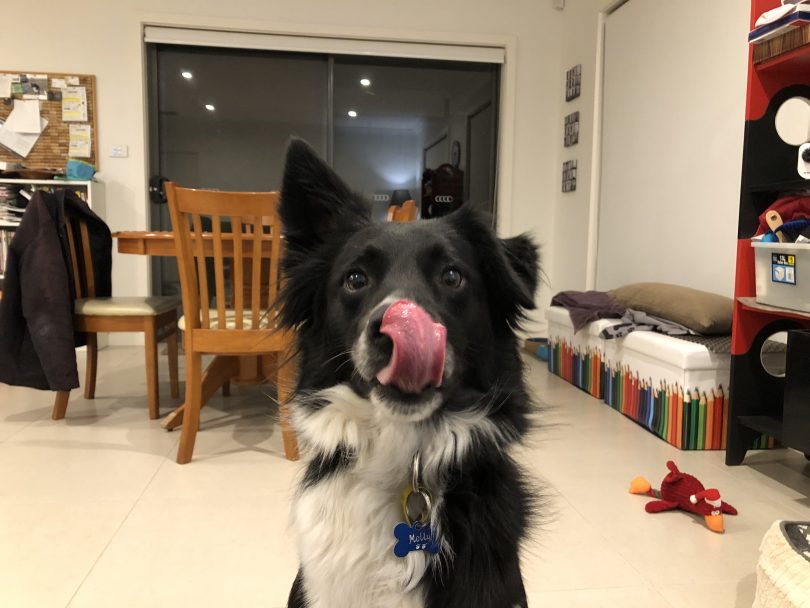 Molly has an “outgoing and exuberant personality”. Photo by Cas Le Nevez.

Owner, Cas Le Nevez, got Molly when she was an eight-week-old puppy in 2015 and came up with the name.

“I picked the name because it suited her when I went to meet her a week or two before I could pick her up,” she said.

Cas said that Molly is incredibly intelligent and has “an outgoing and exuberant personality”.

“She loves toys and playing games, especially when they challenge her to think,” said Cas.

“Endlessly inquisitive and questioning, she is an amazing dog.” 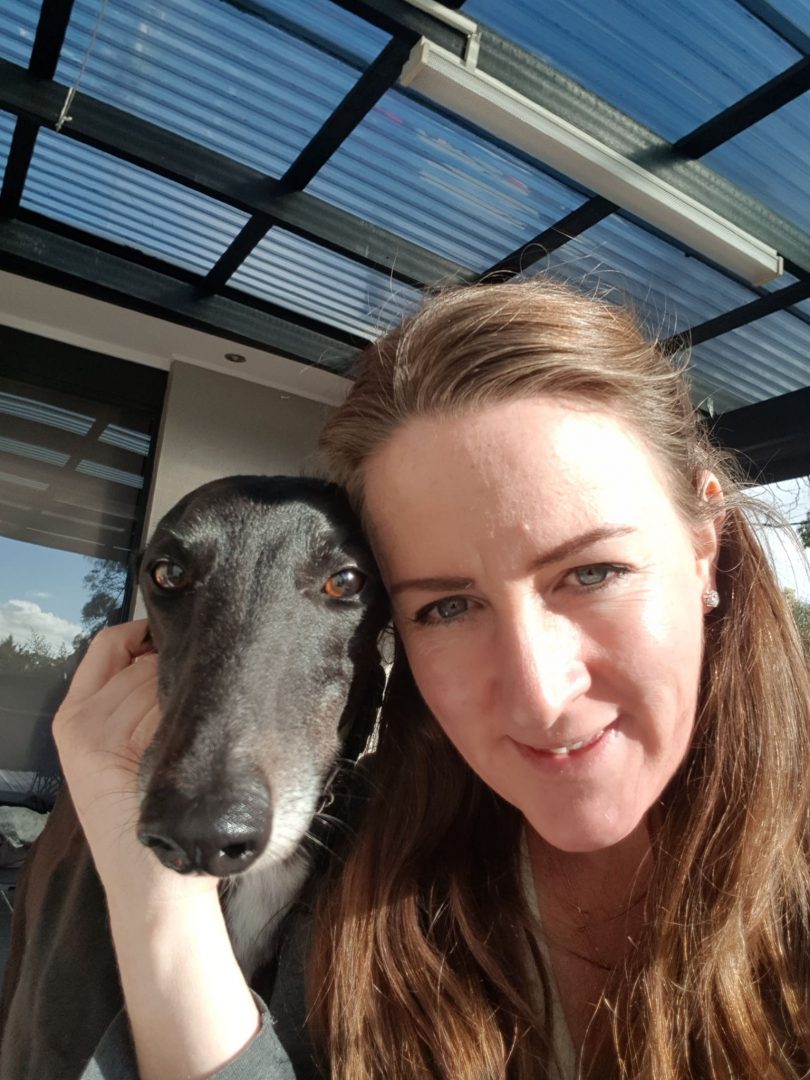 “She’s as sweet as a Rose with the cutest overbite,” said Natalie, who is pictured with her dog, Rosie. Photo supplied.

A five-year-old ex-racing greyhound from Fraser has the ninth most popular dog name on the list – Rosie. However, at one stage her owner, Natalie Hulskamp, thought of changing it.

Rosie, who was a rescue greyhound, was specifically chosen for Natalie by the Greyhound Support Network but was already named when she got her.

“Rosie was named by her foster carer. I originally wanted to change her name but as she started living with us, we decided that Rosie actually suited her,” said Natalie.

“She’s as sweet as a Rose with the cutest overbite that I’ve ever seen and very gentle and affectionate.” 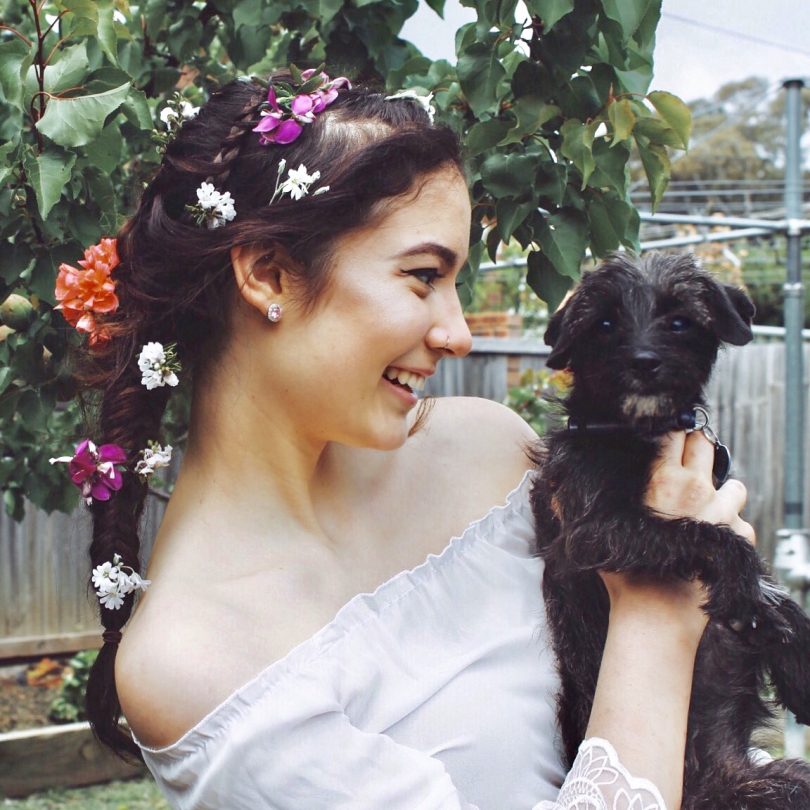 Ann (pictured) says Daisy suits her name because she is affectionate, bubbly and loves to be in nature. Photo by Elsie Lisacek.

Completing the list of Canberra’s top 10 favourite dog names is Daisy and it seems that this sweet name is also completely suited to a young schnoodle from Kaleen.

Ann Lisacek got her three-year-old dog Daisy in April 2016 when she was just a puppy.

“I called her Daisy because I thought it was such a sweet name and because I love names derived from nature,” said Ann.

“Her name suits her personality because she is such an affectionate and bubbly pupper, who loves to be in nature.

“When she was only a tiny puppy, I took her for a walk, and she kept stopping to specifically sniff patches of flowers – including daisies. That’s when I knew I had picked the perfect name for her!”

Do you have a dog with a name on Canberra’s top 10 list? If so, let us know whether it suits its name and why you think the name is so popular. 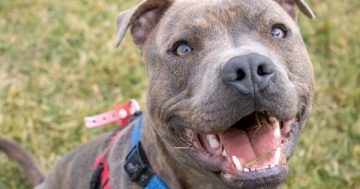 The Staffy is Canberra's top dog for 2021 but what is the top dog name? 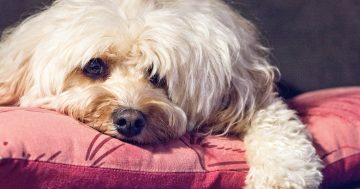 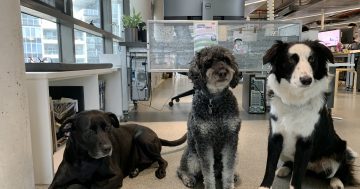 Best friends at work: the rise of Canberra's office dogs