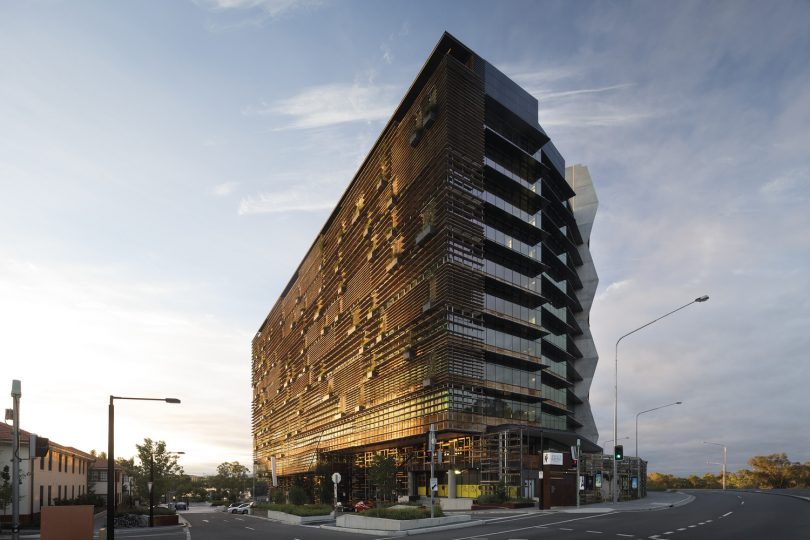 The sale valued Nishi at $12,040 per square metre, significantly higher than the $8,520 maximum for office space attained in the year ending June 2019. Photo: Fender Katsalidis.

The landmark Nishi building in NewActon has been sold for $256 million to ASX- listed property funds manager Centuria.

Owner Molonglo Group announced last month that it was offloading its assets in the NewActon precinct so it could focus on its 14-hectare Dairy Road development. Molonglo was hoping to reap $330 million from the overall sale.

A buyer has yet to be found for the remaining assets, including the heritage-listed pavilion.

The eco-friendly Nishi, which is actually two adjoining towers, is home to the Ovolo hotel, federal government departments, Clayton Utz and the Palace Electric cinema.

Molonglo says Centuria ticked a number of important criteria. “We were impressed with their dedication to best practice property management that puts tenants first. We feel confident that they will treat Nishi and its occupants with the greatest respect,” it said.

“Nishi provides excellent amenity for the NewActon and Civic precincts while the large floor plates create an efficient design that can accommodate a range of government or corporate tenants,” he said.

The architects behind the NewActon precinct, Fender Katsalidis, say the Nishi sale shows the rise in demand for quality and sustainable office buildings.

Equating to $12,040 per square metre, the sale figure is significantly higher than the $8,520 maximum for office space attained in the year ending June 2019 for Canberra Civic, Fender Katsalidis says, quoting research from Savills.

“The Nishi building was innovative for its time and the recent sale echoes the high value still placed on what was produced six years ago,” he said.

“It shows the long-term approach we, along with our clients, take to our projects where they continue to have a positive impact on the building users and communities they serve.

“It’s important to design quality buildings for both today and the future, and we feel we have achieved this with the design and sustainability principles embedded at Nishi.”

Despite its bold design, it was ultimately a passive building in terms of its interaction with the environment, he said.

“The people of Canberra continue to value good design and cultural precincts and this is a winning combination when coupled with sustainability,” he said.

Other Fender Katsalidis projects include the newly opened Midnight building in Braddon, the proposed five-star hotel in Garema Place, and the forthcoming Kingston Arts Precinct.