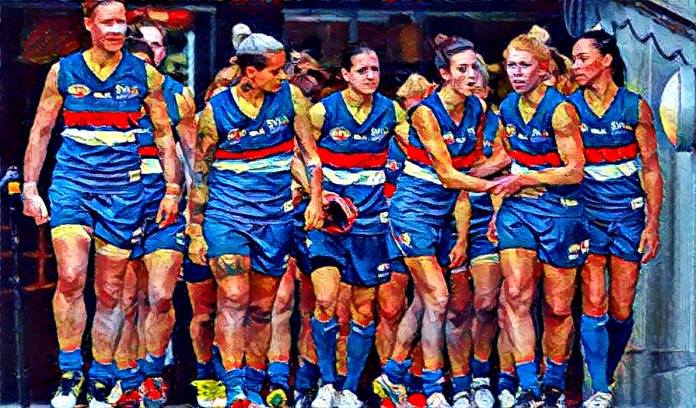 The Aussie Rules community in the Bega Valley and Eurobodalla will come together on Saturday (August 18) to remember two men who had a love for the game and their clubs and battled bravely with Motor Neurone Disease (MND).

The Narooma Lions play host to the Merimbula Diggers; the footie will be the backdrop to an all-day fundraising event for the Fight MND Foundation.

The inaugural ‘Footy 2 Fight MND‘ will see the two teams clash in the last of the regular home and away rounds this season, playing for the Matt Ratcliffe and David Worden Memorial Shield.

One of the event organisers, Melanie Tiffen, lost her mum to the disease six years ago.

“MND has not only personally touched me and my family, but also many people in the Narooma and Merimbula communities with the passing of Matt and David and this is a great opportunity to not only honour them and their fight against MND, but anyone who has been touched by this horrific disease,”

“Raising money for finding a cure for Motor Neurone Disease is a passion of mine.

“As a family we cared for her in the family home until we could no longer accommodate her needs and she spent the last 2 months in a nursing home in palliative care.

“This beast of a disease takes everything from the person who has it apart from their brain and thought process, resulting in that person essentially being trapped in their own body.

“Not only does it pay its toll on the actual person with MND but it also strongly affects those who love and care for the person, continuing long after they lose their battle.

“My family have vowed to help raise as much money as we possibly can to donate to Neale Daniher’s Fight MND foundation as we know that 100% of money raised goes directly into finding a cure.

“Without a cure, many, many more people will suffer and go through what our family has endured,”

This event is not a one-off; both clubs are committed to the ‘Footy 2 Fight MND’ round each year, alternating the hosting between Narooma and Merimbula.

Bill Smyth Oval in Narooma is the venue this Saturday (August 18) from 8 am. It promises to be a full day of fun for all ages, raising money and awareness for this truly worthy cause.

AFL legend Ronnie Burns, who played for Geelong and Adelaide from 1996 to 2004 will also be there to offer his support thanks to LJ Hooker.

“I’m honoured to be involved in such a significant event. Footy is one of those things that brings communities together, but so is a cause like ‘Footy 2 Fight MND’, especially when two communities have been personally affected like the Narooma and Merimbula communities have,” Mr Burns says.

Kathryn Ratcliff, Matt’s sister, is supporting the day and hopes the event will raise awareness and research dollars so that families like her’s can stop the pain and anxiety they live with.

“Way back in about 1975, when I was just 4 years old, my Auntie Norma died. She was only young, in her 30’s and although I don’t remember her, my cousins suffered greatly. She spent her last year or so in bed. Her youngest was only about 8 years old and a few years later ran away from home,”

“In 1977 my grandfather also passed away from MND. I don’t remember him much either, except that I could never understand him. His speech was the worst affected.

“His sister died from MND in 1980. In 1999 my father passed away from MND after a few years of wheelchairs and morphine and bloated feet.

“That was about the time that researchers started talking about the SOD1 gene mutation. You could get tested for that. If you had the mutation, you had the disease. You couldn’t change anything, but you could find out.

“In 2004 my cousin Stephen also passed away at age 42. He was the first of our generation.

“In 2014 my half-brother took his life because he thought he had the symptoms and could not cope with the outcome.

“In 2015 my brother Matt passed away, leaving behind his loving wife Steph and their three amazing children James, Evie and Grace.

“In 2015 Leanda’s other brother, David was also diagnosed.

“Although I am so lucky to have missed the SOD1 mutation, I cannot remember a time in my life where this disease has not affected us. Always there, lurking, pressuring, taking. It is cruel and everlasting.

“It is only in the last few years with masses of help and understanding to dedicate money into research that FINALLY ground is being broken and maybe my nieces and nephews and cousins can be saved from suffering,”

Local Aboriginal artist Merryn Apma is a close friend of Kathryn’s and has donated an original painting to kick the fundraising along.

The painting represents how MND’s impact can be far-reaching, and how it can affect anyone as well as through many generations.

“The large circle is a blooming Desert Rose, with white lines representing the brain, sending signals that something is breaking down, Ms Apma explains.

“The symbols on the outside of the circle are people both male and female, with the smaller Desert Roses breaking away eventually falling to single petals representing how the disease progresses and breaks the body down.

“The small circles around the outside show all the areas working to try and find a cure,” she says.

The painting can be viewed at Merryn’s gallery, Apma Creations and Aboriginal Art Gallery in Central Tilba prior to the event and will be on display at Bill Smyth Oval on Saturday. Ms Tiffen says, “It’s going to be an enormous day and night, and we hope to be able to donate a decent amount of money to the Foundation.”

“We will be raising money throughout the day with raffles, games, a dunking booth, mens, ladies and kids tents, an oyster bar, and of course, an Ice Slide Challenge.

“We are giving away lots of prizes, MND merchandise will be available to buy, including MND beer from Brewmanity, plus there will be a full card of footy matches between Narooma and Merimbula, so we want as many people as possible to attend.”

The Senior Women’s game kicks off at 10:30 am, the Senior Men at 1:10 pm, further information is available at the Footy 2 Fight MND Facebook page.

Michelle Cooper - 6 hours ago
And some of us have both. View
Daniel Duncan - 6 hours ago
Julie because of Covid-19. Once it ends it will go back up. View
JS9 - 7 hours ago
Can someone explain to me why precisely we need a facility to process this stuff in Canberra, beyond some ridiuclous idea tha... View
News 9