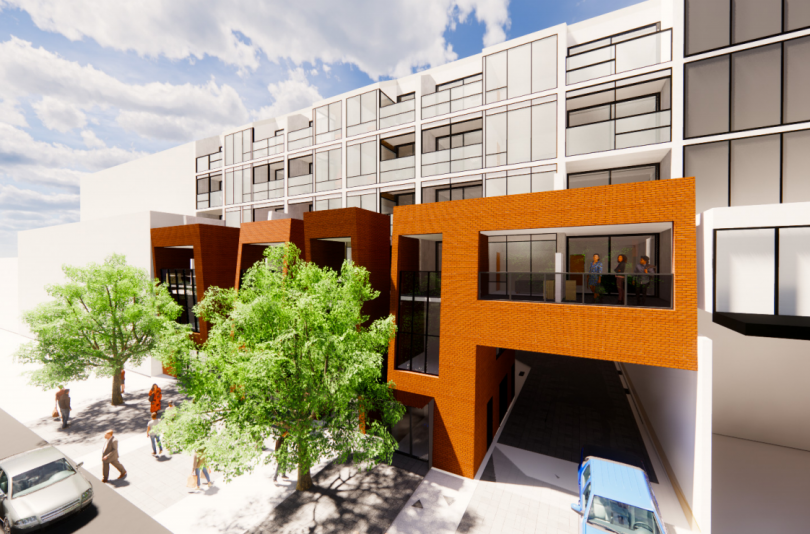 An artist’s impression of the development planned for 42 Mort Street in Braddon. Images: Judd Studio.

A prominent site in Braddon is to be transformed into a seven-storey, mixed-used development with two levels of commercial space topped with apartments.

A development application has been lodged for 42 Mort Street, currently occupied by a two-storey commercial building, with the site described as ideal for a higher density development. The 1530 square metre block was sold last October for $5.3 million.

The proposed $17 million development will have 20 units of commercial space on the first two levels, 68 apartments above and three levels of basement parking, and will continue Braddon’s evolution from a commercial and light industrial area to a hip inner city residential suburb.

A lease variation is being sought to permit residential use as well as a range of commercial uses including an indoor recreation facility, as well as restaurant and retail spaces.

The developer also wants to subdivide the site to allow community titling of the development. 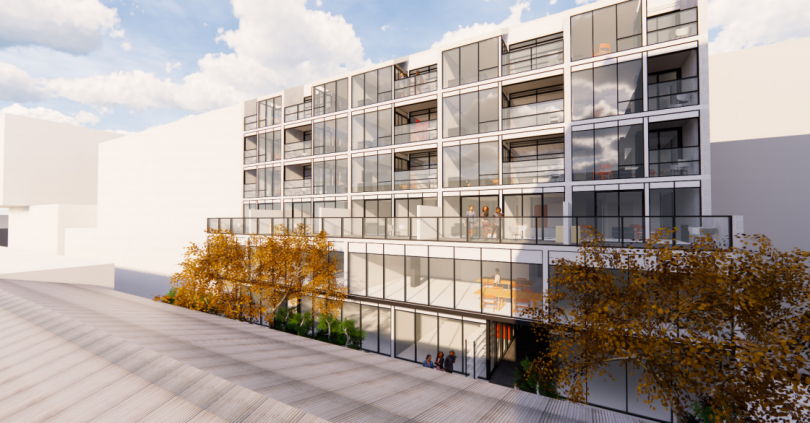 A rear courtyard view of the proposed development.

Designed by architects Judd Studio, the development will be a mix of studio, one, two, and three-bedroom units, the commercial spaces, and roof terraces for recreation, with 109 underground car spaces.

All street trees will be retained, and the central void design will maximise lighting and ventilation in the construction.

“The visually interesting and highly articulated façade will create visual amenity and contribute to the interesting mix of developments within Braddon and make provision for active frontages along Mort Street,” the DA says.

As part of the lease variation, all tenancies must comply with a Noise Management Plan endorsed by the Environment Protection Authority, and implement any noise attenuation measures as required.

Wow it looks so different to everything else in Brandon.

Scott Humphries this typology shouldn’t stand out too much. As it is most of the new stuff in this city is WAY to ‘look at me’

At their best these sort of building form the frame for the public domain....but that requires some strategic thinking by the authorities and some restraint by the developers. Both are in short supply

I don't suppose anyone has a plan to put a decent car park in Braddon? The amount of times I say no to a lunch or dinner there because there is nowhere to park!

Ian one block away from Braddon there's a multistory car park at the Canberra centre. 10 minute walk tops

10 minute walk? That's 9 minutes too long!!! Parking needs to be right outside where I'm going 🤪🤪🤪

Rob Thomas everytime they build another development parking gets worse

There is supposed to be a 300+ space car park underneath the Midnight development on Mort/Northbourne, apparently part of the deal for that block as it's next to the light rail stop.

Ian Burchell could try Uber, we use it all the time to go into Braddon, have never had any problem with them.

Great, another building that provides absolutely no shelter for pedestrians. Yamaroshi anyone? Nibu x Palko? The ACT Government claims they want a sustainable “active” city, but keeps approving developments that are hostile to pedestrians.

And since when was ghastly 60’s brickwork “visually interesting”??

What shelter are you talking about? why should a developer have to provide free shelter for someone that is not using their services? Also the 60s brickwork looks awesome when combined with modern elements

Because the planning regulations require them?
Because most of the other buildings in the area provide shelter, and silly buildings that don’t are actually out of character with the neighbourhood?
Because if the government says it wants to double walking as a primary mode of transport, you need to make it more convenient?
Because providing basic shelter to pedestrians is the norm in actual proper cities?

Samuel Gordon-Stewart - 37 minutes ago
John Hawkins I’m all for optional seatbelts (and optional helmets, for that matter). A spike in the steering wheel, while i... View
Stuart Brogan - 6 hours ago
James Hutchison of only there was a cycle network. View
Stuart Brogan - 6 hours ago
Carole Ford you are close, except cycling is actually not that dangerous, it is sold that way. The life expectancy of a cycli... View
News 19

Not to be repeated, modern spacious living set alongside Canberra’s rich history