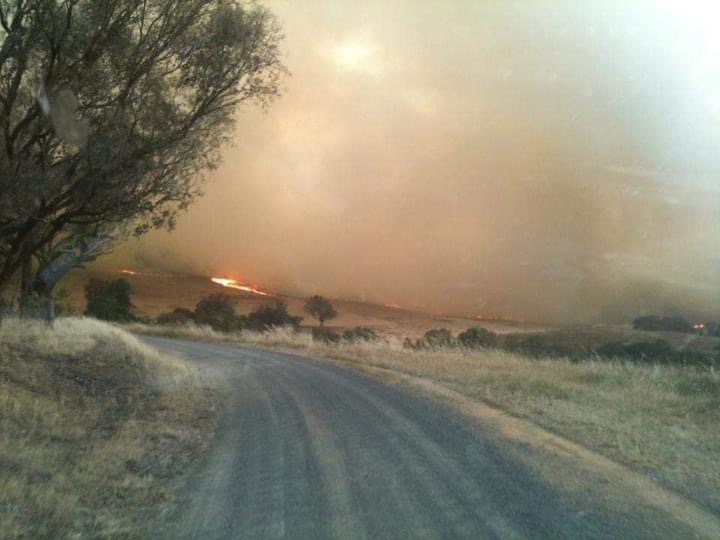 The temperature hit 42 degrees, a gusty 80km/h wind blew and humidity was low. The triple-zero call firies were dreading came at 3:50 pm on 8 January, 2013.

A fire, which had started on the outskirts of Jugiong was travelling at more than 35km/h towards Yass. Smoke had been spotted up at Bald Hill, one of the most inaccessible of areas.

Within the first 20 minutes, the NSW Rural Fire Service had sent three tankers in and a number of private tankers also raced to help.

By 5 pm, 23 tankers were on the scene, near Cobbler Road off the Hume Highway, with 20 homes directly in the fire’s path. By 5:15 pm, the fire was estimated to have tripled in size to 1500 hectares.

By 7 pm, reports came in that 1000 head of livestock had died and although homes were under threat, none had been lost. By 11.30 pm, the fire was estimated at 9000 hectares with 40 tankers and 150 firefighters battling it.

When the sun came up the following morning, it was clear the fire had been slowed by the containment lines built by heavy graders, but it was only 11km from Yass township. Thanks to volunteers, heavy plant equipment and fixed engine aircraft, the fire didn’t make it into town.

The fire was declared contained on Saturday, 12 January, 2013, but the fireground was patrolled for the next 10 days, and officially declared out on Sunday, 27 January.

Fortunately, no lives were lost.

It’s a time Barry O’Mara will never forget. He wasn’t a member of any brigade, he didn’t have to risk his life going to the fireground every day armed with little more than a hand-pump in a backpack, but he did, along with members of his family.

No-one knew the terrain like the O’Mara family, having lived up on Devil’s Pass, on Black Range Road, all their lives. The family property was on top of the hill where Yass River meets Burrinjuck Dam.

“We weren’t official members of the brigade back then,” says Barry. “But we knew the area pretty well so we could help with access.

“You couldn’t get vehicles in there so we walked in to areas where we could see smoke, all of us walking along in a line, pumping out from our knapsacks.

“It was like going back to the old days of fighting fires, but it was the only way. We just pumped as much water as we could.

“On the first night of the fire, if it hadn’t stopped at the river, Yass would have copped it. If it hadn’t been contained there, it would have been in town in half an hour.”

Every day, Barry, his son, nephew and brother-in-law went into the fireground.

“We just helped out in the area where we could because we knew it so well,” he says.

According to Barry, each night they’d return home tired and “have a shower, something to eat, crash out and then start it all over again the next morning”.

“The worst thing was the sore eyes, and you could never get rid of the smell of smoke,” he says.

If the Cobbler Road fire had been categorised like bushfires are today, Barry has little doubt it would have been deemed ‘catastrophic’.

“Trees were just exploding everywhere,” he says. “You can’t stop something like that.”

Barry says despite the ferocity of the fire, no houses were lost and he attributes that to pre-planning done by the NSW Rural Fire Service, which was already based in Yass, and the priority given to property protection.

As Yass marks the ninth anniversary of the Cobbler Road fire, Barry says people should not be complacent just because it has been a quiet start to the 2021-2022 bushfire season.

His advice is to be prepared by clearing trees near the house, cleaning gutters and having water at the ready.

“A lot of people have electric pumps so be prepared that you might need a generator if fire cuts the power,” says Barry.

“If you choose to stay and fight the fire, be prepared that it can be like a war and that it can cost you your life.

“There’s always the risk that the wind will change and your life can be at risk. You may have knowledge of the terrain, but in a fire you can’t see in front of you.

“I’ve seen trucks go into fences or into dams because they couldn’t see right in front of them in the middle of a fire.”

For more information on how best to prepare yourself, your family and your home this bushfire season, visit the NSW Rural Fire Service.

George Watling - 7 hours ago
Unfortunately uninformed (often self-serving) fear mongering about trees has a long history in Australia and overseas. Every... View
News 49

phydeaux - 9 hours ago
"Trade-offs"? As the great Marge Simpson would say, 'Well, duh'. I already covered an example of that in relation to distanci... View
JC - 9 hours ago
They don’t need a QR code system to track you. Anyone who carry’s a mobile phone, even a dumb one can be tracked if the g... View
TheSilver - 11 hours ago
Couple of short points as I don't have much time today: Science publications are currently going through a replication crisis... View
Food & Wine 39

Noel Benjamin - 11 hours ago
A policy resent for the education sector has been required since the Howard government when education was commodified. The ed... View
News 3