I came across this recently. I think it would be a fantastic idea for the use up Northbourne Avenue.

Imagine one day you driving on road, then one huge “moving tunnel” flying overhead, carring with hundreds of people, you may think it is dream, but it is true, soon this incredible Straddling Bus(3D Bus) will appear on streets, this bus step across two lanes with hollow lower part, so cars can pass through, compared with Metro, Straddling Bus has lower cost,shorter construction period and almost same passenger capacity,it’s more economical way of future urban traffic. from this video, you will see how it works, you will be shocked by this innovative way of transportation. 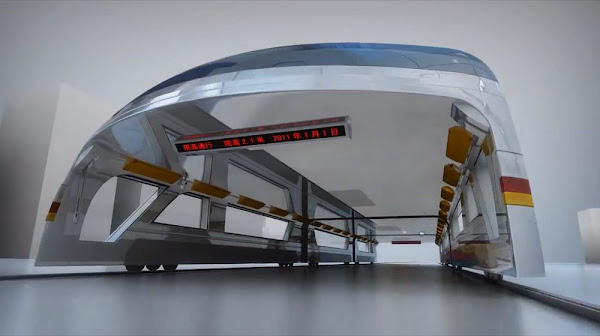 That video reminds me of this one…. http://www.youtube.com/watch?v=AEZjzsnPhnw

That won’t work here. The instructions are in Chinese. Have ever tried to put together anything with Engrish instructions? I bet it reads something like
In road heavy industry follow in path of line over light industries petite car motor very versitile thankyou for buying our product.
What we need is a Monorail. They have them in North Haverbrook, Ogdenville and Sydney and we’re much better than those places.

difficulty level of crossing Northbourne as a pedestrian: boss

What happens when you’re stuck under the bus in your car and need to turn left while the bus is going straight ahead?

Oh yes! that seems like such an easy and inexpensive idea.

So cars pass underneath it and crash into the sides when they want to turn left or right? Yes the normal person would be aware of a hulking behemoth enveloping their car, but Canberra drivers aren’t all classified as normal.

perhaps the cars that are only going straight along northbourne travel underneath but the one that are turning have a lane on either side. Remember that there is a lot of space in the middle for lanes.

It needs to be wheelchair accessible.

I applaud the designers for thinking beyond the conventional, but dread to imagine the utter disaster when this thing wants to take a corner with a road full of cars beneath that WILL go straight ahead.

And what harvyk1 @#10 said re Canberra’s population or lack thereof.

It’s an interesting idea, but I didn’t think that northbourne ave really had the sustained level of traffic to require a mass transit system of this nature to be put in place.

On one side you have the city which is a hub, but on the other side you have Dickson, which is hardly a hip and happening place worthy of a mass transit system style stop.

Thanks to Canberra’s spread out and rather de-centralised design, most public transport options are really going to be point to point of small groups of people, rather than a large group of people all trying to get from the same place to the same place.

I think this contraption has great potential – when they shoot the Canberra-based James Bond film, the evil genius/megalomaniac (possibly a colourful Queensland mining identity) who is plotting to take over the world, one step at a time (Canberra being a good place to start) could be foiled, in the dramatic final sequence, as he rockets down Northbourne with a dirty bomb ticking away. Not quite sure whether George Lazenby would be M or Q.

Yes the normal person would be aware of a hulking behemoth enveloping their car, but Canberra drivers aren’t all classified as normal.

Most Canberra drivers aren’t even classed as drivers.

And I agree, dumb idea.

So cars pass underneath it and crash into the sides when they want to turn left or right? Yes the normal person would be aware of a hulking behemoth enveloping their car, but Canberra drivers aren’t all classified as normal.

Should take care of the on road cyclists quiet nicely to.

It looks incredibly cheap as well!

Should take care of the on road cyclists quiet nicely to.

@The_RiotACT @The_RiotACT
Mothers and children are being forced to sleep in their car as access to emergency housing in Canberra reaches a crisis point, says the @WomensLegalACT https://t.co/xdyOQdAxb5 (51 minutes ago)