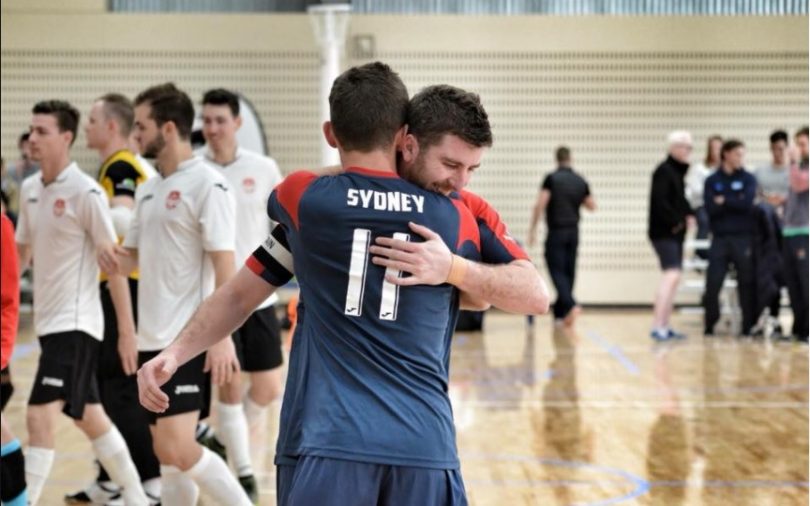 North Canberra Untouchables have continued their incredible late-season form by making their third grand final in the last four years with a win over the Boomerangs White in the semi-finals.

The Untouchables defeated the top of the ladder Boomerangs 3-0 in a dominant display, with two goals from Michael Sydney and another strike from Brett Forward. With the score 2-0, the Boomerangs brought out the fifth man in a last-ditch attempt to get back in the game but to no avail.

NCU continued their incredible second half of the season making it eight games undefeated with only five goals conceded.

The Untouchables started their season very poorly with only three wins from the first seven matches. NCU goalkeeper Ray Moon said that the season took an upward turn after the team changed their playing style.

“We decided that we needed to start conceding fewer goals so now we have every man behind the ball and then counter as best as we can. It was mainly a change in mentality to improve and put an effort into defending rather than attacking and it seems to have made a difference.”

The Untouchables will now take on Canberra Olympic Superprawns this Wednesday night, who according to Moon has been the team to beat for the last six years.

“They have won the last five out of six seasons and the only time they didn’t win was the time we won in 2014. We lost to them once this year but we beat them last time we played so it should be a great contest.”

The second-placed Canberra Olympic Superprawns defeated the Timberwolves 9-3 in their semi-final on Wednesday night (7th of February) to set up a final against their big rivals.

Capital Retro - 1 hour ago
Young people in the building trade can certainly earn heaps as labourers. The problem is that when they are 40yo they are cla... View
Kevin Hodder - 4 hours ago
Xavier Drewitt that's one trade and no shortage of apprentices for that reason, View
Xavier Drewitt - 4 hours ago
37ph + travel ain’t bad for a mature first yr sparkie View
Business 3

Capital Retro - 2 hours ago
This will last until the next pandemic. View
高島智矢 - 17 hours ago
Rental and property prices finally going up. This is great news for us homeowners, not so for the first homebuyers. View
News 2

chewy14 - 3 hours ago
Or just like our own ACT government. No dramas, reelection is almost guaranteed no matter how badly they stuff up or waste mo... View
Stephen Saunders - 5 hours ago
I do feel a twinge (not an avalanche) of sympathy for Our Gladys, who cannot possibly emerge from ICAC unscathed. She should... View
Lifestyle 21

Andrew D'Arnay - 6 hours ago
We live in a free society where you can make your own choices, this is the greatest thing about living in Australia, but thos... View
Elise Kleeman - 14 hours ago
Kriso Hadskini he doesn't have to share anything. Simply refuse to show evidence, of course you would show if you had it so a... View
Peter Marshall - 16 hours ago
Wayne Martin the long term effects of the polio vaccine aren't known. Everyone might drop dead seventy years after receiving... View
Community 75

Dean Buckley - 7 hours ago
Better put some up David View
Doug Jackson - 16 hours ago
Really bad plan. If you need a fence then you may not be paying appropriate attention to your child. Even with a gate somebod... View
News 1

@the_riotact @The_RiotACT
ACT Health has reported 12 new COVID-19 cases to 8 pm last night (up from nine yesterday). Of the ACT's 12-plus population, 89.3 per cent are now fully vaccinated https://t.co/eEqsmqyef5 (1 hour ago)

@the_riotact @The_RiotACT
A group of dedicated #community volunteers in #Weston have banded together to rejuvenate their local Fowles Street park from being overgrown with weeds to becoming a haven for local wildlife https://t.co/CYxMTTXITF (2 hours ago)