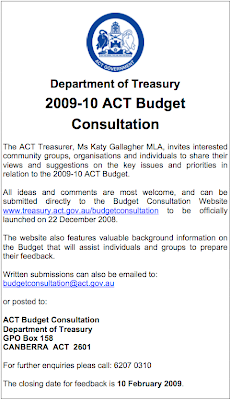 Katy Gallagher has announced that with the budget just passed it’s time to get started on next year’s.

The Treasurer today released the 2010-11 ACT Budget Consultation paper to start the process of engaging the community in a conversation about the most effective use of government revenue and possible future savings.

“The 2009-10 Budget was developed in the context of an unprecedented fiscal shock to the Territory’s budget as a result of events in global financial markets. As a consequence, the Government needs to find $178 million in savings by 2012-13,” Ms Gallagher said.

“The Government is tightening its belt, and has already identified internal savings through an efficiency dividend and wage restraint. However, these savings alone would not be sufficient to return the budget to surplus by 2015-16.

“It’s important the community is involved in this process. We want to know what Government services Canberrans value, how they’d like to see their money spent and their ideas for achieving savings.”

As the first cutting budget in a generation players are going to need to make very good arguments to maintain their position.

Written submissions can also be emailed to: budgetconsultation@act.gov.au

UPDATED: Thanks to Skidbladnir for noting that the pictured ad, featured on the consultation page, is last year’s in its entirety. The closing date for submissions this year is 28 September 2009.

Well, the last few budget’s consultation submissions were all people saying “No, of course we don’t want less money, there’s a recession coming up. We don’t know exactly when, but we know that we can’t survive one of those if our funding gets cut…”.

So Princess Katy pointed her wand at the horizon of the Land of Servants, waved it three times, and told her constituents not to worry, her friends in the Federales would provide cream and honey for everybody, as they had extra to spare in their cupboards, or were able to produce more honey because they had lots of working bees.
Katy has been waving her wand for months now, but the Federales’ big pot of honey is running low, because there are bee shortages across the Land of Stralia.
Katy’s Federale friends have even had to borrow cream from the Lands of Foreign with promises of giving them back even more cream later on. Their cupboard is bare.

Katy knows that her Servants like cream and honey, but will also eat the flesh of their own kind in times of scarcity. Those people who previously suckled on the public purse for their cream and honey grew fat, and now look mighty tasty if you have an eye for such things.
Katy, thinking herself seperate from the tastes of her Servants, can’t bring herself to kill off her treasured fattened fellows.
But if one of them were to behave badly, or set itself out from the others by looking fatter or tastier, if the People might notice and complain. Princess Katy might be able to use that complaint as an excuse to let one of her Faceless Dark Servants swing their mighty Axe of Financial Responsibility, and the other Nice Servants will not go hungry.
Historically, Hungry Servants tend to find themselves a new Princesses once they have eaten the old one.

Of course we all know Muslims don’t save money they spend it on gold and cologne and mercedes and C4.

Personally if I was Katy I would go back over the last three budgets and remove $50 to $100 million of previous initiatives which are now out of date or were ridiculous in the first place. I can if you like write a list. Last year for example $100 million of new recurring initiatives were added to the Budget I’m sure some pruning could be done now the election is out of the way for a few more years.

Of course the present tactic seems to be wring your hands and wait for someone else to make a decision or reveal the big pot of treasure we lost.

I’m OUTRAGED! Why wasn’t I CONSULTED about this consultation before they decided to consult? Why, there could be MUSLIMS providing submissions for all I know.

This is more a reporting SNAFU on your part than any problem on theirs, Jb.

That document you have a screencap of is clearly information about the FY09-10 budget feedback request session, which ran from 22 December 2008 until 10 February 2009.

We’re currently in FY 09-10 now, taking consultation on priorities to consider in the FY 09-10 budget would be pointless now, considering that the Legislative Assembly has already consulted on it, reviewed the proposal, and made it real.
The file you have so lovingly reproduced here was created on 18 December 2008 and has a great big heading about “09-10 ACT Budget Consultation” too.

Everything else on that website is up to date and talking about FY 10-11, which is the future FY, so worth actually having a contribution on.

The actual closing date for giving feedback\contribution to the current Budget Consultation is 28 September 2009 (nine weeks away), which is printed all over the website you have linked to, in their actual consultation documentation, and except in that (very visibly outdated) document you have made the star of this piece, as that was originally written six months ago for the last budget round.

I wonder if they’ve got time to get it back from the printers.

Michael Ilsley - 5 minutes ago
Privatise education View
Paul South - 3 hours ago
A broom through the whole works would be nice . The whole system is unnecessary complicated. The culture of the whole school... View
Stephen Matthews - 6 hours ago
Paul Leins You can spot ghe sky viewers here View
Opinion 201

Alex Fox - 6 minutes ago
Ali Light Alasady nah that just makes you the angry driver 😌 View
Paul Funnell - 3 hours ago
I have no problem with people doing the speed limit my hate is people doing 10-15 kph under the speed limit for no reason peo... View
Lyn Mellier - 3 hours ago
I've been tooted when indicating, slowing down to turn into my own driveway. Rude impatient drivers on Canberra roads. View
Breaking 22

Bill Gemmell - 2 hours ago
That traffic in Lyons is about to get a whole lot busier with all the construction about to start View
Michael Roy - 4 hours ago
We need to create some LTNs View
HiddenDragon - 5 hours ago
"... and start frontloading infrastructure instead of just thinking about it and retrofitting when demand is overwhelming." W... View
Lifestyle 1