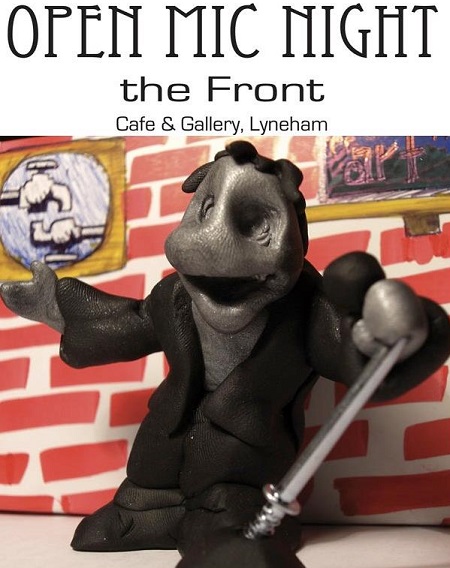 It’s Tuesday night in Lyneham and I’m at The Front trying to concentrate on a novelisation of Doctor Who adventure Inferno (it’s part of the permanent library at The Front and I’ve been reading it in installments). But my mind keeps wandering back to the notes I’ve written for myself: “sky whale, lance armstrong, justin beaver’s visit to the anne frank house.” It’s the last Tuesday of the month, this is the open mic night at The Front and I’ve signed on to try and be funny for five minutes.

The comedians congregate in the centre of the cafe area. I hear someone say “I’m going to do his material but better” and there are laughs all round. Local comedy organiser David Graham is sitting at a table receiving applicants interested in doing stand-up and giving them a slot (right before and right after the break are the controversial spaces).

There are professional and semi-professional comedians rostered but there are also people trying it for the first time. They get the mark “new” put next to their name so the MC will know to go easy on them. Doing stand-up comedy is tough and comedians are gentle with people trying it out. Even the experienced comedians need some kind of fortification, whether it’s whiskey or red bull.

Tonight the MC is Canberra icon Jay Sullivan. He’s been doing stand-up at The Front for seven years with a style that’s a bit like Louis C.K. tweaking on meth: he tells the same stories of frustration and humiliation as Louis but with more of a manic edge. And more screaming. Jay starts things off with the warm-up act and introduces the performers (notifying the audience when someone’s new so we know to be generous). He’s also there to roast the veterans. David Graham in particular copped a lot – comedians, like kittens, show affection by scratching.

As an open mic night the performances were a mixed bag, but not because of experience. Some of the people who were doing it for the very first time did solid sets while a couple of the veterans had a mediocre night. This is a free event and it’s almost a workshop. Most of the comedians who do stand-up here are trying out new material in advance of paying gigs. This is an unofficial guild meeting where comedians can gather, swap gossip and show each other what they’re working on. There were people there for the show but in the end audience and performers were about an equal split.

One of the nightlights of the night – for the people who are involved in comedy – was a parody performance of a former Canberra local who left the ACT to become a professional comedian. This was hilarious for the half of the audience who knew what it was based on. It’s hard to know what people who weren’t in on the joke made of it, but part part of the charm of the open mic night at The Front is the occasional peek behind the scenes in Canberra comedy.

In the end I survived my set (the crowd loved my Justin Beaver joke). I’m still not sure I personally enjoy doing stand-up but a lot of people love the immediacy of bringing their jokes right to an audience – even if it’s an audience of their peers. It’s a fun night but it’s more fun if you’re willing to be an audience-participant and claim the microphone as your own. And it’s comforting to know that even the pros sometimes need a shot of whiskey to get them through their set.

The Front runs its stand-up night on the last Tuesday of every month. Entrance is free, registrations to do stand-up happen at the door.

Sylvia Doherty - 15 minutes ago
Amy MacMillen this is the talk that we went to that I was telling you about. View
Anne Brechin - 7 hours ago
I’m not convinced society as a whole wants to jail 11 year olds. View
Coralee Rauber - 7 hours ago
At age 11 the kids know better. The age should stay at 10 to be sentenced View
Community 92