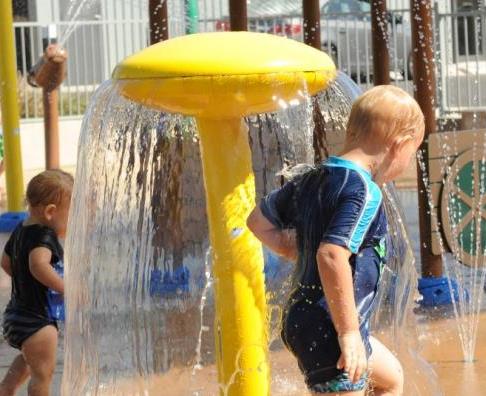 As Canberra heads towards another week of soaring temperatures, the Canberra Liberals say that the national capital should splash out on a free outdoor water park or two that would provide cooling relief and family fun during our increasingly sizzling summers.

The parks – in all shapes, sizes and designs – have popped up across the country in recent years, built and run by city and town councils as part of the public amenity. But Canberra, strangely, seems to be the odd one out, given the latest climate report.

There are dozens of them across Sydney, with 14 in western Sydney alone, and a 15th due to open in February. The Liberals are also pointing to Brisbane and country centres such as Bendigo, Mildura and Hervey Bay.

Opposition Leader Alistair Coe has visited many with his children. He says there would be many people in Canberra who have travelled interstate or come from interstate, who also would have given their family a fun respite from the heat at a splash park.

“A lot of councils have budgeted about 500,000 for splash parks so I think it’s a pretty reasonable investment,” he said. “It’s not prohibitive, it just needs a bit of willpower.”

It’s likely the Liberals will take the proposal into the Assembly this year but at this point, they are sounding out Canberrans on the idea and where they would like to see one, or several.

Mr Coe says a water or splash park could be located in the city centre, Glebe Park, West Basin or on national land around Commonwealth Park, or alternatively in one of the town centres.

Mr Coe says there are many different designs, ranging from shallow paddling pools to play spaces with fountains, jets and slides, and suggests a design competition to select the most appropriate one for Canberra.

“Hopefully you have it in a way that every few years you’re able to mix up the modules and refresh it,” he says.

Pools can be more problematic, but many just have fountains and water immediately drains away to be recycled so there aren’t any safety issues, such as the one at Glenelg in Adelaide.

Mr Coe says that during the winter, the water would be turned off but the park would still provide a play space.

“You just wouldn’t have water going throughout but have other play equipment for kids and families. It’s the same for facilities around the country – outdoor pools only get used for a few months of the year,” he said.

“I think it would get used heavily from October to March, and then depending on how adaptable it is, potentially used in winter as well.”

The Government is currently conducting consultation for the design of three nature play spaces but Mr Coe does not see the water park idea being incorporated.

“It’s a pretty simple proposal that dozens of cities and councils around Australia have already put in place. We don’t need to over-complicate it,” he said. “All over the country they’re very popular, and if they’re designed well they’re relaxing not just for the kids but for the parents and friends while the kids are playing.”

Could Canberra benefit from a water or splash park? Where do you think one should be built?

Weston Park already has ‘a water playground designed for younger children or a wading pool for older siblings’.

The Libs should maybe learn to use google before using their mouths.

They need to replace the Manuka pool with something fit for purpose.

This is what they’re taking to the next election? Bwahahahah!

And shade cloths on public parks!

I like the idea of a splash pool, but it’s a shame that’s the only solution for dealing with global warming the Libs appear to have.

Entire lake smack in the middle of Canberra. Splash around all you want.

City walk civic , just pop up fountained that are OK to walk under 😬

What a great idea👍

Fantastic idea being advanced. One should be installed at Stromlo Forest Park for the young ones to play on while the older ones are huffing and puffing. The older ones could then use it to cool down a bit before they pop a valve.

If there’s space for a water park, then there space for 60 units!

Bendigo has one and it is brilliant and in an area that does not have a pool. It is always busy

Why bother spending taxpayer dollars on something only ten percent of the population will use? Oh wait, the light rail….😂

Michael Blythe if we want to keep families in Canberra you must keep the children entertained otherwise the malls become the centre. That will teach consumerism through boredom.

one northside and one southside

Why build just 1????? Build several and save on the cost for bulk buying!!!

It should incorporate a misting device that will create rainbows on a sunny day.

30 years ago Weston park had beautiful ponds where as kids we would get soaking wet, wish these were revamped into a splash playground.

Trust the Liberals to come up with something like this while half the country is in drought. I’m sure our farmers would appreciate all that precious water going to waste for the sake of winning a few votes

We have heaps of lakes..

Joel Anderson but dangerous for children

Cheryl Zehentner it’s way out. You have to know where it is

Cheryl Zehentner I know but I googled it to find suitable playgrounds when my grandchildren came to Canberra. Decent playgrounds: 3 in the whole of ACT.

Ursula Gamal I think I understand. Have u tried this playground?

It’s completely fenced in. Has nice shades over the park and beautiful grass areas. Has a tiny water park, slides, it’s just amazing. I’ll post a video and a picture of one of the slides and caters for every child sonits awesome 🙂

Melody Atonal true. But it bought it was quite decent 🙂

There is one at Weston Park though.

Ava I used to play at this as a kid, and haven’t seen it in working order in years! Why not revamp it?

my kids love the water play area at Weston Park too.

Dubbo city council has done this well at Elston Park. It’s on a large block of land that also has many BBQ’s tables, 2 lots of equipment, flying fox and lush lawn for ball games.

Yes, I agree. The Dubbo one is wonderful

We need lakea with water safe to swim in like a generation ago.

Lianne Halling you can swim in the lake. Water is tested regularly

Shepparton stopped using their lake as a swimming pool because (among other reasons) the water was not crystal clear and it made supervision of swimmers too hard.

Where the container food place was on LBG. Make it like Muddies in Cairns. So so so good.

Casuarina shopping centre in Darwin has a kid’s splash park within their centre. Such a great idea!

I know by 2020 the oldies are more than the under 65s. You need to keep the younger generation entertained if you want Canberra to prosper.

Wow people say that parties in opposition should have positive ideas. Then when they do they get attacked. I think it’s a great idea. I’d love to see some of the huge rates bills I pay going to something fun for my children

Isn’t there a water playground at Weston park?

They should put them very close to each satellite town centre. They are very popular overseas.

I am a regular advocate for quality community facilities and love splash parks – but can’t really agree with this as a priority. The cost to provide a safe facility with properly filtered water and regularly maintained surrounds would be enormous (someone should refer to the actual costs of the installation alone for modest splash parks in the existing ACT Government pools for a better reference) for what would realistically be a short period of time that coincides with warm weather and holiday periods. As an alternative, for $18.70 a family of five can spend a whole day at the Dickson Aquatic Centre. Splash Park, 3 x pools, bathrooms, BBQS, amenities, manicured lawns & trees, Lifeguards. I realise this is still a cost however pretty great value when you can supply all your own food and drink.

Maybe make it free on the hot days ?

i would rather this, and see the community (especially children) get the benefit of it than more public “artwork”. Just my opinion

Taryn Langdon Dickson pool should pay you for this post 🙂

Matt Donnelly that is a great question Matt, nothings very much free here,well not for long if at all

Your taxes big fella! Where else do you rather your money go?

We need something similar to southbank parkland Brisbane

Both South side and North side should have one, some where near the lakes maybe.

Garema place/City walk – that might increase vibrancy a bit

While you wait, join us over the border at Queen Elizabeth II Park by the Queanbeyan River. It has fountains, bbq facilities, shaded playground, loads of grass, toilets and a table tennis table.

Melanie O’Byrne just be careful of the tiles

trouble is a lack of shade and concrete gets stinking hot