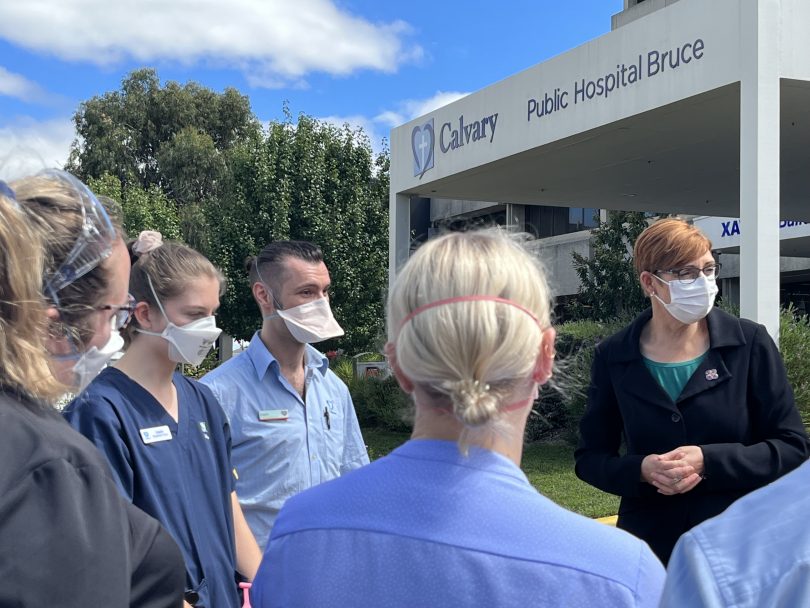 Despite what the ACT Government has to say about improving nurse-to-patient ratios, those working on the ground claim nothing has changed and they are tired, overworked and deserve better working conditions.

Emma* – who reached out to Region Media to discuss her experience working across multiple wards at The Canberra Hospital – said her overwhelming feeling is one of frustration.

“We are consistently short-staffed on every day shift and most people are working doubles to cover the night shift,” she alleged.

“Even on my day off, I’m getting messages asking if I want to work an extra shift. Like, no, I don’t – working seven days in a row is tough.”

Emma said these kinds of conditions are unsustainable and are leading to burnout.

The ACT Government says minimum nurse-to-patient ratios will be ‘fully’ implemented in the general medical, general surgical, acute aged care and adult mental health unit wards – which Emma works across – by the end of the financial year.

Canberra Health Services Executive Director Nursing and Midwifery and Patient Support Services Karen Grace confirmed to Region Media that as of 10 March 2022, the wards listed above have at least one of the three main elements of ratios implemented.

The main elements are the presence of a supernumerary team leader on each shift, the nurse-to-patient ratio itself, and the skill mix measure, Ms Grace said.

“These measures are reported per shift, per ward weekly, and for the week 14 March to 20 March 2022, CHS was 84 per cent compliant on average, across all phase one wards,” she explained.

Ms Grace acknowledged there had been a significant increase in the number of CHS staff members infected with COVID-19 or who are household contacts.

“This has significantly impacted staffing resources across the service,” she said.

Between 21 February and 21 March 2022, 1302 shifts were taken as COVID-19 leave and needed to be backfilled, in addition to the usual rate of unscheduled leave taken for non-COVID-related purposes.

Ms Grace said CHS is aware of the pressure their teams had been under and continued to be put under during COVID-19.

“We have lived through an unprecedented period over the past two years and continue to be challenged by the constantly changing situation of living in a pandemic,” she said.

But Emma claimed she has yet to see an improvement in her and her colleagues’ working conditions, and she can see that it’s having an immediate and tangible impact on patient safety and wellbeing when wards are short-staffed.

“One example might be that it takes longer for us to get pain relief to patients because, you see, with some medicines, it takes two nurses to check everything so you have to wait until someone else is ready,” she said. It also affects how often patients may be showered.

For staff, the greatest impact is on wellbeing.

“Trying to coordinate breaks to ensure there are still enough nurses on the floor is tough – usually doable – but it’s tough and that’s no good for anyone,” she explained.

Despite all this, Emma is clear about one thing: “We just have to get on and do the job of looking after our patients.”

Opposition spokesperson for health Leanne Castley said she was extremely concerned about reporting that nurse-to-ratios are not being implemented.

“This calls into question the government’s commitment to Canberra’s hard-working midwives and nurses,” Ms Castley said.

She said it was further proof the ACT’s health system was broken.

*Name has been changed at the nurse’s request.

These pointed comments, earlier today, from the Queensland Health minister about hospital funding might be a preview of a yet-to-be-made election promise which would go some way to solving these problems –

“We use very poor leased computer hardware that it seems no one will take responsibility to maintain/fix,”.
Yup, agree with you, EMM, The Circle of Doom or battery failure especially during a met call or code black = NOT FIT FOR PURPOSE…………..

We have all worked so hard to keep patients safe, train & continue to support new nurses to be up & running to ease the situation & we also teach students on top of our patient load. We give so much of ourselves, are very tired and there is a personal cost to that. What scares us most is the time when perpaps we can’t carry on and let colleagues down or can’t keep patients safe & the cost to our loved ones. That is why so many are speaking up.
So much paperwork, constant change, so many problems to solve in one shift & everything is our problem, we also have to complete compulsory learning to stay up to date that there is no time at work to stop to do, so we have to do it in our own time. We use very poor leased computer hardware that it seems no one will take responsibility to maintain/fix, not enough junior doctors, they are also overworked and undersupported. I work with brilliant, dedicated people, I know management are trying hard but so many things need to be rethought or resupported after quite a few years of ‘trimming the fat’ – that is time & capacity we had to absorb the unpredictable things that happen in healthcare. The combination of understaffing, extremely high acuity & double shifts are a killer for me. We are a hopeful lot asking for help to serve our community well lest we burn out.

They need to consider alternative methods of health care delivery… I just spent 4 days in hospital receiving IV antibiotics, it could have been delivered by a community nurse visiting my home twice a day or even me visiting a clinic twice a day. Less patients in hospital means better ratios.

Adam Horner still need staff in the community though to do this……..

Nikkie Bondfield ACTH unlikely to make this available. You mat get it if you make a request via Union.

While your at it you may wish to look at Doctor numbers. Just saying.

Maybe they shouldn’t have sacked the one’s who didn’t want the vaccine.?

Scott Abela I’ve heard that some of the unvacced are working elsewhere in the ACT public service. Being as they’re so short staffed.