Perfect storm blows the Brumbies out of the finals

On Friday morning we faced a weekend in which, for the Brumbies to miss the finals, a very great number of things had to go wrong, including their own performance. They were in a great position and masters of their own destiny.

As Foxsports informs us the very worst has come to pass.

The Super Rugby season of the Brumbies is over after victories to the Bulls and Sharks condemned the ACT-based franchise to another year without finals action.

The Brumbies’ loss to the Blues on Saturday afternoon and Queensland’s win over NSW Waratahs saw the Reds jump above the Brumbies to top the Australian Conference and secure a home final.

That left Brumbies in the hands of the rugby gods, needing one of the Bulls and the Sharks to lose or win without a bonus point to scrape into the top six.

But it wasn’t to be as both South African sides won in style to secure fifth and sixth on the ladder.

So well done Brumbies on not being hopeless jokes in 2012, but at least it’s clear more work needs to be done. 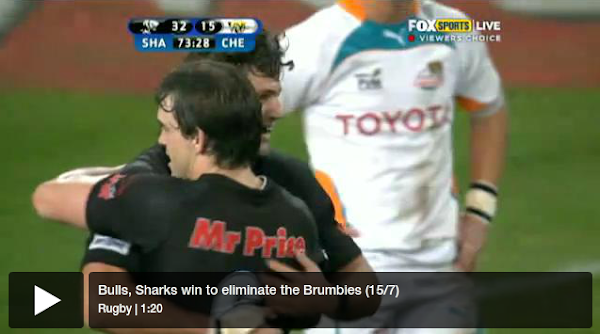 It’s disappointing that they played to pre-season expectations in the last game of the year, against a mediocre team at home. I’ve never seen so many missed tackles in one game.

After what the Reds did to the Waratahs, I guess we don’t deserve finals yet anyway.

Perfect storm is a bit rich. After we failed to take a point against the blues it was more like “required miracle didn’t happen”. The Tahs have been truly awful this year and the Lions and the Cheetahs have been worse than that for a decade.

You have to wonder if running their conditioning for peak performance on Grand Final night was a bit of a mistake.

What do you mean

You have to wonder if running their conditioning for peak performance on Grand Final night was a bit of a mistake.

Jenny Lowes - 1 hour ago
Judy Sheargold Sure Jude, good idea. Will take that being Gospel, from Linda!! View
News 3

ssek - 8 hours ago
More animals get hit during drought because the drainage next to roads is the only place there is green feed. When there is g... View
Karen Feng - 17 hours ago
is this an indication that we do not have enough land fornthe wildlife to thrive? theres this road from holt to Fyshwick that... View
Community 1