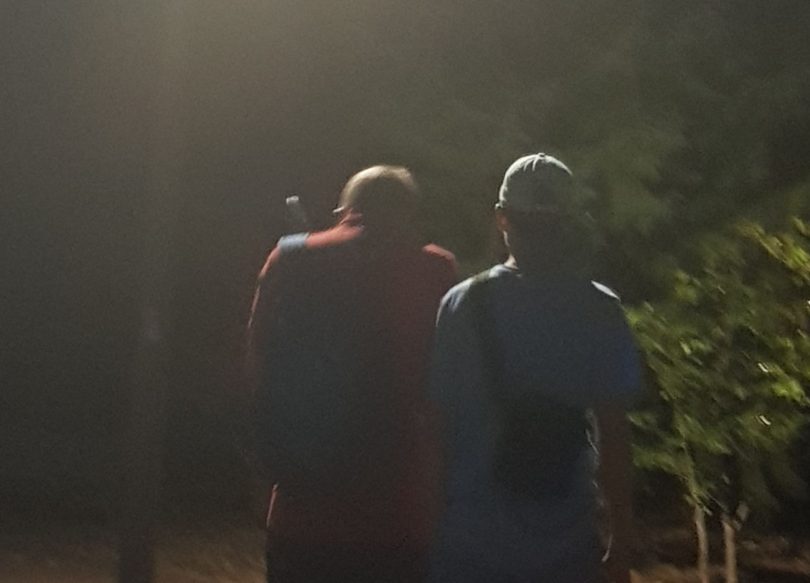 Photos of the men taken from the woman’s phone. Photo: Supplied by ACT Policing.

ACT Policing is appealing to the public for information as they try to identify two men who attempted to rob a woman in Glebe Park nearly two weeks ago.

Around 7:45 pm on Monday the 12th of March, a woman was approached by two men in Glebe Park.

One of the men requested money and after the woman refused, the second man produced a 40cm knife and demanded the woman hand over her mobile phone.

One of the men attempted to grab the woman’s phone, but the woman pulled it from his grip, then took photos of the men as they walked away.

Anyone who may have any information or CCTV footage that could assist police is asked to contact Crime Stoppers on 1800 333 000, or via the Crime Stoppers ACT website.

Police advise that if you are a victim of an armed robbery you should consider your safety at all times, stay calm and obey the offender’s instructions. All armed offenders must be treated as dangerous as some may be under the influence of drugs or alcohol and may react in an unpredictable way.

Pat Smith - 12 minutes ago
Must be coming to see where the bush rangers used to be Will Scott Luke Chalker View
Gaye Ghioni - 20 minutes ago
Emma Boyle of course!! I set the trends, ya know. View
Emma Boyle - 22 minutes ago
Gaye Ghioni maybe he just wants to fo all the places you have been 🤣🤣 View
Lifestyle 6

Louise Armour - 19 minutes ago
Our neighbour-and yes, we have one of Barb's beautiful blankets☺️ View
Jen Wittwer - 25 minutes ago
Louise Armour do you know her? View
Kate Jarman - 1 hour ago
So special. Well done Barb 💜 View
Opinion 101

tuggeranongist - 34 minutes ago
All things being equal, I would prefer to deal with a large institutional landlord than an individual one. I suspect many oth... View
Redgum - 2 hours ago
Better Renting is correct on one point only. The decision to invest in a rental property is a business decision. Investments... View
Sport 119

Graham Smith - 36 minutes ago
Alan all the best. However it happens, it’ll be great to see SFP continue to develop as an outstanding National quality fac... View
Bill Gemmell - 51 minutes ago
I agree in the principle of charging the economic cost of providing a public place to park a private vehicle. But, just can't... View
Geoff Withers - 2 hours ago
Registration charges in the ACT should cover parking costs, its ridiculously high. View
Community 27

James Forge - 1 hour ago
Ben Oostermeyer I agree. The usual excuses of transport costs and lack of competition don't wash when fuel that has to travel... View
News 10

Claire O'Brien - 3 hours ago
My sister broke her back on this same flying fox in the late 80s/early 90s. The drop is too high in areas. My daughter did na... View
Opinion 14

Iain Somerville - 4 hours ago
This is not just about the right to choose to die. It is also about Canberrans being classed as lessen citizens by being deni... View
David Newman - 5 hours ago
Linda, exactly. It’s as if the ACT’s and NT’s residents have a lesser right to self determination than residents of the... View
Dominic O'Sullivan - 5 hours ago
Probably not, Andrew. View
show more show less
*Results are based on activity within last 7 days

@the_riotact @The_RiotACT
The machinery shed is the heart of every farm - it's also the inspiration for a new children's book by Binalong author Angela Taylor https://t.co/5Re2h7YwcX (54 minutes ago)