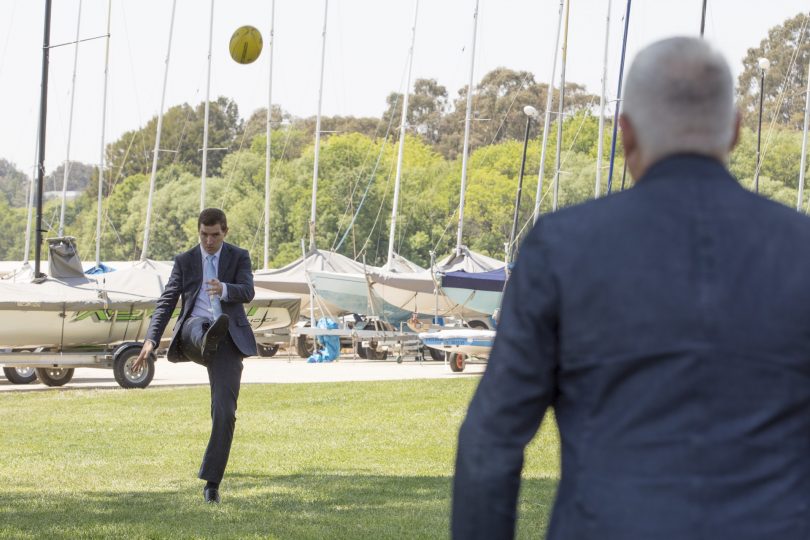 A majority of poll voters believe Alistair Coe is too right-wing for the electorate. Photo: File.

While the extent of internal dissension among the ACT Liberals remains unclear, a majority of RiotACT poll participants believe that current leader Alistair Coe is too right-wing to be electable in the ACT.

The territory goes to the polls late in 2020, and media reports have swirled around supposed tensions in the party room, although MLAs have refused to comment publicly.

Our question was: Internal leadership strife is being reported in the Opposition. Is Alistair Coe the right person to lead the Libs to the next election?

The question prompted some discussion as readers wondered whether the Liberals’ failure to win an election starts in the party room rather than with the voters.

John wrote: “Until the Liberals can get a leader who is more middle of the road and mainstream and able to reach out to a largely left-wing electorate like Kate Carnell was able to do they’ll never be able to win government in the ACT.”

Rob said: “In all seriousness, I don’t see the Liberals winning with Coe at the helm. Make a change, make it soon.”

But other readers objected to the question of Mr Coe’s leadership being raised for discussion at all as a poll question. Mike of Canberra wrote: “You Genevieve and Canberrans more generally need to get over yourselves and accept that, whether it be with Coe or someone else, we badly need change next year and should be prepared to embrace that change.”

Overall, a healthy 1,127 readers cast their votes. Your choices were: Yes, he deserves a fair run and there’s nobody else. That options received 438 votes or 39 per cent of the total.

But the winning option by a clear margin was: No, he is way too right-wing for this electorate, with 689 votes or 61 per cent.

This week, in the wake of the Icon Water Care for Water campaign launch, we’re asking whether Canberra should have permanent water restrictions. While conservation measures have been permanent for some time, current inflows are the lowest on record and long-range weather forecasts offer little hope for the foreseeable future.

The ACT government and Queanebayn Palereang Regional Council, whose Bungendore and Braidwood residents are already on restrictions, are both strongly urging Canberrans to conserve water as dam levels hover around the 50 per cent mark despite the massive Cotter enlargement.

In Perth, there is a permanent winter sprinkler ban for all scheme and bore water users between June and August and a watering roster is in force year-round.

Our question for you this week is:

With a Canberra population of 395,790 each person consumes 523.2573 lt of water per day which equates to 190988.9083 lt per year compared with the average of the whole of Western Australia with water restrictions and arid towns of 231,000 lt per person

With a Canberra population of 420,000 each person consumes 493.0952 lt of water per day which equates to 179979.7619 lt per year compared with the average of the whole of Western Australia with water restrictions and arid towns of 231,000 lt per person

If someone could step up and create a social media campaign similar to the Twitter #notmypm to oust this vile govt Australia may have a fighting chance of slowing down this roller-coaster of natural disasters. These idiots clearly can’t see past their wallets. #… What rhymes with Morrison?

Genevieve, thanks for your analysis of reaction to your previous article, including my own comments. As noted in this analysis, a sizeable number of commenters on that article dismissed Coe as “too conservative” or “too right wing”. Perhaps it’s worth noting that, at the 2016 election, the Liberals were led by Jeremy Hanson, who would hardly be regarded as either “conservative” or “right wing”. They lost badly. But at the previous 2012 election, the Liberals came much closer to winning government than was ever thought possible. Who was their leader in 2012? None other than the much-reviled “ultra-conservative” Zed Seselja.

So it could be asked: what was the difference? Could it be that Zed actually rallied his own party’s base and that far more Canberrans than was ever thought possible were able to embrace his message? Could it also be that, in 2016, Hanson did neither of those things through being somewhat indistinguishable from Barr?

The other thing I’d like to ask about Coe is: what’s he actually done or said as Liberal leader that indicates a hard-right wing bias? Perhaps it’s his policy of freezing rates for 4 years and thus allowing hard-pressed Canberrans to catch up. Maybe it’s the fact that he’s keen to do something different with land management that helps contain land prices and make it easier for young couples, especially, to establish their own homes in Canberra. Perhaps it’s that he generally seeks to make Canberra a less expensive place to live in and thus to reduce the numbers who flee across the border in search of more affordable homes and costs of living.

The man must be a raving loony right wing fanatic!

Donna Arthur - 8 minutes ago
Found some walking around the elmslea ponds. View
Vicky Cook - 20 minutes ago
Thanks to the people doing this as I'm sure it brings a smile to the faces of those who are finding them. View
Christine Barber - 33 minutes ago
Jerrabomberra View
Lifestyle 3

Lisa Greig - 13 minutes ago
Matt Groeneveld I’d hate to have to count them all! View
News 8

Alexei Gorbatov - 34 minutes ago
Why we don’t hear that money go to strengthen our hospitals? View
Susanne Levy - 10 hours ago
Hugh Munro our medical treatments and medications are none of anyones business. It is not mandatory . View
Nathan Burraston - 10 hours ago
Hugh Munro yes I had the Astra Zeneca. That's why I want to get on with it. People who have had 18 months of scaremongering s... View
Motoring 1

Ed N Joanne Towner - 49 minutes ago
Had one of these and it was an excellent vehicle and great to drive. View
Food & Wine 12

@The_RiotACT @The_RiotACT
Construction sites and supermarkets in almost a dozen suburbs, as well as a number of public transport routes, have been listed as exposure locations by ACT Health overnight https://t.co/rSgPZcoRvr (28 minutes ago)

@The_RiotACT @The_RiotACT
Stay-at-home orders mean no more car reviews. Or does it? James Coleman goes on a drive for more milk in his Mazda 6 wagon - and don't pull that face! https://t.co/V2VqT7Osv6 (57 minutes ago)