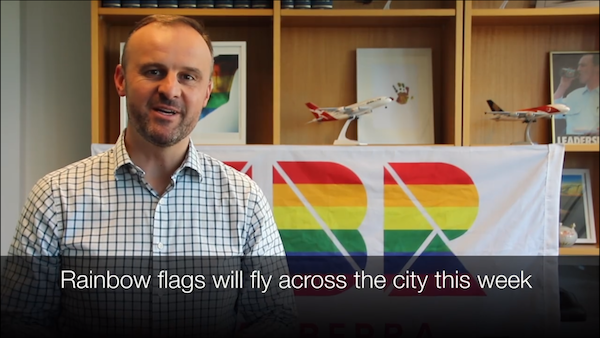 ACT Chief Minister Andrew Barr has taken to Facebook this Valentine’s Day to announce that the city’s flagpoles will bear the rainbow flag all week, partly to show the Government’s support for marriage equality.

The flags will fly on Commonwealth Avenue Bridge and in Garema Place. 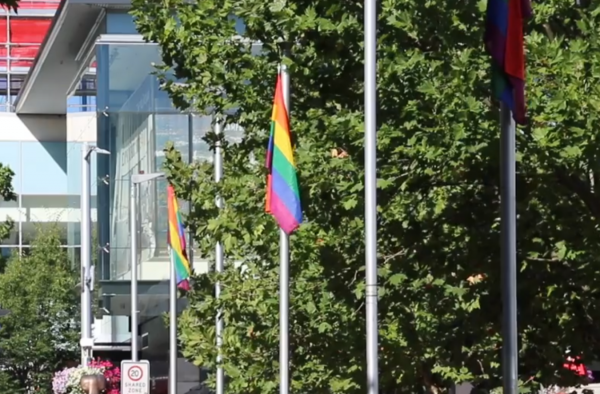 “This Valentine’s Day we’ll be celebrating how far we’ve come as a city,” Mr Barr says in the Facebook video.

“Canberra is Australia’s most LGBTI-inclusive city and we want to celebrate that this week, and also show our support for marriage equality in Australia.” 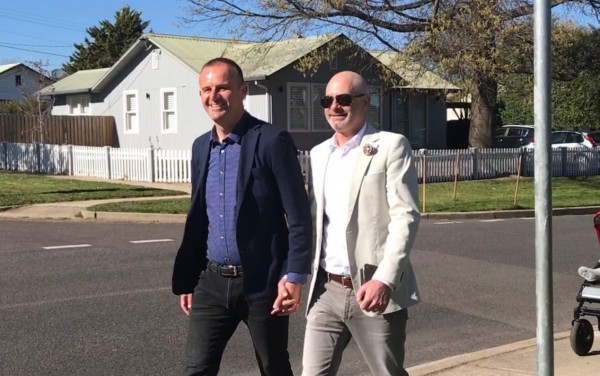 Pictured are the rainbow flags, Mr Barr’s video announcement and Mr Barr arriving to vote in the ACT election with his partner Anthony Toms in October last year.

He didn’t claim that

So when he said “Canberra is Australia’s most LGBTI-inclusive city and we want to celebrate that this week,”, Canberra doesn’t mean all of Canberra, whilst “we” means only the politicians?
I still don’t know how they came to this conclusion. Have there been surveys specifically asking residents if they are inclusive of the LGBTI community?
The Lonely Planet, The Guardian, gay-australia.net, Yahoo Answers and even the U.K’s Independent list Sydney as the number 1 gay city in Oz. Canberra doesn’t even get a mention. The Sydney Gay and Lesbian Mardi Gras trumps anything Canberra has to offer.
I think Andrew Barr needs to get his facts straight.

He didn’t claim that

Well done, Andrew.
You do speak on my behalf

Funnily enough, the homosexual marriage lobby doesn’t agree with you, which is why they are dead against a plebiscite on the issue of changing the definition of marriage.

The “homosexual marriage lobby” are against a plebiscite because it is expected to be divisive, expensive, harmful to the mental health of of young gay kids and wholly unnecessary. Repeated national polls have shown support for marriage equality to sit around 70% in favour and growing. Supporters of marriage equality want the government to pull it’s finger out, do it’s job and legislate. Simple.

It takes the same effort to be tolerant as it does to be bigoted. Actually, being tolerant probably requires less effort.

…and yet you are unable to tolerate a diversity of opinions on what the word “marriage” means – calling people “bigoted” because they don’t share your fringe belief.

I was always, “who cares, doesn’t affect me, doesn’t bother me” about homosexual marriage, until I noticed these kinds of contributions to the debate, at which point I realised that my ethical duty was to support freedom of speech.

Funnily enough, the homosexual marriage lobby doesn’t agree with you, which is why they are dead against a plebiscite on the issue of changing the definition of marriage.

Doesn’t support a public vote on the issue. Desperate to manufacture consent. This is ramming an issue up for debate down Canberra’s throats. Not clear and inclusive thinking at all. Not the way to go.

Unoriginal, sorry Andrew. I’d like to see something other cities haven’t done. Have a brainstorm with the public well ahead next year!

It takes the same effort to be tolerant as it does to be bigoted. Actually, being tolerant probably requires less effort.

We want our political leaders to lead and in this instance Andrew Barr is doing just that.

There is no genuine reason that marriage equality should be divisive.

I accept that Barr has a vested interest on this issue and understand that that may cloud the opinions of some detractors. If that’s you, just go back and read my first paragraph above.

I noticed as I was driving home last night that one of the flags on the Commonwealth Avenue was missing, and the flag pole was tilted (bent). Not sure it was deliberate or whether it was just a windy day?

For those that object (neutral here and I don’t think it’s any better or worse than some other flags that have been flown) I think this is also the flag of the Rainbow Region of NSW.

Agree. I have no opinion on the issue but there’s something not quite right about this. He has a vested interest. Not hard to imagine any politician landing themselves in very hot water claiming to speak for everyone on a similarly divided issue issue.

“Canberra is Australia’s most LGBTI-inclusive city”.
How exactly has this determination been made? Where are the statistics to back up this claim? I also have never been asked for my opinion on the matter, so before Mr. Barr makes such generalizations perhaps he’d like to conduct some research. This doesn’t mean a taxpayer funded junket to San Fransisco with an entourage to do “fact finding” either.

He certainly doesn’t speak for me. I have no desire to celebrate “how far we’ve come as a city” and I am not a supporter of the homosexual marriage lobby.

So they triple our rates and we have to pay for their personal political initiatives as well.