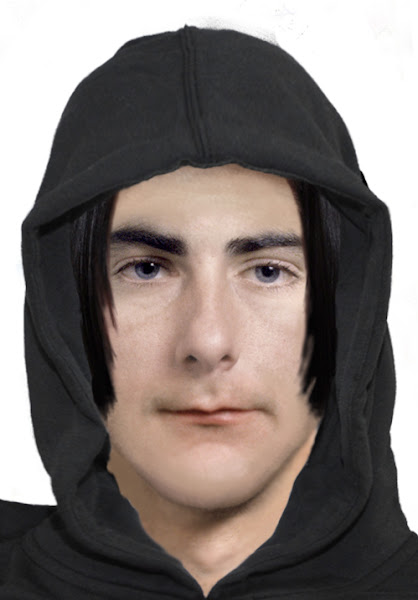 ACT Policing has released a facefit of one of the offenders involved in an aggravated robbery in Ngunnawal on Friday June 21.

Between 5.45pm and 6.00pm, a man driving a red Holden Commodore station wagon along Wanganeen Avenue, Ngunnawal stopped as a man was standing in the middle of the road impeding traffic.

While the car was stopped, another man entered the vehicle and threatened the driver with a knife.

The man who had been impeding traffic then entered the vehicle and demanded the driver take them to Nicholls shops and withdraw a sum of cash from the automatic teller machine (ATM).

The man complied with the demand, drove to the Nicholls shops and withdrew the cash. The two men then demanded they be driven to Gold Creek. The two men exited the Commodore in the car park of the George Harcourt Inn, and fled the area, running towards the Barton Highway.

The first offender (pictured) is described as Caucasian, around 180cm (5’11”) in height with a narrow face and pointed chin, dark eyebrows and believed to be aged in his mid-30s. At the time of the incident, he was clean shaven, wearing black pants, a ‘hoodie’ and black gloves.

The second offender is described as Caucasian, around 170cm (5’7”) tall, with a round face, red “blotchy” skin and believed to be aged in his late-30s. At the time he was wearing a dark ‘hoodie’ and dark gloves.

Anyone who recognises the man pictured is urged to contact Crime Stoppers on 1800 333 000 or via www.act.crimestoppers.com.au. Information can be provided anonymously.

Did anyone else feel like they were reading a scene from GTA at the beginning?

Did anyone else feel like they were reading a scene from GTA at the beginning?

Does anyone else think he looks like he has an IQ so low you have to dig for it?

Does anyone else think he looks like a young Trent Reznor – the Nine Inch Nails frontman?

David Riddell - 4 hours ago
Unless interstate waste is banned from Mugga the waste could still be accepted even should CRS facility becomes operational.... View
Alex Troy Elsworth Adkins - 6 hours ago
Marea Fatseas the site is on the railway line with exsisting sidings thst would allow waste to be transported by rail to Tara... View
JC - 6 hours ago
Maya the land in question used to be a petrol terminal. I wouldn’t call that light industrial and that terminal had been th... View
Lifestyle 1

rationalobserver - 12 hours ago
3 points; No sane person would raise the topic of Defence force help in the same breath as raising the possibility of a law s... View
Simon Lynch - 1 day ago
I'd check the facts first Kerry. At the time there was no fire in ACT and yet your wonderful Administration hired the helicop... View
News 1

Capital Retro - 12 hours ago
Slowly but surely all cell-phone challenged reception areas in our region are being addressed. Last week the new Telstra 4Gx... View
Sport 20

PaulWalshe1 - 14 hours ago
Great article Tim, it was a special day for AFL in Canberra. The ACT had only 3 VFL players - Jezza, Ian Low and Queanbeyan's... View
Business 20

@The_RiotACT @The_RiotACT
Our latest newsletter has all the top stories of the week wrapped up, from the return of COVID-19 to articles about black cockatoos, Tik Tok clips & controversial rock art https://t.co/PHRxmoBngx (1 hour ago)