Seedless you say? Who wants melons? 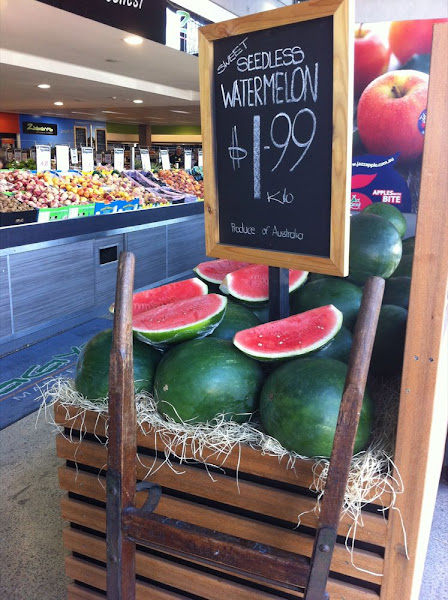 A reader has sent in this melon shot from the Fyshwick markets.

One can’t help noticing the lovely melons appear to have seeds despite the signage.

Can we trust the sign’s promise of sweetness?

14 Responses to Seedless you say? Who wants melons?
Filter
Showing only Website comments

Sorry to digress, though, but I notice Coles are advertising that they don’t “freeze or thaw” any of their fresh produce. I can’t actually think of any fresh produce that can be frozen and thawed and then be passed off as fresh to unsuspecting customers.

I wouldn’t be surprised if it’s just putting an appealing angle on what to some people (like Fabforty) is simply a plain fact.

Similarly, have you noticed all those adverts and labels for chicken that boast about not adding hormones? That hormone-adding was actually done away with in Australia in the 1970s.* But lots of people don’t know that, so it’s easy to make this following of practice sound like a feature rather than standard.

*I know some people don’t believe this law is carried out and are all ‘that’s what they want you to think’, but those people usually don’t believe the labels and ads anyway.

it’s not racist…. it’s just that the darker ones get to camp out (with fire) in fron of OPH and vent their fustrations to tourists who visit this wonderful city, while the white ones get sold for $1.99 per Kg at Fyshwick.

If anyone knows where to get “seeded” watermelon, please advise. I was lucky enough to taste some old-fashioned watermelon about a year ago and it had much more flavour than these new varieties. I had forgotten how much flavour they used to have.

I suppose these may go the way of the giant strawberry, which has somehow reclaimed its taste. When these first hit the shelves, they were bland-as but then suddenly, the genetic modificationarians appeared to hit on a tasty mutation.

Sorry to digress, though, but I notice Coles are advertising that they don’t “freeze or thaw” any of their fresh produce. I can’t actually think of any fresh produce that can be frozen and thawed and then be passed off as fresh to unsuspecting customers.

Ahhh, so the seeds don’t exist because they are black? Racist.

No, the seeds don’t exist because they aren’t black.

Ahhh, so the seeds don’t exist because they are black? Racist.

Seedless is a variety that has been bred to have undeleloped seeds that you can eat. i would be mush more worried about the sign in this same shop that says “hand picked beans”when you can clearly see the cuts on the beans from the machine picker. the cost difference is about $6/kg for hand or machine picked green beans

The point being that you ingest these seeds with the melon. There is no need to de-seed the pink weed

The point being that you ingest these seeds with the melon. There is no need to de-seed the pink weed

For a given value of seedless, obviously.

I vaguely recall asking a greengrocer this question some time ago, and the basic answer was that as the seeds have not fully developed, they are considered seedless.

No, it still makes no sense to me either.

To be honest, the main thing I get from the sign is what appears to be some sort exclamation:

Maybe I’m missing something, but…how do i look at a bigger version of this picture?

You let me know i’ve forgotten to fix the size value!

David Riddell - 2 hours ago
Unless interstate waste is banned from Mugga the waste could still be accepted even should CRS facility becomes operational.... View
Alex Troy Elsworth Adkins - 3 hours ago
Marea Fatseas the site is on the railway line with exsisting sidings thst would allow waste to be transported by rail to Tara... View
JC - 4 hours ago
Maya the land in question used to be a petrol terminal. I wouldn’t call that light industrial and that terminal had been th... View
Lifestyle 1

@The_RiotACT @The_RiotACT
One of Queanbeyan’s oldest ever residents, Linda Moore, died peacefully last weekend at the age of 105 https://t.co/TULostP4NV (50 minutes ago)