Snowy Hydro Southcare Helicopters gets to the snow 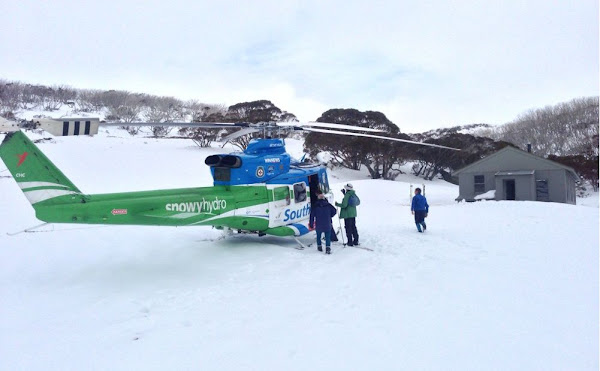 Snowy Hydro SouthCare is letting us know about their latest daring rescue:

On Monday 26 August, the Snowy Hydro SouthCare Rescue Helicopter was tasked to Schlink-Hilton Hut (near Guthega) in the Kosciusko National Park to retrieve an injured cross country skier. The 84 year old male had sustained injuries including possible broken ribs.

He was initially assessed by a passing skier who happened to be a doctor. Using a satellite phone from another passing group they called for medical assistance. The Snowy Hydro SouthCare Rescue Helicopter and the ski patrol from Perisher, along with the police from Jindabyne and Cooma were alerted. Snowy Hydro SouthCare crews located the party at approximately 4pm at the Schlink-Hilton Hut where the patient was assessed and airlifted to The Canberra Hospital.

In the past two years helicopter missions in the ACT and Southern NSW have climbed by 25%, with 498 completed last year and 372 missions performed in 2011 – an increase of 126 missions.

But what I was wondering about was the billing for such a service. As a medibank member am I covered for the use of a chopper as they are very hellishing expensive to operate.

Capital Retro - 14 hours ago
Double handling makes no commercial sense but the ACT government is worried about that. It is more likely that the waste we a... View
Maya123 - 14 hours ago
I have been in Canberra since way before 2008; 1974 in my case, and I always heard Fyshwick referred to as light industrial b... View
chewy14 - 17 hours ago
JC, Except you'll have South Tralee right next to Hume shortly as well and although we've got a border, you can bet those res... View
Business 19

@The_RiotACT @The_RiotACT
The owner of two distinctive office buildings in City West plans a $4.7 million revitalisation for the precinct, with the centrepiece being a new pedestrian plaza connecting them https://t.co/wJkzDPrrJl (34 minutes ago)