Most of the nominees in the Snowy Monaro Youth Awards. Photo: Nathan Thompson SMRC.

The inaugural Snowy Monaro Youth Awards have highlighted the vast contribution being made to the community and the future by teens in towns like Bombala, Jindabyne, and Cooma.

Awards in eleven categories were contested by 49 nominations, with the awards ceremony at the Cooma Ex-services Club one of the highlights of Youth Week celebrations in the Shire.

Snowy Monaro Youth Mayor, Zara Childs says for too long the region’s youth have gone unrecognised, “A lot of people doubt us because of our age, thinking we aren’t capable of doing things, tonight was a chance to prove everyone wrong.”

One of the standouts of the night was the drive and camaraderie of the Leo Club at Monaro High School, with six Leo’s nominated for awards, and the club itself taking out a category.

“I think the Leo Club is a fantastic institution,” says student Miruna Moruz.

“There’s about 20 to 30 students and we all come together to and do great activities, we definitely learn a sense of teamwork and friendship.”

Teacher Lee Riley explains Leo Club is an offshoot of Cooma Lions Club that started in 2014,”It aims to empower the youth of our community to volunteer to serve local, national, and international communities.” 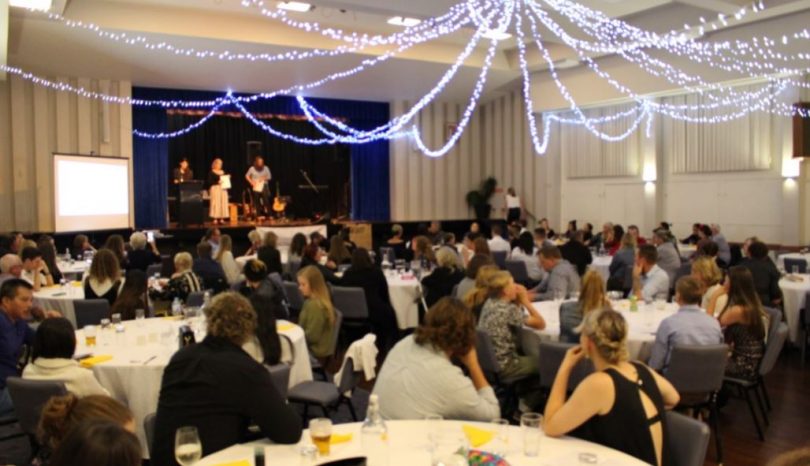 Award nominations were open to anyone aged 12 to 24, picking winners from the 49 entries was coordinated by the Snowy Monaro Youth Council and The Hub Youth Centre in Cooma under the banner of “for young people by young people.”

Amy is in the midst of a traineeship with Snowy Hydro and recognised for her outstanding commitment, innovation and professionalism, she is described as being integral to the organisation.

Laila is a HSC student at Monaro High School and is ranked first in nearly every subject, in 2018 she is also School Captain.

Lucky is a young musician attending Monaro High, his EP “Shaped” is said to be making waves online and he is currently organising a music concert of the same name at school.

Teerna has never allowed her hearing disability to interfere with her motivation to succeed. She has overcome significant barriers in achieving her goals and is recognised for her initiative and personal growth.

Emily has worked on the land her entire life, she plays an active role in the Nimmitabel Show Society and has a great passion for rural life on the Snowy Monaro.

Nic has been recognised for his achievements and contribution to rugby league in the region. Nic was selected for the Canberra Raiders Elite Pathway Program and currently plays in the Canberra competition as well as coaching and volunteering locally.

Blayne was nominated by the Stallions Rugby League Club not only for his passion for the sport but for the leadership role he plays in the community through mental health awareness, study, and employment.

Tai was the driving force behind the 2016 and 2017 MTB Club Race, the success of the event has helped position the region as a destination for mountain biking. His vision is that Cooma is a central hub for the sport between Canberra, Thredbo and Tathra.

The Leo Club meets weekly and often involves commitment in personal time. This youth-led group undertake projects for change within the school and wider community.

Zara is undeniably a young leader in our community, she was recently elected Youth Mayor of Snowy Monaro Regional Council, as well as being President of the Leo Club, and winner of the Cooma Lions Youth of the Year.

Jasmin was the driving force behind establishing the Cooma Interact Club through Cooma Rotary. In 2016 Jasmin travelled to South Korea for the International Rotary Convention, she is also an active member of the Community Chest.

Speaking at the end of the awards night some of the winners urged other youth to engage with their community and honour their own unique identity and talent in the world.

At the Snowy Monaro Regional Council Youth Awards in Cooma with members of the Monaro High School Leo Club.Cheers Ian

Posted by About Regional on Thursday, 19 April 2018

Laila Bradshaw, who proudly identifies as a queer young person says she hopes one-day gender and sexuality won’t be a big deal, “My way of being an advocate for the queer community is being out and proud as myself, trying to live my life as authentically and as honestly as I can.”

“If I make one other person feel comfortable with who they are than I’ve achieved what I set out to do,” Laila says.

Keen mountain biker Tai Haines says he was super excited to hear news this week of the NSW Governments $27 million investment in new trails in Kosciusko National Park, “Get involved with your local club, I am part of the Snowy Mountains Mountain Bike Club helping to improve the trails around Cooma.”

The depth, talent, and passion of young people across the Snowy Monaro is clear and deserves year-round recognition and consideration – one week is not enough, we all miss out.

David Rudland - 24 minutes ago
Wow....really more units. I want to say so much but the words are expletives. View
Cube Starr - 6 hours ago
Being from the Southside and not a fan of horse racing, l say fill the area with high rise apartments! View
News 32

Charles Godworth - 5 hours ago
But with global warming, they'll come back well before they're due and there will still be re-runs of Home and away on the bo... View
Breaking 31

Snowy Monaro Business Awards, and the winner is…