Foxsports tells the tale of our brave lads sticking it to the highly fancied Bulls up on the high veldt, scoring five tries to two, picking up two bonus points, and just barely failing to get the win.

We’re getting a bit sick of heroic loss, but we’ll take this one.

The team went missing for 40 minutes in the middle of the game (as in they were a bunch of individuals and not a team), they gave a try away by not playing to the whistle, and they gave away too many penalties.

So there’s plenty of work to be done, and improvement to come. But two competition points from Loftus Versfeld is a very good result. 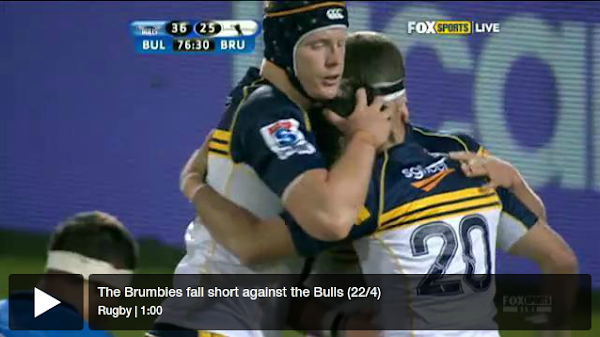 Surprisingly the saffa fans over on Keo are really letting rip at Marius Jonkers and saying the Brumbies were robbed.

Keo is not usually the place you would go looking for balanced commentary either. So you know he really stuffed up if they’re getting in to him!

Having just watched the foxsports snippet of the knock on, I’m completely shocked. It’s got to be the worst, or one of the worst, refereeing mistakes I’ve ever seen. It’s so blatant! I’m not sure how 2 touchies and the ref all missed it. Perhaps the Brumbies ought to don black armbands with the word “Justice” on them next week 😉

There are certain games that you can effectively write-off at the start of the season. The Bulls at Loftus is one of them. To come away from that with two bonus points is great.

And while it is frustrating that we didn’t play the whistle, that decision from the referee was disgraceful.

Surprisingly the saffa fans over on Keo are really letting rip at Marius Jonkers and saying the Brumbies were robbed.

This young team is playing well.
Discipline & some bizarre decisions from the ref cost us.

“That” knock-on & the longest advantages ever……….well!
I can’t wait for the Waratards game in 2 weeks.

Brent Hutch - 1 hour ago
Simon Lynch I'd suggest you need to go check your own facts first champ. Based on your thinking, the ACT should ignore fires... View
rationalobserver - 16 hours ago
3 points; No sane person would raise the topic of Defence force help in the same breath as raising the possibility of a law s... View
Simon Lynch - 2 days ago
I'd check the facts first Kerry. At the time there was no fire in ACT and yet your wonderful Administration hired the helicop... View
News 31

Karin Foxwell - 14 hours ago
Frank Valzano hear hear! As an Art Therapist working with veterans with PTSD I can only imagine how that sort of money could... View
David Stephens - 17 hours ago
But if your head is in the sand you might come a nasty gutser. Moving on has its drawbacks. View
Smackbang - 20 hours ago
What a coincidence - your opinion is also irrelevant, and yet here you are offering it. View
News 1

@The_RiotACT @The_RiotACT
One of Queanbeyan’s oldest ever residents, Linda Moore, died peacefully last weekend at the age of 105 https://t.co/TULostP4NV (6 hours ago)

@The_RiotACT @The_RiotACT
While parents across Australia breathed a sigh of relief when children went back to school after weeks of learning from home, education departments had to ensure schools were COVID-safe. And it wasn't cheap https://t.co/vpuD1LJfd5 (8 hours ago)