Something big at Lyneham flats 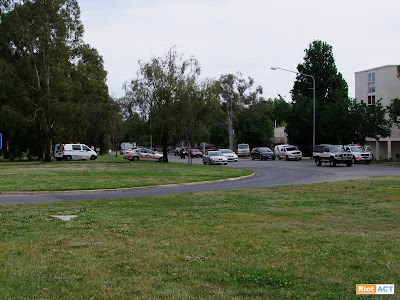 A huge chunk of Northbourne Avenue opposite the Dickson Shops is covered in blue tape at the moment and a very large number of police vehicles are in attendance with the constabulary taking copious notes and talking to a lot of people.

Local residents across the road were out watching the show but when asked what had taken place replied “I don’t know and I don’t care”.

More on this as it comes to hand.

UPDATED: ABC radio news is reporting a stabbing after an altercation between two men.

ANOTHER UPDATE: The Canberra Times has a lengthy report with the implication a 42 year old man might have been stabbed by a 29 year old woman. The ABC story has a link to some video.

FURTHER UPDATE: The police have now issued not one, but two media releases. The first simply details the time of the stabbing and calls for witnesses. The second says a 29 year old woman has been charged with “intentionally inflicting grievous bodily harm and possession of a knife in a public place”.

Yet Another Update: The police have updated the charges they’re now: “intentionally inflicting grievous bodily harm and using an offensive weapon”

Funny how our dogs seem to be barking alot at night, since she has come out, normaly they only bark when there is something out there & i’ll be buggered if i’m going to get up every time they bark…

I have just been informed that this drug addled skank was given bail this morning and released back into the community to offend again…..what the hell is going on????????

The internet has ruined my life.

There should be a government funded hose program for pot smokers.

Not for any reason in particular…stop looking at me like that…I gave up, I swear!

Seriously though, Big Dave, weed isn’t in the same vein (no pun intended) as Ice or heroin. Compare the amount of people who smoke it casually, and those who are addicted. Then make a comparison with Heroin and Ice.

Pot CAN ruin some lives, but then again, so can the bloody internet!

Starscream.. “Houso scumbags, These type of people do not deserve what they are given and should all be locked up or killed. They add absolutely nothing to society, take our tax money and cause nothing but trouble.
All the government flats need to be demolished as 90% of them are nothing but lunatics, junkies and criminals.”

It’s so easy to attack the weak, vulnerable targets. Government housing is for people that, for what ever reason, will never be able to acquire a home. It’s a simple affair, where our difficult, sick, and poor are side stepped. They are provided a basic living environment. Saying they don’t contribute to our society only makes them neutral. Houso scum didn’t bring you this recession. Houso scum haven’t closed businesses or robbed the elderly of their income. Rampant development and greed has. Houso scum haven’t created scum pools of our rivers, wastelands of our forests or poisoned our oceans on an industrial scale. Houso scums haven’t consumed a disproportionate amount of resources per person as you may have. Houso scum, are a very small reflection, of how we as a society live on this planet. Who are the real lunatics, junkies and criminals? For the cause of society’s troubles, you might like to look in the mirror. Your comments have the stench of a scapegoat.

Thats exactly what it is, but there is a new ice on the streets of Canberra (much worse) then the other, if thats possible, don’t you guys read the Canberra Times, I know most of the time their full of bullshit and like to make a story sensational by connecting another story to it!
I hope they catch the scumbags who are making it.

Geez, I dunno. Baringa Gardens was like a warzone. Coppers going in there should have received the AASM.

Something akin to Northern Ireland at it’s worst. I’m glad they flattened that place.

There should be a government funded hose program for pot smokers.

was there another incident there on Saturday arvo? Saw around half a dozen plods heading that way.

Starscream, that’s a major generalization, mate. I’ve known people who’ve lived in flats that are classed as junkie flats because of the cheap rent. None of them were major druggies (well, maybe they smoked a bit of pot, but that’s not real drug use). Not all pensioners will get a house if they want one, pensioners includes people with disabilities and mental health issues.

As always a stupid comment relating to drug use. What would “real” drug use be or is it how the drug is administered?

Seems to me it’s a mistake to “ghetto-ize” people with social problems. Better to sprinkle them through the rest of the community, in amongst well-adjusted (lucky) people demonstrating how to live well, rather than make their own anti-social behaviour seem normal by surrounding them with other people with problems.

i reckon you have a point mate i can remember baringa gardens at melba when i was a young bloke….an absolute disaster area but when the government demolished the joint they just started congregating these people in smaller groups at other complexes throughout canberra…….BIG MISTAKE

Seems to me it’s a mistake to “ghetto-ize” people with social problems. Better to sprinkle them through the rest of the community, in amongst well-adjusted (lucky) people demonstrating how to live well, rather than make their own anti-social behaviour seem normal by surrounding them with other people with problems.

Ta Willo. I hope your mate gets well.

Good point, but a good deal of these people find themselves so far down the line that’s it’s extremely difficult to change even if they want to. Perhaps we should be looking at ways you can sever the bonds lives of heavy drug-use tend to snare people by.

They need to want to change first. You cant force them to be good people.

How will you know they’re cared for?

Why not attempt to change the conditions and lives of the original parents? Why leave them to produce for others to raise?

Im not talking about foster care, im talkign about before it gets to that. Take the kids after they are born and adopt them to a couple who cant have kids or something sad like that. Then you know they will be cared for.

How do you think the kids are going to turn out anyways? junkies and criminals for parents?

Mirjam Herzog - 7 hours ago
Chris Cross' pro argument citing the rates income from diplomatic missions is a highly contentious issue as the concept seems... View
Julia Ross - 16 hours ago
If it gets developed by the usual developers in Canberra, it will be a soul-less concrete wasteland like Gungahlin which will... View
Mark Valerius - 16 hours ago
A great idea for space that’s used for sweet FA. View
News 7

Conrado Pengilley - 15 hours ago
The Chi-Na virus will be contained. View
News 61

Ekaterina Smirnova - 20 hours ago
What could possibly go wrong? View
Christopher Miles Y Lopez - 21 hours ago
The ACT is under the throes of a neo liberal pseudo scientific dictatorship right now. I'm sure that the space that will be m... View
Peter Marshall - 1 day ago
If the magistrates and judges stop sending new people into prison, or expecting remandees to turn up to court, and if no-one... View
News 3

@The_RiotACT @The_RiotACT
Can't find a park at Cooleman Court? A proposed temporary car park opposite the centre in Weston has been almost halved in size and new traffic arrangements devised after community feedback about the project. https://t.co/g1vXahJaHD (2 hours ago)

@The_RiotACT @The_RiotACT
The coronavirus public health emergency has forced the ACT Government to call off Canberra's premier tourism event, Floriade, despite it being not being held for another six months https://t.co/0PJI2cDakg (3 hours ago)