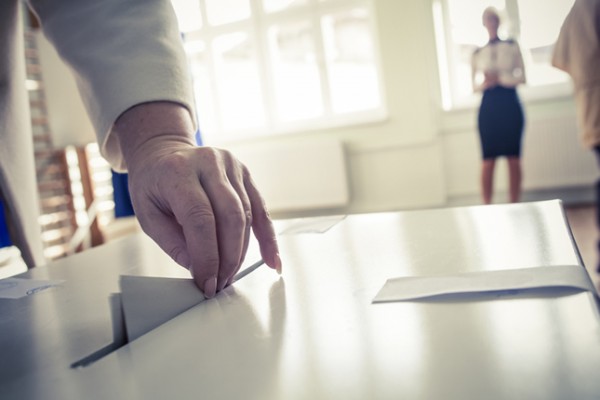 Every four years Canberrans head to the polls to elect a new government, but many of us are just as confused as the next voter about how the Territory’s voting system works.

In a nutshell, each of the ACT’s five electorates will elect five members to the Legislative Assembly for a total of 25 MLAs. They are chosen via the Hare-Clark system – a voting process designed to fairly transfer preference votes in multi-member electorates.

Hare-Clark is a proportional representation voting system, which means that each candidate must currently receive 16.6 per cent of the total votes to be elected.

However, unlike the Federal system, Canberrans cannot choose to vote “above the line” for a single party. Instead, we must vote for individual candidates.

Voters mark ballot papers with the number 1 next to the candidate of their choice, then 2, 3, 4 and so on. At a minimum, voters are told to number as many boxes are there are seats to fill. On other words, five.

Papers will be counted up until the point at which preferences are exhausted, although your vote will still be counted as long as a first preference is shown. There is no maximum number of candidates to vote for, so you can rank everyone on the ballot paper if you wish. 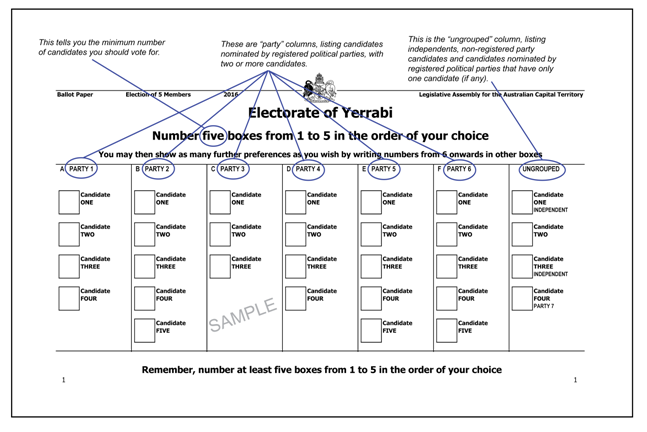 When a candidate receives more votes than the quota required to get elected, their surplus votes are then redistributed according to the preferences recorded by voters.

So if the quota to get elected is 10, and one candidate receives 12 votes, these two votes will be reallocated according to the number 2 preference marked on the ballot, but not at their full value. A second preference vote does not have equal value to a first preference vote.

If another candidate does not reach the quota after all surplus votes are redistributed, the candidate with the lowest votes is excluded and their preferences will be reallocated as well. This process is repeated until five candidates have a full quota of votes and are elected.

If you’re still confused, you’re probably not alone. Elections ACT, which oversees the “festival of democracy” (as Chief Minister Andrew Barr calls it), has made a video that uses visuals to explain how voting works in the ACT. More information and resources can also be found at Election ACT.

The election will be held on 17 October.

My difficulty with Hare-Clarke is that IF that ‘Election ACT’ youtube video explanation is accurate, then the ‘surplus’ is redistributed at a discounted value. To my mind, the whole of a Candidate’s votes ought to be redistributed at a discounted value. Otherwise my vote might elect that Candidate, but yours which happens to be in the ‘surplus’, gets to be redistributed.
My conclusion is that if you vote for sufficiently many Candidates some of them will be elected, and guess what, they’ll ALL be Politicians.
So we’re all stuffed, whatever we do !
Albert Langer was right; but voting for only five Candidates under Hare-Clarke, is only slightly off that mark, if you vote for (say) only women on principle.
(Yes, I have read the fact sheets on Elections ACT, and I consider that they do not sufficiently explain WHAT ‘surplus’ is re-counted at the mathematical discounted value.)
Vote 1 Albert Langer !

I like the fact that I DON’T have to number every square, ie I don’t have to vote for some candidates at all. Otherwise (eg Federal Elections) you end up voting LNP or Labor whether you want them or not (barring the odd very popular independent).

I also detest having to vote for some of the candidates on that ballot paper. However, if you don’t number all candidates, isn’t it leaving the preference decision to someone else? I suppose there’s always a hazard that if your preferred candidate(s) don’t get elected, they could preference out to someone you really disagree with, no?

Electoral reform can make election results much faster: see below. But in the meantime we have to live with the current system.

To guarantee full value from your vote you must NUMBER EVERY SQUARE. If you vote for 5 minor candidates ONLY, they may all be eliminated in the count and so your vote will be TOTALLY wasted.

To get best value for your vote must number ALL candidates in YOUR order of preference. That guarantees that your vote can never ‘exhaust’ even if you vote for all the minor candidates before all the bigger parties.

But even that does NOT guarantee that the election result will actually be fair.

While our Preferential voting systems, whether multi-member Hare-Clarke or single member elections, are the best available, they can wrongly elect a candidate AGAINST the preferences actually voted.

How so? Our vote COUNTING method is WRONG: it can declare a winner on 51% “after preferences” despite eliminating a Candidate who would easily win a run-off election against the alleged “winner on preferences”. This is proved in simple numerical examples at https://tinyurl.com/ElectoralReformOz.

The flaw in our counting system is more likely to give us unstable government because the system favours big parties and it tends to cause governments that change from one extreme to another.

The Average Preference Counting system, as described in the above tinyurl link,
GUARANTEES a fair result and has the bonus that the results of even very close election should be available within hours of polls closing.

A voting system this complex and convoluted and inefficiently counted results in bizarre machinations and outcomes. It also takes far too long to finalise. How long did it take last time to determine all the allocations of preferences?