Experts in buying, selling & renting
Your property, your future
24 November 2020 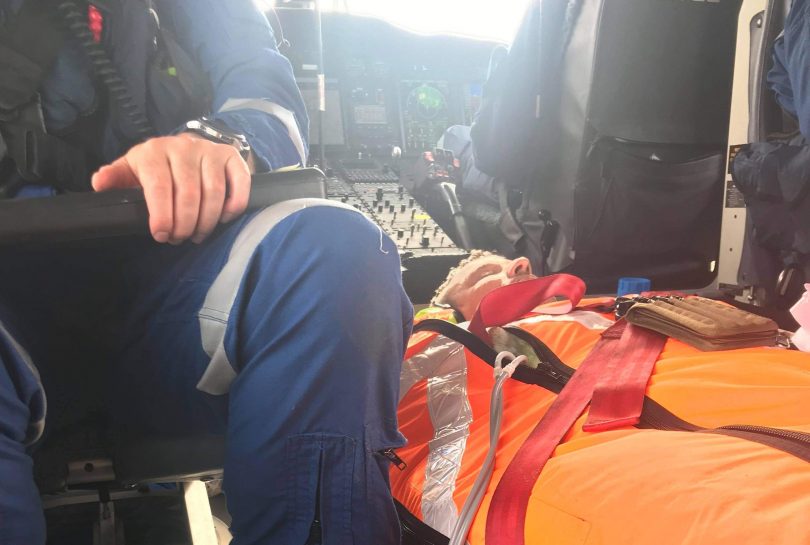 Will in the Toll helicopter heading to Orange Hospital. Photo: Hannah Sparks

On 10 June, I got the call every partner dreads.

“I’ve been in an accident,” said Will.

Then the call cut out.

Mobile signal is patchy at the best of times on our remote property at Bigga, NSW, about two hours north of Canberra.

Will, a farmer, wasn’t calling from the back of an ambulance or hospital, he was calling from the paddock where he had been mustering sheep that morning. He was alone and help was yet to arrive.

I grabbed blankets and water and ran to Will’s dad, Warwick, who lives next door. We raced to the car.

Because we live remotely, we have several NSW State Emergency Service Community First Responders in town who do an incredible job of providing first-aid – often in critical situations – until additional help arrives. One of those is Denise Perry, who owns and lives at the Federal Hotel in Bigga.

I suggested to Warwick that we pick up Denise or call an ambulance on our way to find Will. But Warwick – having lived and farmed on the property his whole life – thought it would be best to find Will first.

“It might not be so bad,” I told myself, over and over.

I knew roughly where Will was and that our neighbouring farmer, Grant Nuthall, was nearby. As we passed his house, I called out to Grant to join the search on his motorbike, which would be faster than us in the utility.

Grant sped off in one direction while we took another, agreeing to beep our horns if we found Will.

His horn raised. Grant had found Will, face down next to a dirt road.

Will’s motorbike had hit a wombat hole while he was mustering and came to a sudden stop. His spine bore the brunt of the impact before he flew over the handlebars.

He’d then made the excruciating decision to crawl and walk for about 700m to find mobile service, knowing the only other option was to lie there for hours until we came looking.

Grant ran back to the house to phone for an ambulance while I covered Will with blankets and touched parts of his legs and arms to see if he could feel them. He could, but his left arm was going numb.

Grant returned to us. “The ambulance is an hour away,” he said.

I thought that would be the case given the nearest ambulance station is in Crookwell.

I wondered how we would get through the next 60 minutes. Will was in shock and in a lot of pain. I didn’t want to move him in case he had damaged his spinal cord. 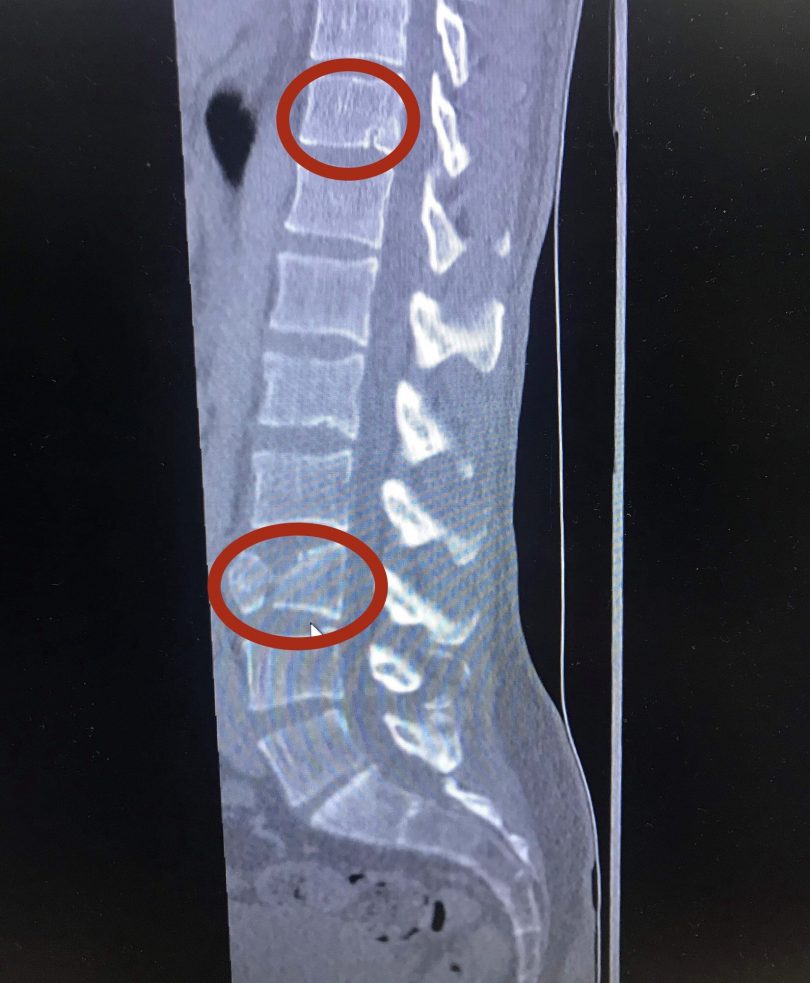 X-ray showing where Will fractured his spine in a rural motorbike accident while mustering. Image: Supplied.

About 20 minutes later, I heard the sound of a helicopter in the distance. It’s not an uncommon sound around here – farmers use helicopters to spray weeds and paddocks with fertiliser.

When the helicopter came into view over the hill, I waved my arms in the air like a mad woman, thinking it wouldn’t be for us but holding onto hope anyway. As the helicopter crept closer, I saw the word ‘Toll’ and realised it was for us.

It was like a flying angel. I’ve never felt more grateful than I did seeing help on the horizon that day.

Denise also arrived to help, along with another SES volunteer, two NSW Ambulances and NSW Police.

Knowing the length of time it would take for an ambulance to reach us, the operator had dispatched a helicopter from Orange Hospital with a spinal specialist onboard. At Orange Hospital, we discovered Will had fractured two vertebrae, but thankfully – and we count our lucky stars – he had done no permanent damage.

Will was in hospital for a week while the doctors managed his pain and organised a brace to wear for the next three months.

Almost six months on, Will is still receiving physiotherapy, but he’s back at work – albeit taking things easy – and life is beginning to return to normal.

We choose to live out bush and wouldn’t change it, but this experience has made us more appreciative of people such as Denise and organisations such as Toll and the Royal Flying Doctor Service that take care of those who live on the land.

Careflight is great to donate to . I’ve given up on salvos or Red Cross…
but Careflight always help when people need it! 🙂