Page four of the CT boys and girls, we’ll make the front page yet! 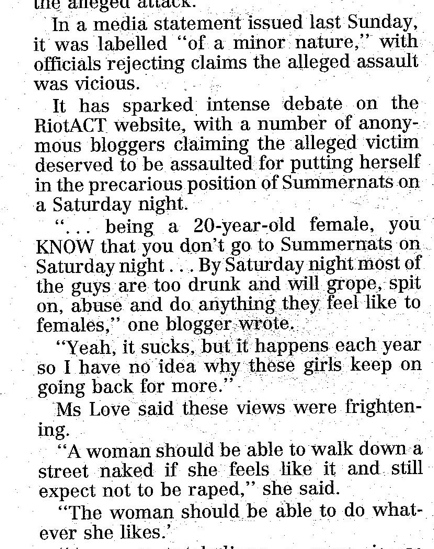 When Schmerica (who I believe is a young woman) commented on the dangers at Summernats a week ago she did worry that she’d cop some flack for her view that women should take some responsibility for their personal safety.

I doubt she was expecting to be described as either an “anonymous blogger” by the Canberra Times, nor as “frightening” by Annie Love of the Canberra Rape Crisis Centre on the fourth page of the Sunday Times.

For what it’s worth Schmerica, we don’t think you’re frightening.

Having said that; thank you Eliza Young for crediting the source.

Oh, wait… what’s that? The online version you say? Miracles will never cease!

63 Responses to The frightening schmerica
Filter
Showing only Website comments

A fair assumption would be that the majority of male attendees at the Summernats work in the factories and workshops of the country. These are generally male domains, females considered an exception.

General lunchtime banter revolves around sport, cars, grog and sex. The lunchroom library will always include a raft of magazines, usually with scantilly dressed ladies on the cover. The cover models are overdressed in comparison with those included inside.

Whithin is a constant and overwhelming message that the ladies are proud of their assets, love to display them and are quite amendable to exciting the punters. The accompanying text is practically pornographic.

To be an interested observer whilst these magazines are read and discussed by a range of male age groups is an education.

Perhaps some consideration should be given to this ‘conditioning’ to explain the actions of the Summernats yobs.

And Mr. Evil you are more than welcome to steal any attention that has ended up in my direction.

Dez, if summernats is where the biggest bogans go and get drunk, where do the smallest ones go?

but do they go to summernats?

Based on first-hand stories from friends, going back some time, a notorious ANU date-rapist is the offspring of an upper-class Victorian winegrowing family. Another is the son of a prominent academic. Another Canberra rapist is now a senior doctor at Canberra Hospital. It isn’t a bogan thing.

The summernats wouldnt have being complete without some type of sexual assualt related attack. No matter how fabricated it may end up,
Really, What can you expect when the biggest bogans in Australia all gather and get drunk. And people still seem to be suprised when it happens??

i agree Al that’s exactly what i was gonna say.

I don’t want my taxes spent to encourage the ‘show us yer tits’ mentality either.

If summernats is a gfvot sanctioned and funded event women should feel safe to go there.

and the free speech example made sense to me.

However the “show” us yer tits” mentality is encourage and was reported by the Sunday Times with photos. This should not happen.

God I hate it when an RA discussion disintergrates into a slag-fest between 2/3 people…
What no-one seems to have mentioned, is that this particular female was not – according to the first hand (sorry – second hand) account that was posted here when the story was first published – blameless. She picked a fight, and got a bunch of her male mates to fight it for her, then waded in herself, and got snotted. Sounded like she had it coming – not because she was just an innocent bystander trying to enjoy the event, but because she was a drunk bogan who used mates to pick on an innocent guy, and got caught out when he came back with his mates.
And none of THAT found its way into the CT reporting…

Well Lukergal, I am too busy working to worry what a wannabe fem-nazi who casts stones on one comment cares so I have plenty of character.

You can go and eat a tub of lard and parade your gutless PC values to Ms Love or not for all I care.

I have washed my hands of you and will wear the honor you bestowod upon me with pride given it took one deliberate comment 9reel ’em in boys!) to win said title.

I couldn’t care less about Summernats, and that comment (re me walking naked down the street) had no relevance whatsoever.

My silence was because I was too busy to check back and see if you had “slung another stone”. What you think of me means nothing to me, I would assume if you had any character, my opinion of you would have the same effect.

I think you are a dick, so therefore I am a hypocrite if I don’t get my clothese off? I rest my case.

Dawg I suggested that Lukergal would be a hypocrite if she did not (not you) on the basis that I was:

I guess her silence on the topic and her strongly painting me with a broad brush even when I come to women defence says something.

Wow, I thought the comment was directed to me! Perhaps I should lay off the steriods…

Nope – simply that what should happen and what does are two different things. Whether or not someone is ‘righteous’ seems irrelevant to me.

I don’t have the intention of making myself more righteous.

All I was suggesting is that you act on your own comments before accusing others (such as LurkerGal) of being a hypocrite for not acting on your comments.

You have said that you contacted Chic and John. Good work, however I haven’t. This should not make you better, or me worse.

So you are saying that because I am not doing what you are suggesting and that I have suggested something and have done it but you wont that makes you more righteous?

Illyria Tyers - 58 minutes ago
That's very young ... #RIP.... View
Vanessa Schultz - 8 hours ago
Too young, and always a happy football mad kid, I grew up across the road in Hopetoun Circuit Yarralumla from the McInnes RIP View
Carol Jean - 18 hours ago
So sad, a true gentleman View
News 2

Acton - 2 hours ago
This is not the first time defence personnel have been caught mishandling classified material, but the harsh circumstances of... View
Spiral - 2 hours ago
"“J” has well-grounded fears that he might be targeted by foreign intelligence agencies" That certainly sounds like he ha... View
News 36

Julie Macklin - 3 hours ago
James Dof, I take the train, because I like the train much more than the bus. I can get get up and move around, plus there's... View
James Dof - 16 hours ago
I take the bus to get to the bus terminal with luggage and like I said it's 45 mins to civic and an hour less travel on the b... View
Julie Macklin - 16 hours ago
James Dof A bus every 15 minutes from Civic. In practice thought I imagine most people, even if there is a regular bus from w... View
News 27

rhona1212 - 5 hours ago
I would like to recommend Canberra Blocked Drains Services for not disappointing us. Two plumbers came before them but failed... View
Business 4

Sylvia Brooker - 23 hours ago
Thanks Leong kitchen, you will be missed by many. All the best for the future. View
Property 5

Felicity Copeland - 24 hours ago
Maryanne he remembers! View
show more show less
*Results are based on activity within last 7 days

@The_RiotACT @The_RiotACT
“Witness J” speaks to Genevieve Jacobs about being incarcerated with Canberra’s sex offenders, his anger and his fears about our nation’s growing secrecy https://t.co/0X7XNZbVN4 (3 hours ago)

@The_RiotACT @The_RiotACT
The Raiders marked Josh Papalii's 200th game with the Green Machine with a 22-6 win over the Storm in Melbourne. It's the Raider's best season start in 15 years and already has fans dreaming that Ricky's men can go one better in 2020 https://t.co/v64nqFaA2Q (5 hours ago)