These Bootlegs Are Made For Walkin’ 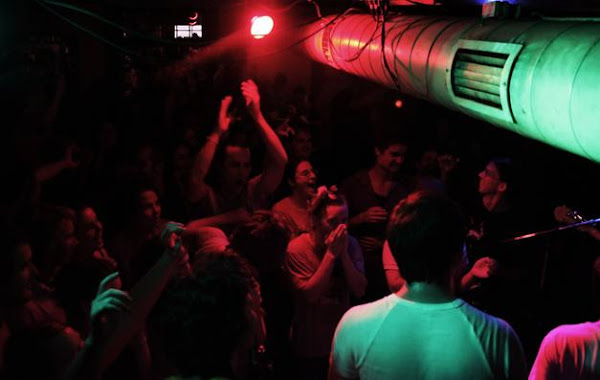 This Monday will see the final Bootlegs Session as produced by Cardboard Charlie. For many of you this will mean absolutely nothing, but for those in the know, you’ll understand the sorrow that this brings.

Let me try to explain the significance of the situation for those too scared (or disgusted) to venture into the Phoenix.

The Bootleg Sessions (held at the Phoenix Pub every Monday night) have been running for about 8 years. 7 of those years were under the direction of Ben Drysdale, the founder of local music business, Cardboard Charlie.

It’s a music night which features 5 musical acts from 8-12pm. Bands are introduced by an MC who makes everybody clap and then makes everybody put money into a chamber pot to pay the musos. Maybe a simple premise, but one which grew to be Canberra’s biggest regular local music gig.

During its 7 years there were 1512 sets performed by over 400 bands, made up of over 1000 musicians, and an estimated $67,000 of donations contributed by punters to the musicians.

They’re impressive numbers, but what’s more impressive is the community which this night produced, the assurance that you’d enjoy the evening surrounded by familiar faces, and feel completely comfortable all the while.

The Phoenix, in my drunk and humble opinion, is the only bar that comes close to replicating Springfield’s Moe’s, or Quahog’s Drunken Clam. It’s a pub that that doesn’t give a shit. A pub where you can get too drunk and argue with strangers about things you know nothing about. It’s as comfortable as your lounge room but better because there are people to pick up after you. Sure it smells funky* and everyone looks like they’ve just stepped out of a Terry Pratchett novel, but it’s safe, friendly and a home for those who like their music live and original.

The Bootlegs turned the Pheno from a living-room into a home for musicians and music-lovers alike.

“It’s been an amazing 7 year journey and we’ve seen so many musicians grow into their musical boots (no excuse for the pun). Massive thanks to all the musicians who played over the years, all of you who came out every Monday, and of course, The Phoenix, for helping Cardboard Charlie support original music and developing artists at the Bootleg Sessions.“

Ben and Cardboard Charlie will continue to help independent musicians further their careers. Things in pipeline involve working with a group of other promoters to start a new venue, starting a music publishing house and expanding the online CD shop.

The Bootlegs will continue! They’ll be presented by a different group each week and I’m confident they’ll maintain the community which has been built, and encourage more people to check out what’s going on in the local scene.

Cardboard Charlie present its last Bootlegs this coming Monday the 25th of July. A showcase of some of the musical MCs – the people who have forced everyone to clap and throw money into the pot, featuring Nick Delatovic, Bryony Wills, Rafe Morris, Jacinta (aka Adam Hadley), Cherie Kotek, and Beth n Ben

*They burn a lot more incense now and I think they’re using a different toilet cleaning product because it smells a lot less like piss these days. Don’t worry, just because it doesn’t smell like piss anymore doesn’t mean that it’s any less charming.

Fiete is taking some bookings, I believe.

I’m not sure about the idea of having presented by a different group each week but ! wouldn’t shoot it in the foot just yet. Wait and see. You may be surprised.

Does anyone know who’s now taking bookings for the Bootlegs? Is Fiete handling that too?

Sad day that it’s finishing up and i’m not really confident that the new set up will be able to replicate the effort Ben put into the Bootlegs.

Graeme Jeffries - 25 seconds ago
Footpaths are for pedestrians. View
Josh O'connell - 5 minutes ago
Brendon Anderson skin tight onesies 🙄 View
Michael Norman - 20 minutes ago
Would a non-divisive approach to problem solving serve communities to move forward? The problem is around infrastructure that... View
Lifestyle 27

Geoff N Narelle - 34 seconds ago
I think that the author of the article has romanticised the story somewhat. It was probably a 20 minute bike ride each way on... View
Food & Wine 3

Ivana Ryan - 37 minutes ago
Toasted sandwich and a coffee 😋 Bojana Simic View
Christopher Rompotis - 2 hours ago
Hannah next brunch catch up? 🤔 View
Nicolas Normandeau - 10 hours ago
Matilda Jones I need this in my life. This sounds so good!... View
News 21

chewy14 - 41 minutes ago
Capital Retro, You're partially correct but not in the way you think. The SA battery has been so successful simply because th... View
David Wagner - 49 minutes ago
I like it, but why not look at biogas using sewage plants eg. Europe or Stirling engines or ........ View
Capital Retro - 11 hours ago
You know what windfall means? Take that away and the venture has probably lost money. Gas peakers all over Australia would ha... View
News 1

HiddenDragon - 15 hours ago
Why stop with repatriation flights? The logical conclusion to the economies of scale argument (which is equally relevant to j... View
Capital Retro - 17 hours ago
Forget the "the significant costs and operational requirements associated with the program." being the reasons. The risk is u... View
Sport 4