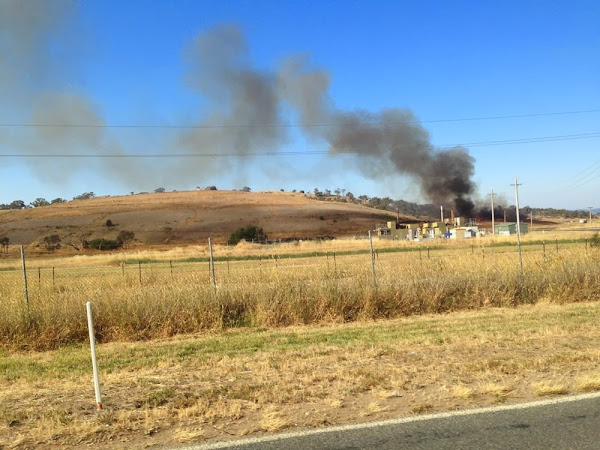 Firefighters are working to extinguish a rubbish fire at the Mugga Lane Resource Management Facility.

Twelve tankers are on scene with a commander.

Crews are cutting a path to the fire which is estimated to be about 100m x 50m.

It has been contained to the rubbish pile.

Seventeen tankers are now at the site.

Units are halfway through extinguishing the fire.

Two machines are digging up rubbish which is being watered down by ACT Fire & Rescue crews with support from the ACT Rural Fire Service.

The fire is under control and tip managers will conduct night patrols of the area.

It is expected smoke over the Tuggeranong area will soon clear.

[Courtesy ESA, thanks to Digga for the photo and video!]

Rauny Worm - 4 hours ago
Tom Porter ..there is a youth specific faculty but only for emergency treatment not for therapy. There are still so many gaps... View
News 6

Jacqui Donegan - 5 hours ago
Cooleman Court could (again) be a wonderful local precinct ... but it’s a mess - no parking, scrappy streetscaping, and a s... View
Angela Davey - 7 hours ago
Why not open shops in Coombs. Wright Denman Prospect before building more car parks. View
News 9

Conrado Pengilley - 5 hours ago
And how big is your risk fund on your investment property? View
Ashley Latimer - 17 hours ago
Imagine investing in property and not having a risk fund set up lmao View
Community 1

Chris Kubank - 8 hours ago
Lauren Ogden well said View
Randy Goldberg - 14 hours ago
Domenic Fabbo three to six months or more. Basically, it'll be in place (if not stronger measures) until there is a working v... View
Lauren Ogden - 16 hours ago
It is a shame that these stories are provoking aggressive reactions when we could be working together as a community. "One st... View
News 18

Karen Feng - 20 hours ago
If the kid is 12 and below. you can entertain them (keep them out of trouble) with art, jewellery making, balloon arts, fort... View
News 25

Mark Valerius - 20 hours ago
Woden isn’t empty of APS. Plenty still work there. View
Craig Elliott - 21 hours ago
We can't afford this at this time....put it on ice. The Government has just spent how many millions which we don't have View
Jesse Mahoney - 22 hours ago
His solution doesn't sound better because he has no understanding of community planning. View
Opinion 20

Stephen Mee - 22 hours ago
Peter Norton reskill. Will not be enough jobs in that sector due to oversupply and no call. View
Business 1

Maria DeAngelis - 23 hours ago
Lisa Lamah, might be handy info to share with your barista downstairs? View
show more show less
*Results are based on activity within last 7 days

The ACT Government has announced a $126 million boost to health services to help fight the COVID-19 virus, as the...
News 18

UPDATED 4:00 pm, 31 March: ACT Health has announced three new ACT cases of COVID-19 in the past 24 hours,...
*Results are based on activity within last 7 days

@The_RiotACT @The_RiotACT
The ACT has recorded its second COVID-19 death and there have been further confirmed diagnoses in the past 24 hours. The man's death was announced this afternoon as the number of Canberrans hospitalised with the virus continue to rise https://t.co/jTLdAG5WoH (46 minutes ago)

@The_RiotACT @The_RiotACT
With Super Rugby & Super W suspended, it's a chance to get to know the players a little better, kicking off with #Brumbies captain Allan Alaalatoa https://t.co/HKCMFCRSiQ (1 hour ago)

@The_RiotACT @The_RiotACT
Canberrans are finding new ways to commemorate Anzac Day this year, from a locally-produced podcast featuring Redgum’s classic I Was Only 19 to the #AnzacAtHome campaign https://t.co/cDx372L1xS (2 hours ago)