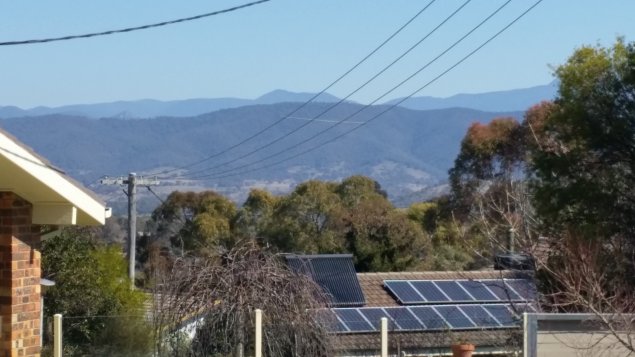 On the 4th of May last year I commented on the Seselja proposal to expand across the Murrumbidgee River to expand the Tuggeranong Valley by building a heap of new homes. I am dead against it for the time being and said so then and haven’t changed my view. The post attracted about 1600 views and 33 comments. Clearly a live issue.

Since then, the good news is that the Territory has greater sovereignty over its land than it did with powers surrendered by the NCA. Good news indeed, given our history of trying to rebuild after the 2003 bushfires.

Fast forward to this week and we see the ACT Government putting a proposal out there for consultation around the possibility of building a new suburb, Thompson, on the western side of Athllon Drive behind the public service offices, past the Vikings club and behind the Greenway Oval, hockey fields and Archery Club.

This issue must be put into perspective and again, the good news is there as is the bad news.

The good news is that the Government is talking to the Tuggeranong community in the contemplative stage. This is good policy. It is rare that the bureaucracy honestly consults with affected parties before the real decision is taken.

In my experience in living in this town for 48 years, the norm is that a decision is taken, consultation is conducted, usually with the view of convincing the public of the wisdom of the decision, and then proceeding with a slightly amended plan. This amendment is usually minor and was predicted by the planners before the consultation was done. You give something up to achieve the real desired outcome.

The process employed this time is not of that ilk. Proof of the contemplative nature of the proposal is that, sure the shape of the proposed suburb has been outlined, showing that the planners have been doing some thinking on the matter, but it is important to know that the community found out about the issue before the NCA.

When the additional powers transferred from the NCA to the Territory, some were held back. Notable among those held back powers was the authority over the Murrumbidgee River and the Murrumbidgee River Corridor. There needs to be a change to the National Capital Plan if any incursion into the Corridor is to happen and this must be pursued by the NCA. So, they have the power of veto over this proposal. And… the NCA read it in the paper!

So a done deal it ain’t!

So a big congrats to Mick Gentleman for bringing on the consultation.

Now for the bad news. It seems as though the only people to welcome the proposal is the Housing Industry Association. Now there’s a surprise!

It seems as though the Tuggeranong Community Council, that representative forum of folks elected to advise Government on matters Tuggeranong, by at least 30 people from the nearly 100,000 of us, is a bit supportive subject to environmental concerns being addressed.

The Conservation Council is concerned about the potential reduction in the nature reserve and of course the Greens don’t want any more development anyway.

It is interesting to note that for people in the know, this proposal was not welcomed the last time. I can recall the furore in 1997/98 when the idea was to span the river, there was huge outcry about the effect of an increased population living so close to the river, on the river itself, its corridor and the animals living in the corridor.

As an aside, I had to live in the motel on the edge of the corridor for a week when I was doing renovations at home and each morning and evening, a mob of kangaroos came to the carpark to munch on the grass verges. Cute as! They will disappear!

When I was helping the Archery Club get their clubhouse up and running with its associated archery range, there was concern that the arrows would hit wandering wildlife, such was the number of wildlife species prevalent in that area of the corridor. This housing proposal builds on that habitat.

It is often said that more housing brings more economic activity. It is said that having more people living near the Town Centre will help the economics of that area but, and this is a big but, there is a fallacy in this argument.

Tuggeranong is a set of dormitory suburbs and people work outside the Valley. They don’t shop much, access services much in the Valley because they do this closer to their workplace.

A better approach to viability in the Valley would be to provide incentives for the private sector to conduct business there so that Tuggeranong could have a vibrant private sector business area like Phillip, Belconnen, and the City.

Is this housing proposal a good idea? I don’t think so. I think it misses the point. Stimulus is not created by increasing the very reason why vibrancy is absent. People need a better reason to live in the Valley other than that it has the most beautiful views and you can live right next door to a river!

My other concern is that we haven’t learnt the lessons of the Molonglo Valley yet. Here they have built right up onto the reserves bordering the Molonglo River and it has brought destruction of native habitat and perhaps a threat to the quality of the river itself, with its resultant destruction of water habitat. Perhaps we should wait until that jury is in?

I congratulate the Government for putting the idea out there and getting feedback in the contemplative stage. If the concerns and comments are honestly taken on board, it will mean that Tuggeranong is indeed on the Government’s radar and is not forgotten as some would suggest.

Whether it is consultation in the contemplative stage or the brain snap stage will remain to be seen.

chewy14 - 1 hour ago
Jorie, Why would I imagine such a thing when it isn't close to reality? As I've said above, the vast majority of people aren'... View
jorie1 - 2 hours ago
Assume there are 300 rental properties in Canberra. And 3000 people looking for a rental property in Canberra (these Canberra... View
Ophellia Knobbs - 2 hours ago
Banning short term/Airbnb in certain areas like Civic & surrounding suburbs would. View
Lifestyle 1

Finagen_Freeman - 1 hour ago
If we have to pay at the Hospitals then we sure as hell should pay at a sporting / recreational venue. Oh, we don’t pay at... View
purplevh - 2 hours ago
Being a place that helps maintain a level of fitness in its users it's cost is most likely offset by the health benefits and... View
purplevh - 2 hours ago
Paid parking out there? Can't the ACT government come up with better ways to raise revenue other than constantly slugging the... View
Opinion 267

Will this help solve the Molonglo traffic puzzle?

@the_riotact @The_RiotACT
With more and more families and low-income earners being squeezed out of Canberra's rental market, Community Housing is providing solutions. @APW_ACT highlights the number of ordinary Canberrans facing rental stress and the need for more affordable housing https://t.co/xSlGC5HKMZ (36 minutes ago)