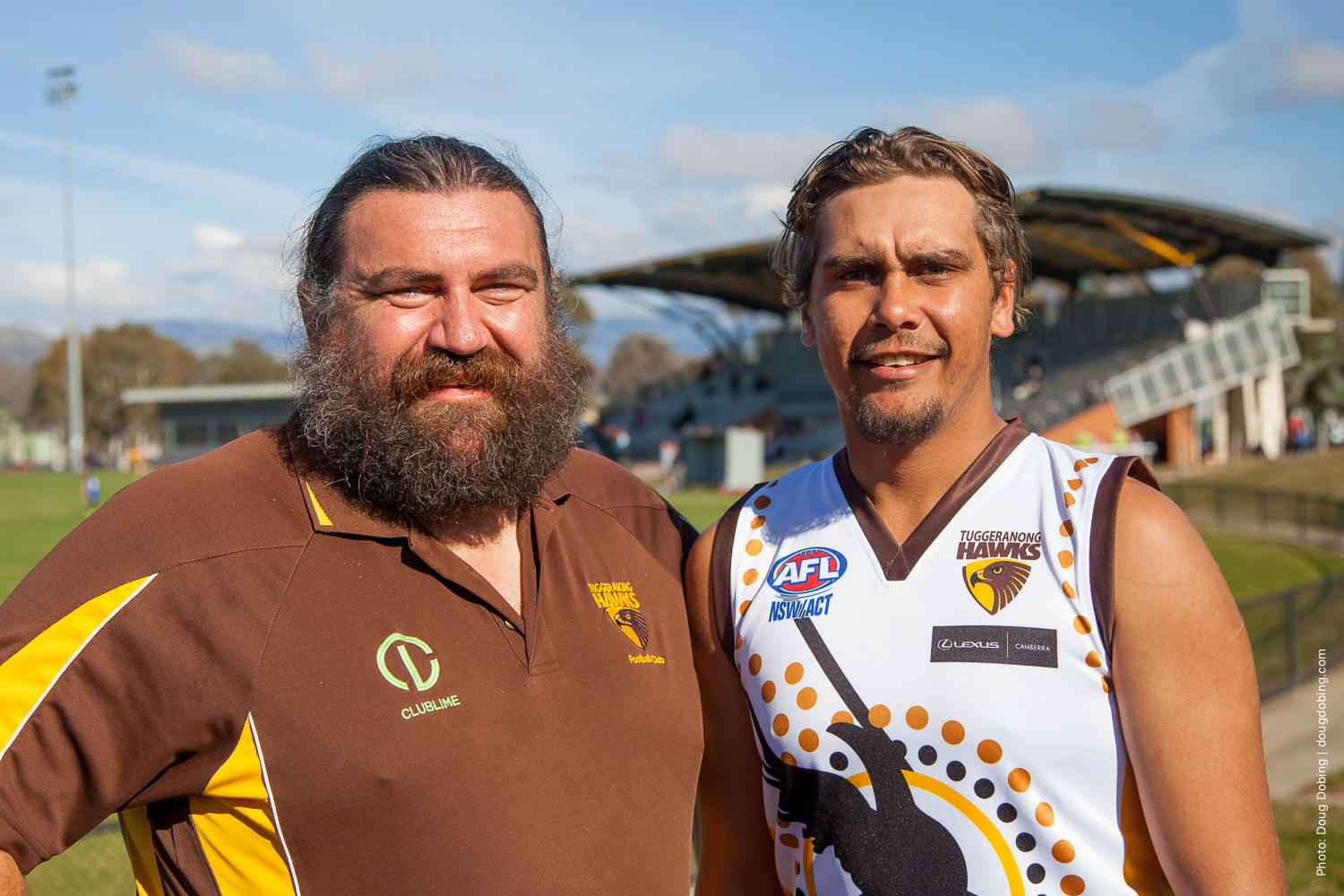 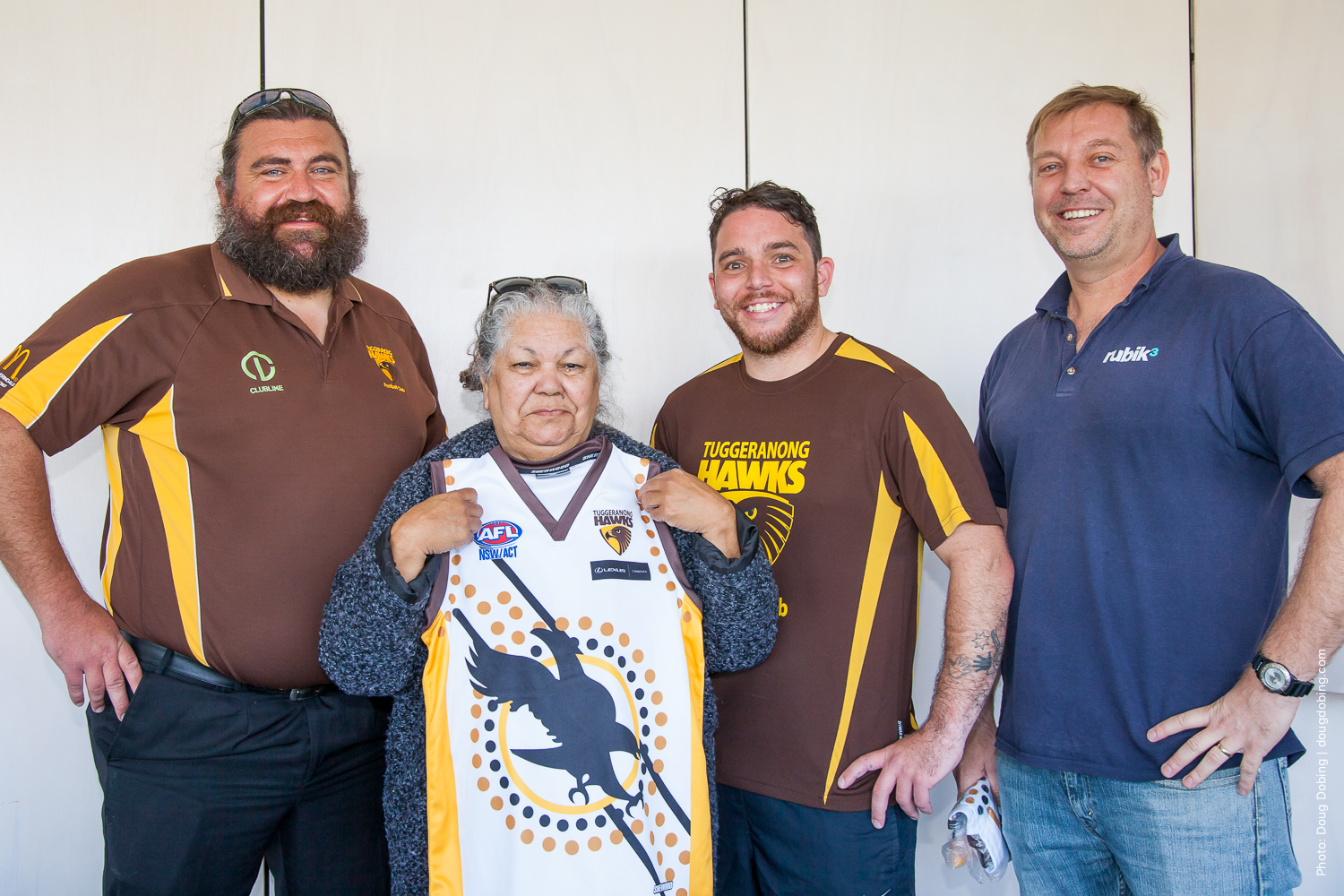 “We’ ve been lucky enough to have a sponsor to come on board, allowing us to play in an indigenous jumper for the day,” said the ‘Chief’.

“That jumper was designed by Tom Hodge. We’re not only proud to show off his talents but to play a part in [the] indigenous round,” he said.

Tuggeranong Hawks Reserve grade player Tom Hodge said it was an absolute honour to design the Guernsey and see his mates running around in it. 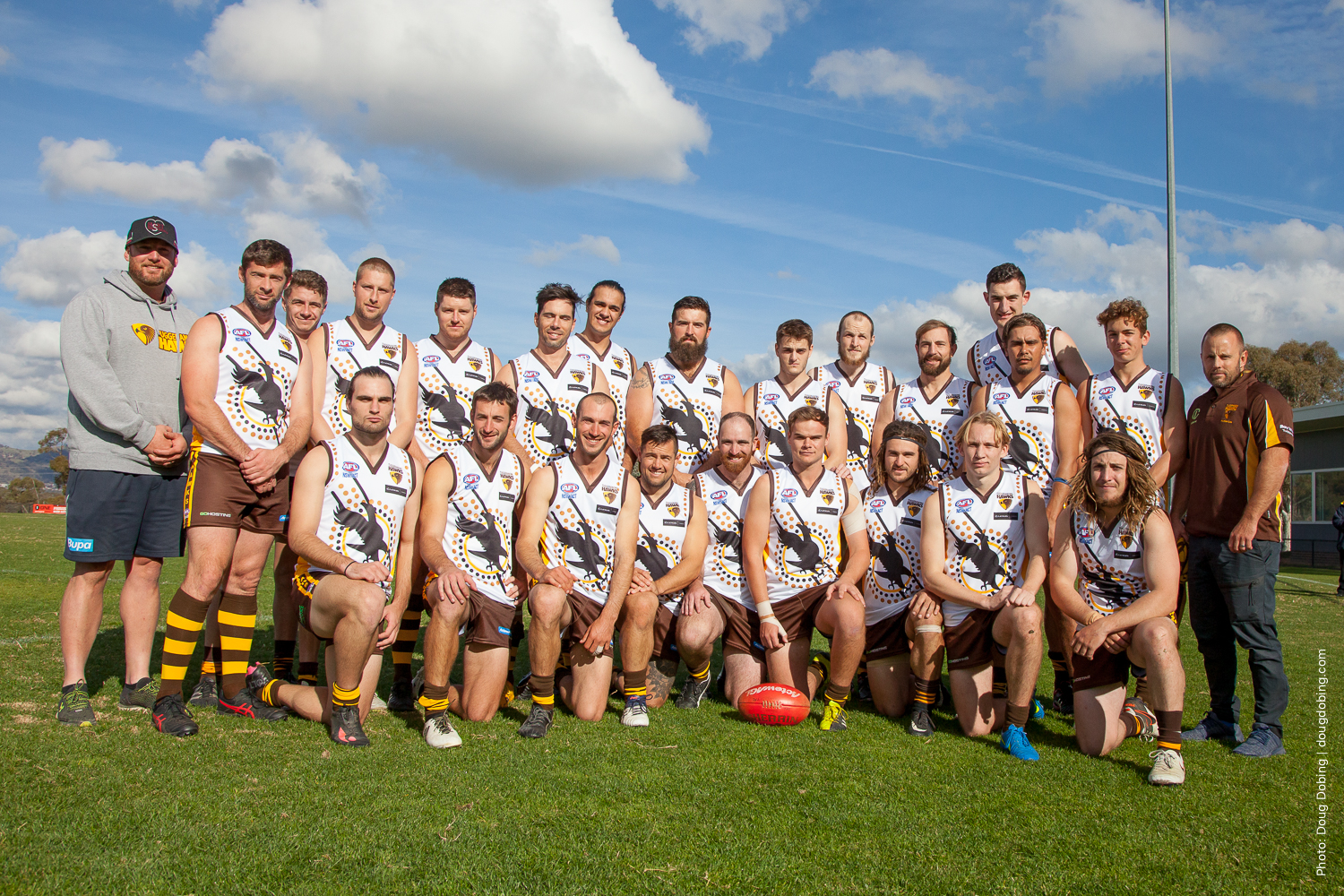 “On the front we have the hawk, being our totem, then a meeting place behind the hawk, Greenway[Oval], which is our home ground,” said Hodge.

“On the back, we have two different water holes which signify our junior teams and our senior teams and the pathways between them,” he said. 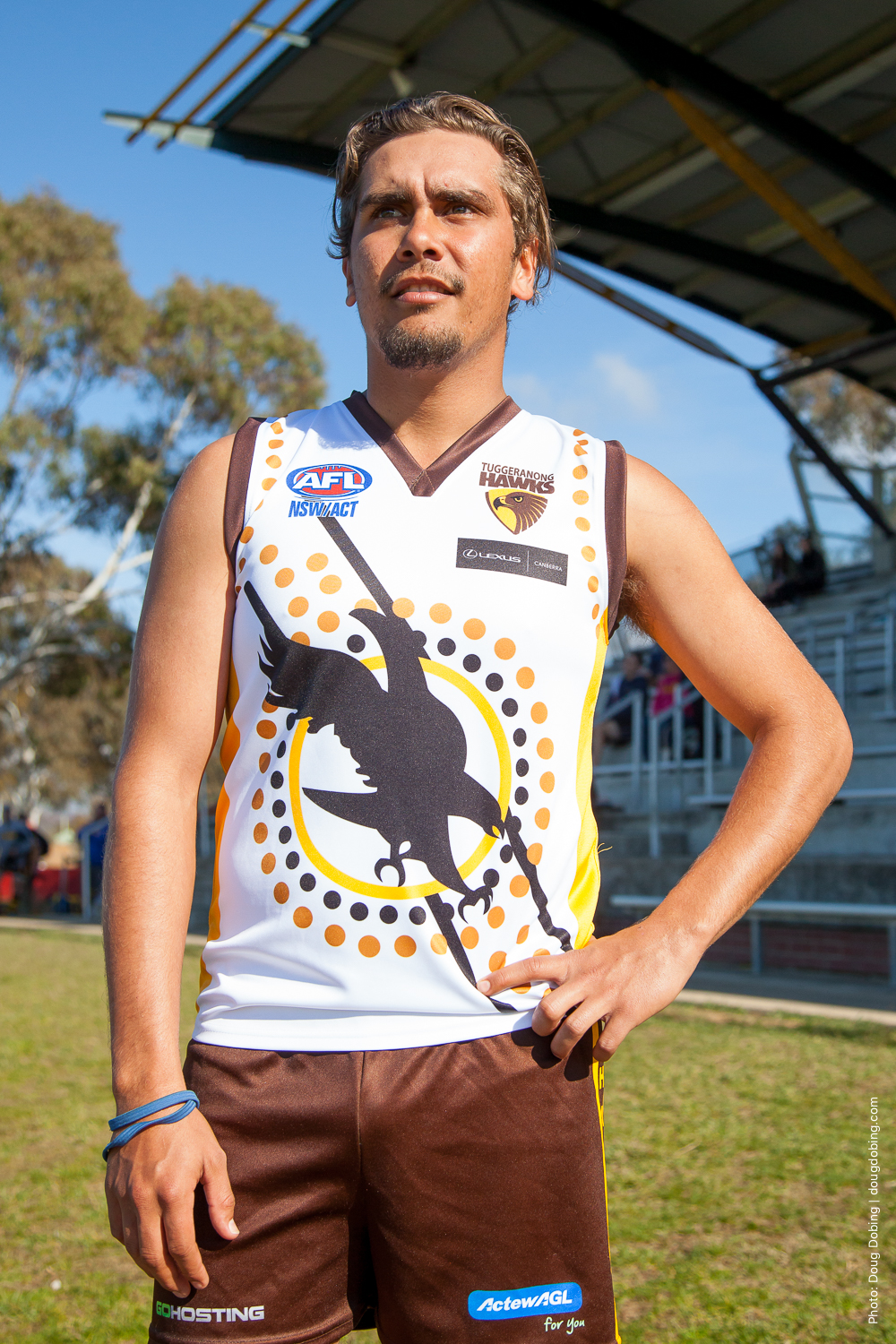 Northern Territory AFL player Ike Ryan has recently moved to Canberra to play with the Tuggeranong Hawks AFL club. He said this is the first time he has played AFL in a specially designed AFL Guernsey.

“My mum and family are pretty proud of it. So it means a fair bit to me,” said Ryan.

Talking about Indigenous Round, Wanganeen said: “We have a long and proud history with indigenous players at the club and this is a fantastic way to recognise it.”

“We are lucky enough to live and work and play our footy, here on Ngunnawal country,” said Wanganeen.

“So for us, it’s a fantastic opportunity to acknowledge those people, the traditional custodians,” he said. 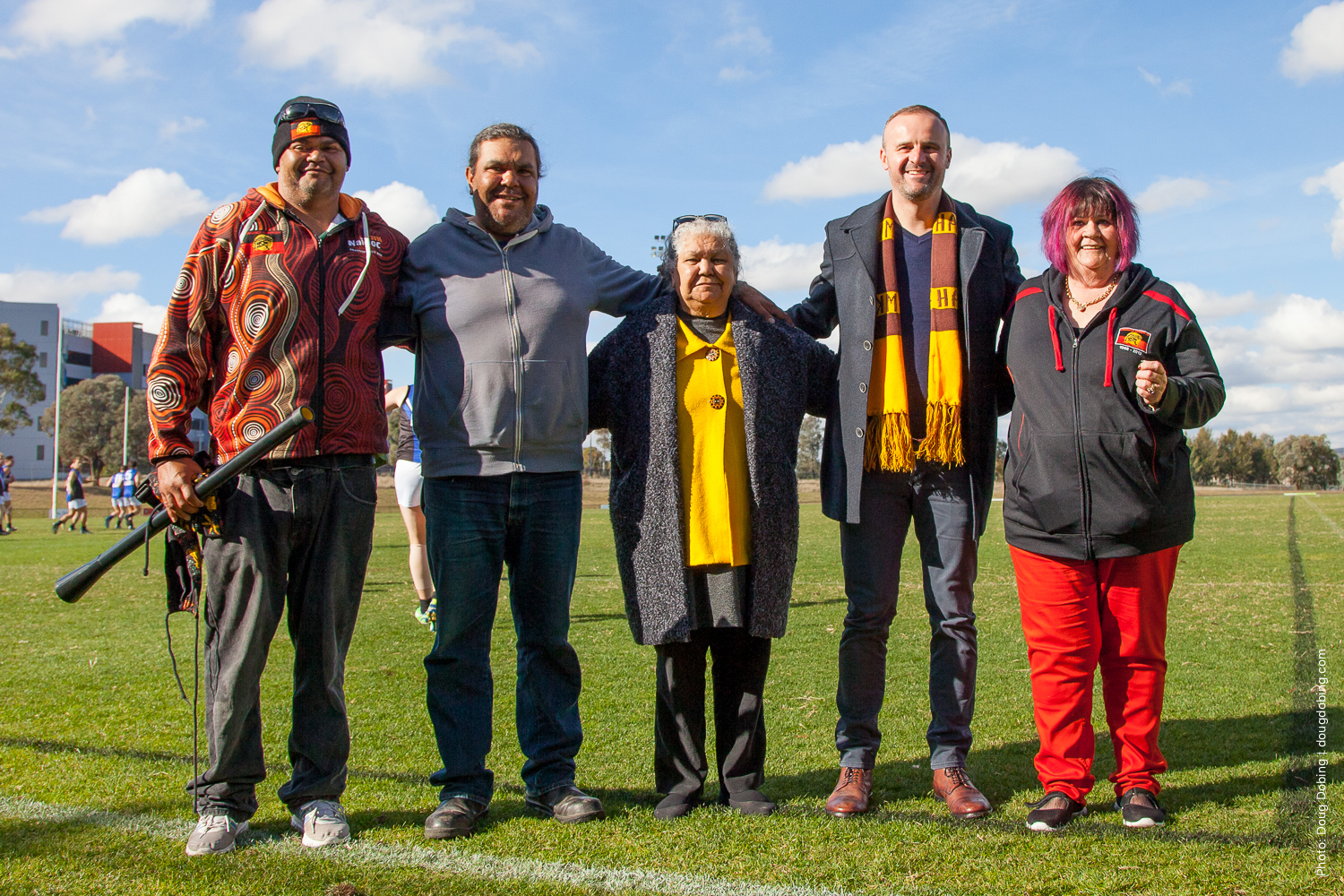 Traditionally the smoking ceremony is to cleanse the soul, to ward away bad spirits and to bring in the good spirits, said Wanganeen.

“I pay my respects to my past and our present and to our future to keep it going. And we will. Because we are a very, very strong people,” said Aunty Louise.

“I especially acknowledge the campaigners of the 1967 [Constitutional] Referendum for I am a product of your efforts,” she said. 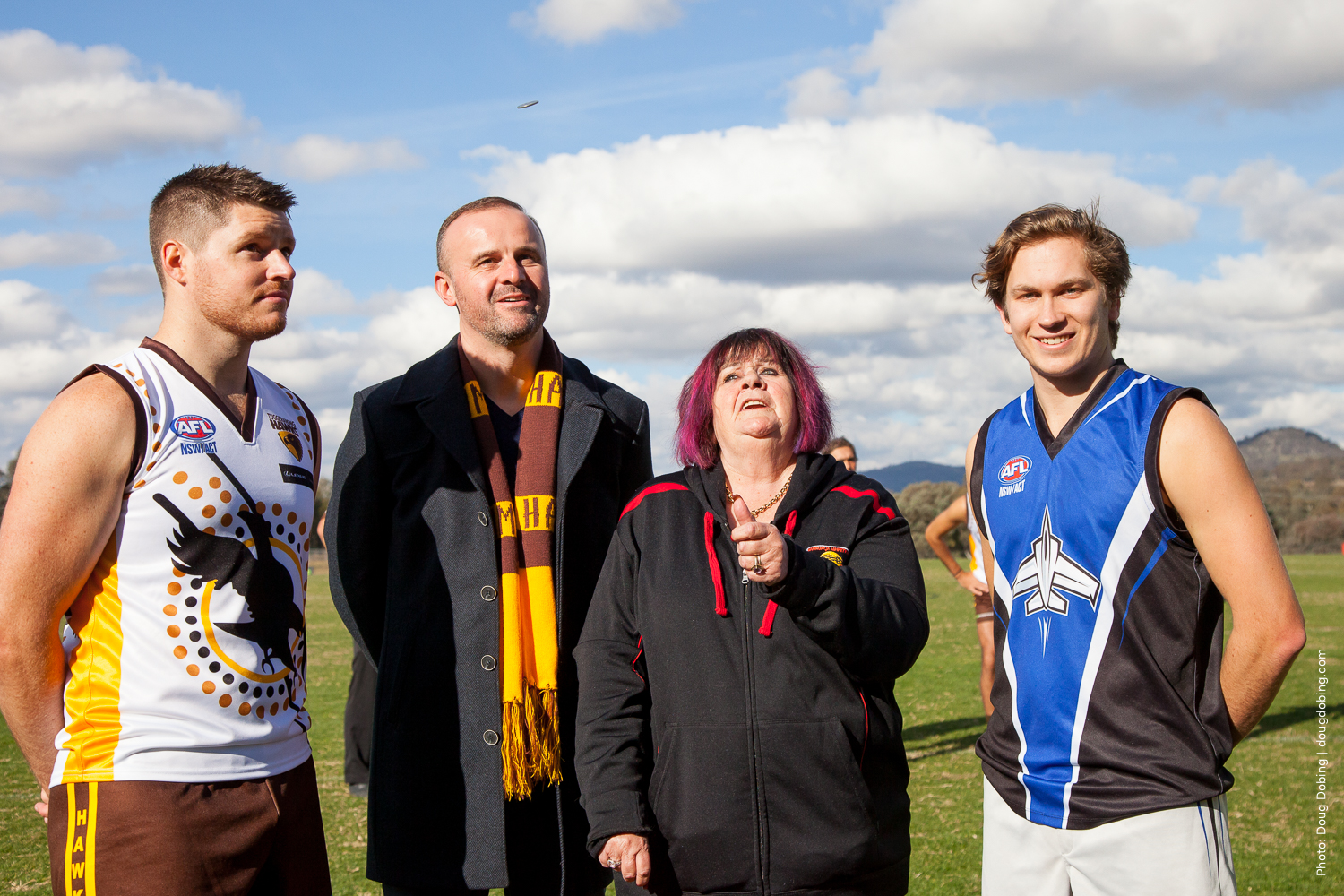 Chief Minister Barr said; “[The AFL] is Australia’s indigenous game, it has played a great role in working with indigenous communities right across the country.”

“To capture emerging talent and fantastic athletes. But also played an important role in bridging cultural divides and standing up to racism.”

“We’ve seen that quite significantly play out in the last few decades through a very clear policy of inclusion.”

“The AFL would be one of the Nation’s leading sporting codes in this respect.”

‘Chief’ Wanganeen said The 2017 Sir Doug Nicholls Round and Reconciliation Week is an opportunity to recognise and celebrate major historic indigenous events, including the 50th Anniversary of 1967 Constitutional Referendum and the 25th Anniversary of the High Court Mabo Decision.

“It’s 20 years since the ‘Bringing them home’ report, which was about the stolen generation,” he said

“The 3 June is obviously the anniversary of the Mabo decision in the High Court.”

“It’s a real privilege to be part of being able to design the jerseys,” said Mr Devow.

“[I feel] overwhelmed, no words to describe. I’ve designed clothing that’s been worn by people all the country and different organisations,” he said.

“The Governor General has a tie and his wife has a scarf that I designed. But this is the one that is the most closest to my heart and the one I’m most proud of.”

“Because it’s about my son and about being a part of [the] Marist community and sharing our culture with his peers and our local community here in Canberra.”

“We should be proud of the fact that Australia is home to the oldest living culture in the world. And that needs to be celebrated.”

What AFL Indigenous Round or Reconciliation Week activities do you plan to go to?

Adele Lewin - 12 minutes ago
Malcolm Campbell "get over it"? You really have little or no understanding to make a comment like that! View
Ray Young - 54 minutes ago
Nb: I won't address the fauna question as that is a divisive situation. It is like many mistakes of the past, eg: white Austr... View
Lynne Staunton - 1 hour ago
Ray Young all sides are trying to rewrite history. And the fauna story has been around and been told for years. Usually by pe... View
Opinion 47

Il Padrone - 13 minutes ago
Mark Katalinic just keep your car on the freeways that we have all paid $$billions for you to use 👍 View
Mark Katalinic - 17 minutes ago
It's not unreasonable to question why people are riding 20km down a road when there is a path that goes the same way View
Il Padrone - 23 minutes ago
That destination is still not something that you can know. There are many reasons why a person would choose to use the road i... View
Food & Wine 31

Robyne Mitchell - 4 hours ago
What about the people who lost their livelihoods and houses as a result of this fire? View
Louise Flood - 4 hours ago
Robyne Mitchell and the Blue Mountains fire that started with in Lithgow View
Martin Budden - 4 hours ago
Phill Wall when you realise you've made a mistake the first thing to do is own up to it, then you can fix your procedures to... View
Community 2

Andrea Mya Riboust - 6 hours ago
Jamie Angela our large noisy friends from up north, must have just been a particularly busy couple weeks for them 😄 I thin... View
show more show less
*Results are based on activity within last 7 days

It's the week before the national holiday that causes division across the country, so it wouldn't be right for me...
Opinion 47

Whenever a story about cycling appears, it activates an avalanche of pent up angst from the wider community. Predominantly it’s...
Property 40

@The_RiotACT @The_RiotACT
A dragway gets the thumbs up from many of you. And on road matters, this week's poll asks if cyclists get a fair go on Canberra's roads? https://t.co/EC199gbmZv (2 hours ago)