Chief Minister Katy Gallagher has been talking a big game on transparency.

But when it comes to letting the public see what she’s sending out to her tame media it seems we have a different story.

Over on the Chief Minister’s media room it’s been two weeks since she’s added anything. All the other Minister’s have had something to say and when it came to acting for Simon Corbell a media release was definitely produced, but not published to the web.

Yes, there have been a lot of radio interviews, but no transcripts published.

Here’s a screenshot in case anything happens to that page: 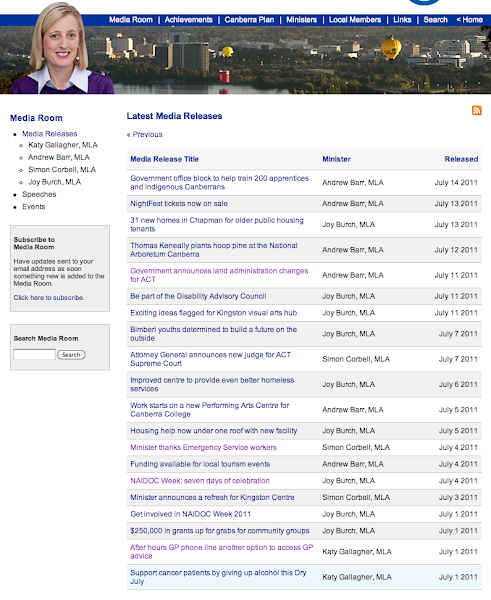 Funny that this post has appeared. i was thinking about this the other day. Theres too many news items in the local media, all similarly worded – so obviously they are taking the text from a media release (journos being fairly umm lazy). I suspect that an email list with favoured/ reliable journos has been used and ministerial ‘releases’ sent out in that way.

Often i prefer to read the actual media release than the journo filtered version. Its annoying that they are bypassing this basic tool of accountability.

To be fair, it’s not like IntACT could even keep up with the change of CM.

But in reality, there’s probably been a stck of non-public media releases – ie given out to only a few favourites as JB said. In case it’s Katy’s fault, here’s what a google showed up. Some of them must have been backed by press releases:
ACT Cabinet goes digital / ACT cabinet switches on to iPad’s benefits?
Swamped solar scheme shuts
?More needs to be done to fix courts: Gallagher
?Child-care decision angers Flynn group
?Chief Minister Katy Gallagher yesterday unveiled new transparency measures that she said would make the ACT cabinet the most open in …
Gallagher opens up Cabinet to scrutiny
ACT to baulk at Majura Parkway tolls
?Majura Parkway ‘should be tollway’? ABC Online
Carbon tax to help ambitious ACT target
?ACT’s high earners won’t get same as the rest? The Canberra Times
Infrastructure plan ‘offers long term certainty’?

Kathy Tozer - 1 hour ago
We have been seeing them around Canberra in the last couple of months. View
Ellen Maree - 3 hours ago
Helen Crane we saw one today!! View
Kath Sheppard - 3 hours ago
Seen one last week in neighbours yard View
Opinion 1

facebook_user - 1 hour ago
Excellent article Hon Deepak-Raj Gupta. You are spot on regarding the Pandemic COVID19 and themself reliance required by Canb... View
Opinion 1

watto23 - 3 hours ago
So why can't the liberals provide a solution to this problem. They are very good at pointing out everything Labor does wrong,... View
Property 6

Jeremy Calero - 4 hours ago
Kaitlyn nothing will stop it lol View
O L - 5 hours ago
Wonder what that means for rental longer term? Probably go up after covid to match increase in housing values View
Rodney Weber - 8 hours ago
Shiva Sapkota A lot of the older areas also have many poor quality houses. Cheap materials :-( View
Community 12

O L - 5 hours ago
HECS gets paid only when you earn enough money to pay it back. What’s the problem with that? Fair system and I had no issue... View
News 6

O L - 5 hours ago
Great, that means little to no federal funding coming our way View
Annie Mills - 6 hours ago
Ben Winkler I have a sneaking suspicion that people in the bushfire affected areas are so desperate for the help they have be... View
Craig Griffiths - 7 hours ago
I've become convinced over the years that tabloid media have a psychological code in the messages they put out during electio... View
Property 10

Martin Dallen - 10 hours ago
Lauren Du Fall this is the place we could see across the inlet from air bnb. View
Nora Preston - 15 hours ago
Didn’t Rudd buy that? View
show more show less
*Results are based on activity within last 7 days