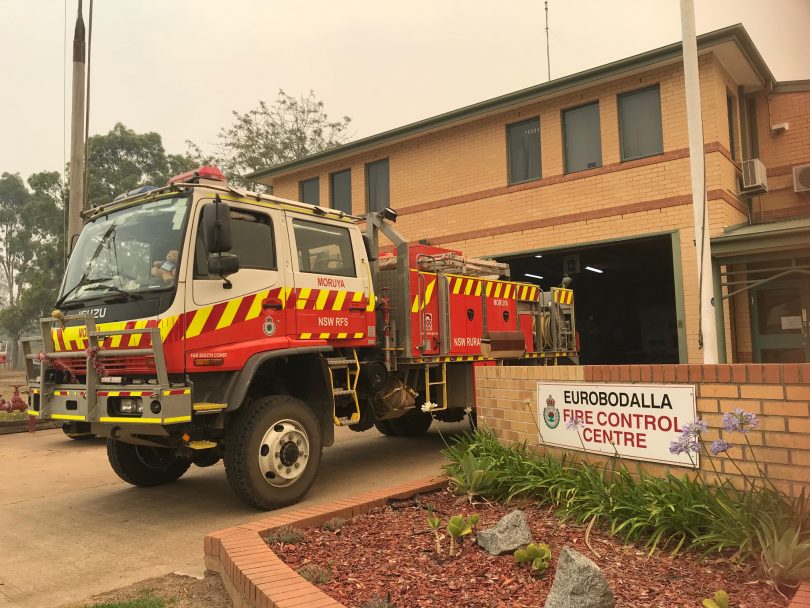 Eurobodalla fire resources are being readied for severe conditions over the next two days. Photo: Alex Rea

Summer tourists in popular South Coast visitor destinations have been told in no uncertain terms to leave the Eurobodalla now if they are planning to go as fire risks heighten over the next two days.

The warning extends to people in South Durras, Batemans Bay, Broulee, Moruya, Tuross Head, Narooma and Tilba, all popular destinations for Canberrans and regional visitors who may also have holiday homes in the area.

NSW Rural Fire Services warned today that there is significant potential for fires on the Far South Coast to impact people’s travel plans tomorrow and over coming days in all those areas as they brace for significant adverse weather conditions.

They say that visitors who choose to remain may not be able to leave until fire-impacted areas can be made safe. If you need to leave, leaving now is the safest option. All travel plans should be reconsidered in light of the risk.

Similar warnings for the Shoalhaven were issued two days ago when emergency operations controller Ray Stynes and incident controller Superintendent Mark Williams asked visitors to stay away if possible due to intense pressure on local resources.

Access to the coast from Canberra has been cut for weeks as the Kings Highway remains shut from Braidwood as fires rage across the Clyde. Visitors have been forced to travel over Brown Mountain to Bega or down the coast via Kangaroo Valley. But as the Currowan fire edges north towards the Southern Highlands, those routes are also coming under threat.

Crews are currently attempting to control the north and northeastern fronts of the Currowan fire but the RFS says there is “every likelihood” that the fire could cross the Shoalhaven River. In a worst-case scenario, it could reach the village of Kangaroo Valley, although not immediately.

The RFS says that anyone who intends to stay on the South Coast should have a bushfire survival plan ready to enact. Visitors should not enter bushland areas.

Check Live Traffic and Fires Near Me prior to departure, and regularly during your journey. Drive with your car headlights on at all times so you can be seen, and travel with extra food and water.

Stay up to date with the latest RFS information via Fires Near Me, call 1800 679 737 or listen to ABC Southeast radio or 2EC/PowerFM.

Stay safe Julia and the family

Our house is burning - Greta Thunberg- seems she is right :-( hope this is not too close a call for you all.

Are you and craig OK.

If you are in danger... go to the beach, with your towels!

Tommy Whittle you seen this bro

We’re stuck here 😩... we only found out tonight that all roads to Canberra are closed & Princess Highway is going to close in the morning... we have no way to get out & they’re telling us to start getting ready for ember attacks tomorrow. Can’t believe it’s gotten to this !!

Jad Vidovic stay safe! Thinking of you all, must be scary x

Kate Stuart are you guys at Broulee? Stay safe!

Jordan Bromhead thanks Jordan. Have prepped. Can feel the heat of the fire this morning.

the road is closed in both directions

Aaron Jen did you see this?

Marie what r u guys going to do? Daniel?

Alena Sarri we are ok but can't leave as roads closed. The place is eerye there is a black sky all day and night and red sun

There is ash and black burnt gum leaves falling from the sky like snow.

Anna Uren Virginia Buring did you see this?

Philippa Kim we are seeing so much it is hard to know how to respond. We can't get home and it is so calm here at the moment and has been all day.

Virginia Buring Imy, Pete and family are at our house. I’ll tell them you’re there too. I am supposed to come down tomorrow from Mollymook if the road is still open. Might see you then. All the power is off here . Still off in Durras?

Peter Nicholas we are on watch , packed ready to go to beach .

Milly Brent stay safe if you’re still down the coast!

Zoe Winston-Gregson thanks, I have left but fam are all still there :(

Yes we saw! Hayley packed up and left within an hour

Paula Thomas and the rest of you?

Sara Norgate Is this you?

Julie Waters Voutos, I guess you've seen and heard all about this. Please everyone - stay safe

May Agnew - 56 minutes ago
I am being blocked from SHARING my above comment -not allowed to speak the truth these days --WHAT NEXT ?? View
May Agnew - 58 minutes ago
Turning the beauty of Canberra into a concrete jungle now and to think that so many hard workers who built this beautiful cit... View
Jamie Peterson - 4 hours ago
This article is the same as a puff piece for Andrew Barr 😂😂😂😂😂😂😂😂😂😂😂😂😂😂😂😂😂... View
Lifestyle 65