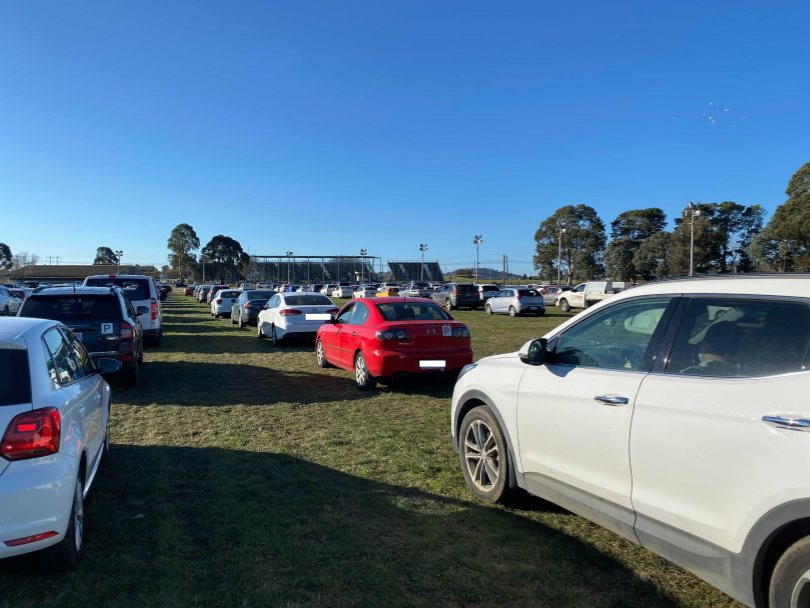 Long queues at the EPIC testing centre were experienced over the weekend as exposure sites continued to grow. Photo: Region Media.

To keep up with the massive demand for testing and vaccination, many staff from across ACT Health have volunteered to transfer from their usual duties to the COVID-19 response team.

Now nearing the end of the first week of lockdown, significant changes have already occurred across Health to expand testing sites and services.

Most notably, the Inner North Walk-in Centre in Dickson closed on Monday (16 August) so staff could be redeployed across testing centres.

Extra staffing was expected to ease the burden on nurses and health staff at EPIC, Brindabella Business Park and the Weston Creek facilities given record testing numbers at all sites over the past six days.

It’s expected that changes like this could happen again in the coming weeks given the fluidity of the situation.

The testing facilities at EPIC and Brindabella have both recently been expanded, a pop-up site opened at Gold Creek School, and one has been proposed for Lyneham High School.

A new testing facility, to be run in conjunction with Capital Pathology, opened at Kambah yesterday (17 August) for high-risk testing. On Monday the facility was used for a few hours to test close contacts from the Greenway aged care facility.

Canberra Health Services CEO Cathie O’Neill said that at this stage most of the redeployments within health have been done on a volunteer basis.

“To date, this has been very successful, but the longer time goes on, and as more pressure is put on us to staff different areas, we may have to ask different teams to move around. This is not our preference. We’d prefer to work with staff on a volunteer basis, so that is what we will continue to do in the main,” she said.

Ms O’Neill thanked staff for their efforts, saying they have already given enormous amounts of their time to the COVID-19 response.

“We’ve also surged our vaccination staff so that we can continue to surge appointments at the government clinics,” she said.

Staff have been redirected from other parts of the health system, including those working on digital health records, administrative positions and back-office roles to assist with the public health response.

Although swabbing has to be completed by registered nurses, support roles can be performed by other staff.

Responding to concerns about what would happen if a member of ACT Health staff was to test positive, Ms O’Neill explained that all staff have been asked to limit their movements.

“In our larger teams, they are working on a mini-team basis model within their larger team so that we don’t have lots of staff crossing over with each other.

“For our particularly specialist workforces, we are taking additional steps to really try to limit exposure for those staff,” she said.

It’s not just a Health response. Across the ACT Government, staff are also being redeployed to assist with the COVID-19 emergency.

At this point, these redeployments have once again been entirely voluntary.

“We put out the call and were very fortunate, for example, to have found some nurses who were working in other directorates, and they’ve come forward and offered their time and help.”

Speaking at yesterday’s COVID-19 briefing, Health Minister Rachel Stephen-Smith expanded the call for volunteers, urging anyone in the community with a nursing background and willing to volunteer their services to contact Canberra Health Services.

Canberra’s lockdown has been extended for another two weeks until at least Thursday, 2 September.

Just prior covid I was visiting a relative in the Canberra Hospital. The area was full with numerous people on ventilators. I wondered back then if a disaster such as a plane crash could be dealt with and my estimation at the time was no chance. I thought the hospital had not changed much since another relative was in IC in 2003. Drop the LR fellas and fix the hospital. Lots of construction work that should keep the Union happy, thus Labor happy with the added value of increased medical and ancillary staff who spend in the economy. Kenyayism construction does not work as well as it did post the 1929 depression. Thus if our dear leadership and undertook an expansion back in the 2000s the ACT would be better equipped in dealing with disasters.

Well done ACT Health and thank you to our health workers 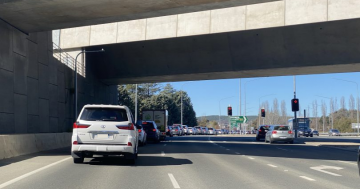