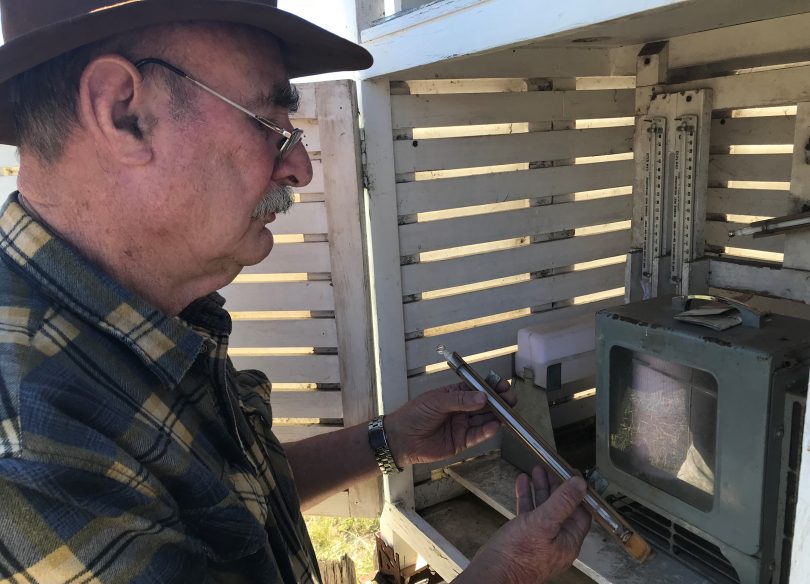 An extraordinary April weather-wise . . . or was it a guide to our future?

In the middle of April, we had near-gale force wind which brought unusual dust and heat from the inland. Unseasonably warm and dry conditions are putting stress on garden plants and on pastures in paddocks.

At Braidwood, the average daily temperature in April was 16.4 degrees, the highest of sixty-two years. The total rain for the month was 14.4 mm, which is within the lowest 15% of Aprils. We can only make these relative assessments when we have a collection of data from the past against which we can draw comparisons.

Roger Hosking is a volunteer observer of local weather at Wallace Street and reports to the Bureau of Meteorology. He has maintained a daily log of weather at Braidwood for thirty-five years. Mr Hosking says “Our conditions here for recording weather are very stable: no jet aircraft exhausts, no heavy industry, and no significant impact from urban sprawl. The observations are real.”

One of the instruments he uses is a thermograph which produces an ink trace of temperature. The illustration shows the chart for seven days from 8th to 14th of April this year.

A thermograph produces an ink trace of temperature. The illustration shows the chart for seven days, 8th to 14th of April 2018. Image: Supplied.

During that week, Braidwood had the hottest day (31.8°) and the third warmest night (18°) on record for April. The burst of heat was felt over much of south-east Australia.

Mr. Hosking said “The high temperatures should not be unexpected. Recent average temperatures conform closely to the rising trend which is evident over the past thirty-five years.”

The illustration below shows that the average daily temperature over the last twelve months is only slightly above the distinct warming trend. Image: Supplied.

The illustration below shows that the average daily temperature over the last twelve months is only slightly above the distinct warming trend. Daily maximum temperatures are rising faster than minimums.

District pastoral conditions are dry. The area has been in BoM defined drought since last July. Some unirrigated shrubs and young trees have exhausted the soil water within reach of their roots and are dying. A frequent question is, ‘when will it rain?’ Once again, a history of rainfall can assist to identify what may occur in the future. 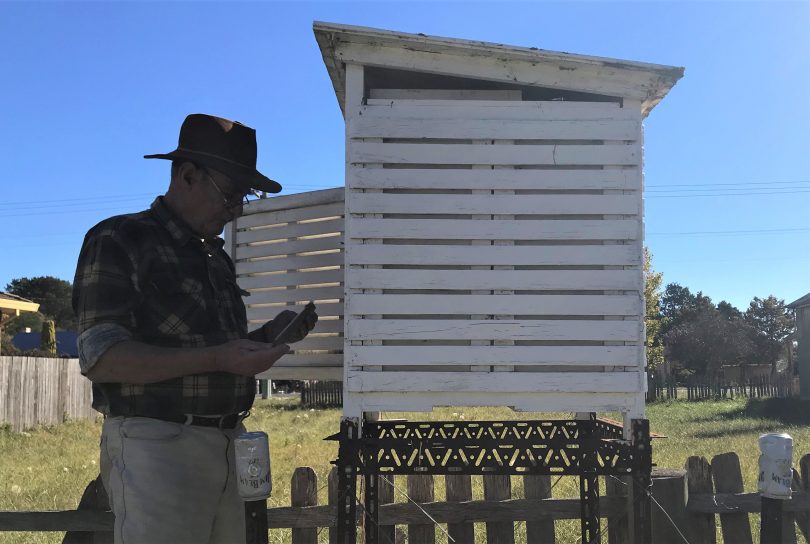 Mr. Hosking has examined past rainfall records. “A ‘break’ of the drought could be: more than 100mm in a month; a three-month total in the top 30%; a saturated-soil runoff event; or preferably all three,” he said. “A break by the end of August is more likely than not and there is a 73% chance of a break by the end of October.”

“So, there we have it,” says Mr Hosking. “Daily temperatures show that local warming is not only occurring, but at a much faster rate than is being debated by pollies. In the shorter term, it assuredly will rain again, but we are likely to get a hard winter first.”

Vague though they may be, these predictions can only be made thanks to a history of interested people keeping watch and recording and reporting their weather observations.

They are lot more accurate than predictions made by climate-alarmists like Tim Flannery have been.

Unusual interpretation, Capital Retro/Dungfungus-2. The article shows a local trend of +0.464 degrees per decade and says “Daily temperatures show that local warming is not only occurring, but at a much faster rate than is being debated by pollies”. Doesn’t seem to differ too greatly from “climate alarmists” as you put it.

Geez dungers, so many climate records have been broken in the last few years; surely you are starting to realise that the alarm bells are in fact ringing?

Ian McLeod - 57 minutes ago
Charles Godworth yes I do and I also upgraded to three phase and will install a Zappi charger, but most won't need it. The po... View
Ian McLeod - 1 hour ago
Ben Garden which is what I'm doing and around town 2KW home charging is fine View
News 27

Robert Taylor - 1 hour ago
I suppose it was unsafe and could not be kept for pedestrians & bikes. Sad View
Stephen Murray - 3 hours ago
I remember the punt that the bridge replaced. View
Christopher Cuba Rabanal - 5 hours ago
I’ve heard the best fish and chips in the bay is closing due to the lockdowns. That’s pretty sad 😢 View
News 27

What’s happened to our Spring weather? You can blame Sydney for that, too