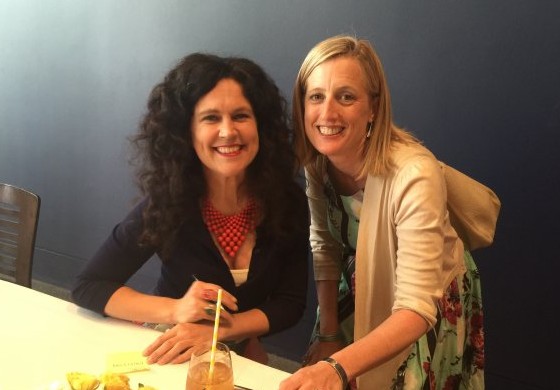 That Senator Gallagher had never heard of British food writer Ottolenghi before yesterday surprised a 400-strong crowd who had come to see her interview fellow vegetarian, political commentator and Kitchen Cabinet presenter Annabel Crabb at the Australian National Gallery, but it was her remark that she didn’t know parmesan had a rind that truly stunned the room full of foodies.

Senator Gallagher switched roles to play journalist yesterday, interviewing Crabb on stage at a sold-out event at the National Gallery of Australia.

The long-time politician clearly relished this new challenge, even mimicking Tony Jones in Q&A mode at one point.

“I’ll take that as a comment,” she said gleefully after an audience member shared a story rather than asking a question.

It was a relatively easy task for the politician, though, because Ms Crabb is so utterly charming and entertaining all of the time, as far as RiotACT can see.

Senator Gallagher opened the proceedings by listing what she and Ms Crabb have in common (she could’ve included the fact that they share a knack for putting together a great outfit but didn’t). She said they were at a similar stage of life, each had three children, were both vegetarian, and shared a passion for politics.

That’s where the similarities ended, however, Senator Gallagher said, because she admitted to knowing nothing about cooking.

Given her other achievements (she was Australia’s longest serving health minister before becoming ACT Chief Minister and then a shadow minister in Federal Parliament within a year of making the move to the Hill), it’s not surprising Senator Gallagher hasn’t had much time to potter around in the kitchen.

The gaps in her food knowledge became apparent when Ms Crabb recommended storing parmesan rind in the fridge to add to minestrone for depth of flavor, and towards the end of the formal part of the event when Senator Gallagher asked Ms Crabb who her favourite celebrity chef was. “Yotam Ottolenghi” elicited a blank look.

Originally from Jerusalem, Ottolenghi is a London-based restaurateur and food writer who writes regularly for The Guardian. He runs Nopi and Ottolenghi, and is the author of five bestselling books, including Plenty, collection of vegetarian recipes is drawn from his column ‘The New Vegetarian’ for the Guardian’s Weekend magazine, and the book we’re sending to the senator.

Speaking of cookbooks, having tasted some little samples of what’s to be found inside Ms Crabb’s Special Delivery (co-written with her dear friend Wendy Sharpe, who delivered several meals a day to Ms Crabb after her first child was born) at the afternoon tea that took place while a huge queue of Annabel fans waited for her to sign their copy, it may well be one to add to the Christmas list.

If it features even a sprinkling of the wit and humour Ms Crabb displayed during the event yesterday, it’ll be a hit with fans of Kitchen Cabinet and her latest multimedia foray, Canberra Al Desko, a series of short interviews with Federal politicians at their desks in Parliament available via ABC iView.

Oh, and if you’ve heard other attendees talking about Ms Crabb’s boldly coloured culottes (they attracted much attention, including a question from a young bloke in the audience who wanted to buy some for his sister), they’re from Gorman, but we couldn’t find them on the designer’s site today. We did find a picture of them on Pinterest here, though please note, Ms Crabb was not wearing the cropped top but instead a white top and navy jacket (or perhaps it a cardigan?).

“….Ms Crabb is so utterly charming and entertaining all of the time“

That she is, and that’s what makes her Kitchen Cabinet so entertaining. She’s not always trying for a Gotcha! quote or promoting herself by embarrassing her meal partners.
She tries, sometimes successfully, to get pollies to drop their guards a little. Turns out that some are actually human.

And no-one wants to watch an awkward dinner party.

Annabel Crabb isn’t vegetarian! She was eating fish on the telly only last week.

Both a delight to read and to salivate over, I never cease to be amazed at Annabel’s talents.

She is one of the few journalists actually worthy of the title and seeing as it is a dying trade she certainly has another career she could readily turn her hand to.

Except to help promote Katy Gallagher/ABC, the point of this article is……….?

Sarah Fox - 5 hours ago
Zalan Filip we will have to check it out! View
Zalan Filip - 15 hours ago
Sarah Fox the one Soph was going on about... reminds me a bit of the huge market thing in Castlemaine. View
Angela Doyle - 17 hours ago
Jacinta Elliott yes please! View
Opinion 107