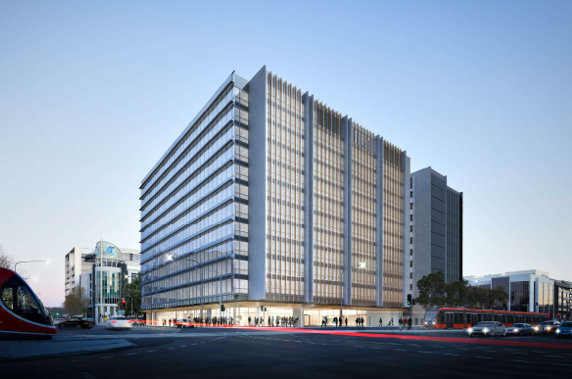 Civic Quarter 2 will be a gateway address to the Canberra CBD. Image: Amalgamated Property Group.

Plans have been lodged for the second stage of Amalgamated Property Group’s Civic Quarter commercial development on Northbourne Avenue at one of the city’s key intersections.

Amalgamated Property Group’s $104 million, 13-storey Civic Quarter 2 development will stand on Block 34 Section 26 on the south-east corner of the intersection of Northbourne Avenue, Barry Drive and Cooyong Street, the gateway to Canberra’s CBD.

Amalgamated says Civic Quarter 2, which will complement the existing Civic Quarter 1 next door, will be a new landmark address for companies ready to embrace the workplace of the future.

Workers will also benefit from a central atrium that will allow natural light into the centre of the building.

The development application says the project will include ground-floor retail, cafe and commercial spaces, foyer, reception and security areas, and 11 floors of office space (levels 2 to 12).

There will be two basement levels for car parking and end-of-trip facilities for bicycle riders, with storage for about 200 bicycles and male and female shower and locker facilities.

The basement car park will cater for about 172 vehicles and be serviced by a previously approved laneway within adjoining Block 35 to the south, with a ramp leading down from the laneway.

The development will include the laying of new pavement around the building within the Northbourne Avenue, and Cooyong and Mort Street verges.

The DA says this will extend into colonnaded areas along the northern, eastern and western ground floor frontages of the building which, when combined with awnings at first-floor level, will provide pedestrian shelter and amenity.

Existing large trees within the Mort Street verge will be retained, and new street trees (Eucalyptus Mannifera) will be planted within the Northbourne Avenue verge.

Planter beds will be erected within the Mort Street verge, and include seating around its edges, as well as additional bench seating. Bicycle racks will be provided for site visitors, and bollards will separate cars and pedestrians.

“The proposed landscaping will help integrate the proposed office development with its surrounds, provide modern paving to the adjoining verge more consistent with other areas of the City Centre and its surrounds, and provide outdoor amenity for office workers within the proposed and surrounding buildings,” the DA says.

“It can also be seen as an extension to the nearby Veterans Park to the south, allowing a landscaped spine to extend north along Mort Street toward Cooyong Street.”

A separate DA has been lodged for the demolition of structures on the site, which has been used as a construction compound.

The proposal also needs to meet special requirements under the National Capital Plan.

About time. Was worried about that demolition ground that has been sitting like a ghost for so long after the crane was dismantled.

Robyn Holder - 9 hours ago
Get out of here Coe. You're rubbish, the same as the federal mob. View
Bethany Williams - 16 hours ago
Charlie McDonald agree! That’s why the Canberra Progressives are going to run lots of candidates at the Oct election (full... View
Jane Kim - 18 hours ago
You could not reach our expectations in a million years, Alistair! View
News 151

Richie Suryadi - 11 hours ago
Be good if they got the first stage right in the first place View
Keith Prinn - 16 hours ago
Queanbeyan needs this more than anything View
Alan Dalling - 20 hours ago
Jorge Garcia no it's not. Stage 2 will nearly double the commuting time between Woden and Civic. Will remove a couple of hund... View
Opinion 26

Michael Roy - 23 hours ago
Amanda Evans an example of one of the failings of a dendritic road network. View
Randy Goldberg - 2 days ago
Matthew Beale Guess I don't travel Parkes Way sufficiently to always see them. View
Shayne Borger - 2 days ago
Canberrans have become a city of whingers and have nothing good to say. Being active and healthy and sport tourism brings $M... View
News 78

@The_RiotACT @The_RiotACT
Under police escort from #Bungendore to #Canberra, a humble fridge received a hero’s welcome when it arrived at @nma today https://t.co/BojPcIj9kU (9 hours ago)

@The_RiotACT @The_RiotACT
Worried about bikie violence? A new report says the threat in the ACT is exaggerated, with only 1 per cent of crime in the Territory committed by gang members https://t.co/TXzeFVNUSE (12 hours ago)