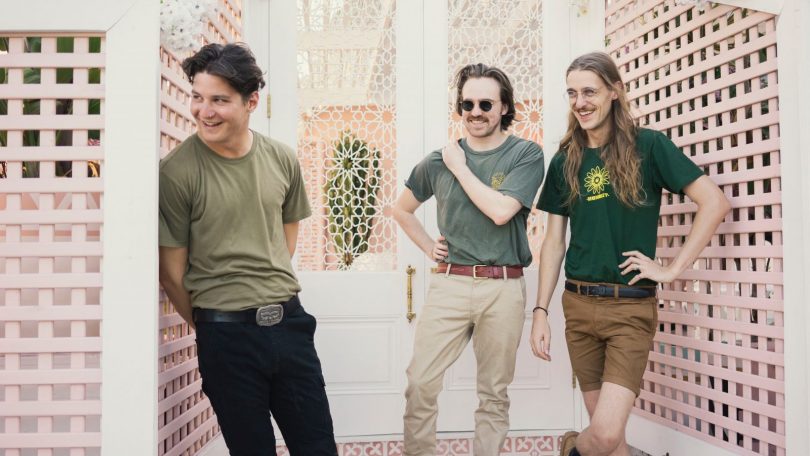 They might have one of the most un-googleable band names in Australia, but Brisbane’s Bugs have been making their way into the hearts of Australia’s music community over the past few years.

It’s been all systems go for the three-piece since the release of their new album Self Help earlier this year. Full of pop-punk hooks delivered with undeniable optimism, tracks like ‘Seriously’ feel like a smack in the face with massive guitars, imploring you to take things a little less seriously.

It’s barely been a month since their last visit, which saw them supporting Grinspoon at the UC Refectory, but they’re already heading back to Canberra for their own headline show with some very good friends in tow. We caught up with frontman Connor to find out how they’re all holding up.

How did you find the show at UC Refectory with Grinspoon?

It was awesome, so much fun! It was probably one of my favourite shows of the tour so far. Not just saying that to blow smoke up Canberra’s arse but the crowd was really friendly and repping the lyrics and shirts. They really cared about us playing. The sound was incredible once there were people in there, it was really cool.

Bugs have a super cult following in Brisbane. How has the transition been becoming a national touring band?

Um, I don’t know, I’d say that we’re still in the transition and we probably always will be. People are always going to support you closer to home, particularly in Queensland because there’s a strong sense of local community. It’s been pretty easy because most other cities in Australia have similar music communities, it’s not like what you’d get somewhere else like in the UK or US for example. We now know heaps of different people in other cities, it’s a slow grind but it’s really nice because now we have a familiarity with our fanbase.

Do you have Brisbane buddies that you like to team up with?

Yeah! Sweater Curse who we’re taking on the album tour. Chris, the guitarist, I actually live with him, so I’m super close with them and have been for years and get along with a house on fire. WAAX we’ve gotten close to in the past six months. I guess we understand each other being from the same place and you know as you get older, it gets harder to make friends and stuff. If I’m not playing, I’m always at shows because even though you’re not making friends, it shows that you’re still actively supporting the scene, people do that really well in Brisbane.

We’re actually super good buds with The Hard Aches; we’ve now done 30 shows with them so far on the Grinspoon tour.

Did you ever do the iconic Canberra school trip as a kid?

No! The first time I came to Canberra was the Grinspoon gig. We were only there for about 24 hours, everyone was super lovely and interactive. The community is really nice and well connected. We stayed with Mulgara, you can tell they have a really tight-knit community.

You have Sputnik Sweetheart joining you for the Canberra show. How are you feeling about playing with them?

Yah! There’s this great single they have ‘Us Girls’ that has been added to my playlist and I’m stoked to be playing with them.

You can catch Bugs on their Self Help album tour at UC Hub on Friday, 15 November alongside Sweater Curse, TOWNS and Sputnik Sweetheart. Student price tickets are $12.97, GA $22.97, available via ucrefectory.com.

I used to like a band called ON. Try googling that...

Marc Blackmore - 33 minutes ago
Another scheme to disincentive investors into the market reducing supply and end result is more pressure on rent rates. The o... View
Jeffrey Brown - 38 minutes ago
It's a great idea. It should definately apply to a situation where the Landlord does not honor the Lease Agreement through th... View
Natasha Van Oudheusden - 39 minutes ago
Often the landlords are just normal people trying to provide for their families. How are they supposed to afford it? View
Community 8

Helping ACT - 36 minutes ago
Roseanne Howes I am proud of Slabsforheroes too. A history written by them couple of years ago. I am part of them.... View
Helping ACT - 41 minutes ago
Hi Jenny thank you. Let us keep helping. Humanity needs it. View
Jenny Mason - 2 hours ago
Congratulations and many thanks for all your hard work, for many, many year, Mohammed Ali!... View
News 23

Aaron Nicoli - 39 minutes ago
It’s also so much safer now… 60km/h jam brakes on for the camera, accelerate back out to 60… It’s achieved nothing fo... View
Phil Hogan - 1 hour ago
Got to pay for the tram 🙄 View
mark boast - 6 hours ago
Is a speed limit a “never exceed” or a permissible maximum plus/minus 10%? Cameras don’t image opinion. Time to move on... View
News 3