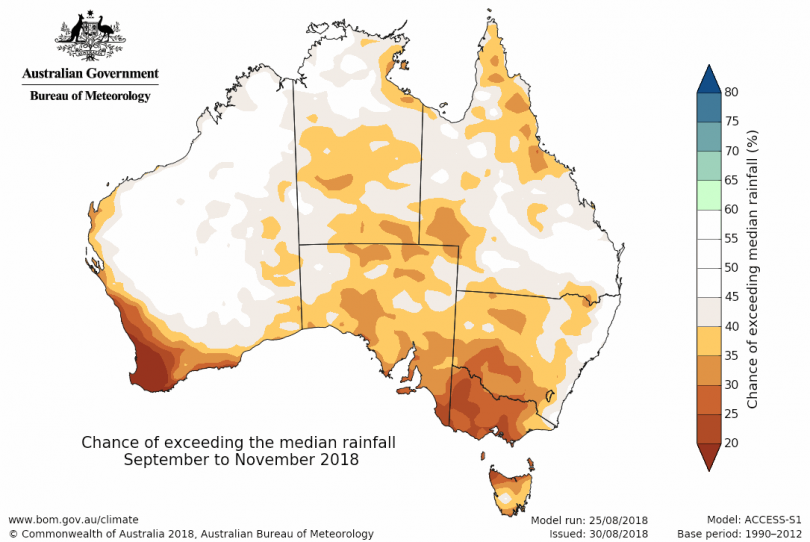 The Bureau predicts weather conditions will not be looking up for a while. Image: Bureau of Meteorology.

If you are a farmer or gardener in the Capital Region, the latest outlook from the Bureau of Meteorology makes grim reading, with spring expected to be warmer and drier than average, but those frosty mornings to persist.

Climate modelling also suggests a higher than normal chance of an El Niño forming in the spring.

Bureau climatologist and Manager of Long Range Forecasting Dr Andrew Watkins said the ACT had about half its normal winter rainfall, and daytime temperatures, despite what people might think, had been about 1.3 degrees warmer than average, consistent with tempatures across New South Wales.

This was consistent with the warming trend of recent decades in Australia and globally as well.

But the dry weather has meant slightly cooler than average nights, resulting in the run of heavy frosts that Canberrans have woken up to this winter.

They may well welcome news of a warmer spring but the Bureau’s Spring Outlook says that with clear skies likely, the risk of frost and cold nights will continue in the south, although over the course of the season night-time temperatures look like being slightly above average.

And drought areas, including the ACT region, are less likely to see significant respite in the coming three months.

Dr Watkins said that recent rain across New South Wales had not had much impact, particularly in the south-east, and the state was on track to have one of the driest winters on record.

It was also set to be in the top five warmest winters on record, and the combination of low rainfall and high evaporation rates meant a lot drier soils over much of NSW, particularly in the south-east.

The outlook will also have fire authorities on edge, with many areas including the ACT bringing forward their bushfire periods and preparing for a long, dangerous campaign ahead.

Dr Andrew Watkins said much of the eastern mainland had experienced an exceptionally dry 2018 and the outlook was not great news for farmers in drought-impacted parts of the country.

“These regions need a lot of rain to break the current drought,” Dr Watkins said.

“Like all Australians, all of us at the Bureau of Meteorology are hoping those affected by the drought will get the rain they need soon.

“Unfortunately, our outlooks show odds favouring a drier and warmer-than-average spring for many areas.”

The outlook suggests spring rainfall is likely to be below-average for much of mainland Australia, with strongest chances (above 80 per cent) of a drier-than-average season in southern NSW, Victoria and south-west Western Australia.

The best hope for any significant rain is later in the season.

The Bureau says one of Australia’s main climate drivers, the El-Nino-Southern Oscillation (ENSO) is currently in a neutral phase, however the Bureau’s ENSO Outlook is at El Niño Watch, meaning the chances of an El Niño forming in the coming spring are 50 per cent, roughly double the normal chances.

Climatologist Felicity Gamble said this was unusual because an El Niño event would typically develop in late autumn or winter, “so this is quite a late development if we do cross those thresholds”.

The saving grace may be that the event may weaken as we head into summer.

But Dr Watkins said that a number of international models were also predicting a positive Indian Ocean Dipole event could potentially develop during spring which would exacerbate the drying trend.

Grace Emily - 55 minutes ago
Sarah Finnigan I’ll go dump our recycling on friday. Glenn Archer is there any recycling that needs dumping from the old pl... View
Joshua Andrew Morgan - 3 hours ago
Julie Macklin we pay rates. the problem lies with the unions and gov. gov need to scrap the unions and hire an outsider,, View
Joshua Andrew Morgan - 3 hours ago
Clinton Berry listen to this union muppet. go serv your coffee View
Motoring 7

Rob Thomas - 2 hours ago
Floriade? View
Tim White - 2 hours ago
David Perkins you do know that it created jobs and brought millions into our local economy and in some cases kept many small... View
Mark Whithear - 8 hours ago
Nope it’s still on in Canberra. At Red Cedars Motel.... View
News 97

Tim Hutch - 7 hours ago
The best way not to give them your money is to do the speed limit. It's really not that hard. View
Rosie Jennings - 11 hours ago
Better if there were more mobile units to catch speeding tailgaters. This I was towing a truck home today it was so close beh... View
David Brown - 11 hours ago
That is irrelevant. They are set low all across the country for exactly the same reason. $$$$$$ View
Food & Wine 21

Shane Westmore - 18 hours ago
Ch.9 are still stuck in the 90s & so are many of their viewers... it's like they want you to order Kayo View
Anthony Chase - 18 hours ago
Its got little to do with football and everything to do with ratings. View
Marlene Valenzuela - 19 hours ago
Possibly not.... Not unusual!! View
News 9

Helen Prior - 19 hours ago
Kingston was a friendly safe place to live.Now all grog and selfies. View
show more show less
*Results are based on activity within last 7 days

A 16-year-old boy will face court today via video link charged with the murder of the 18-year-old man in what Detective...
News 48

The telegenic Dr Nick Coatsworth became a household name during the Commonwealth response to COVID-19, and before that led Australian...
News 97

Leadfoot drivers beware - the ACT's speed detection net is about to be widened with the addition of two new...
News 48

Household waste and recycling collections will be disrupted on Monday (2 November) due to industrial action by drivers employed by...
Opinion 48

@The_RiotACT @The_RiotACT
Canberra music fans are spoilt for choice when it comes to spooky shows and parties to head out to this week https://t.co/lHlf5AKX4o (5 hours ago)

@The_RiotACT @The_RiotACT
Have you ever wanted to run away and join the circus? Belco Arts has a unique opportunity for Canberra's youth to learn some dangerous tricks https://t.co/Xr1M7wv5EG (6 hours ago)

@The_RiotACT @The_RiotACT
Whether you prefer hotcakes, crepes or pancakes, Region Media has teed up three tempting places to treat yourself https://t.co/TfY4mcE231 (7 hours ago)