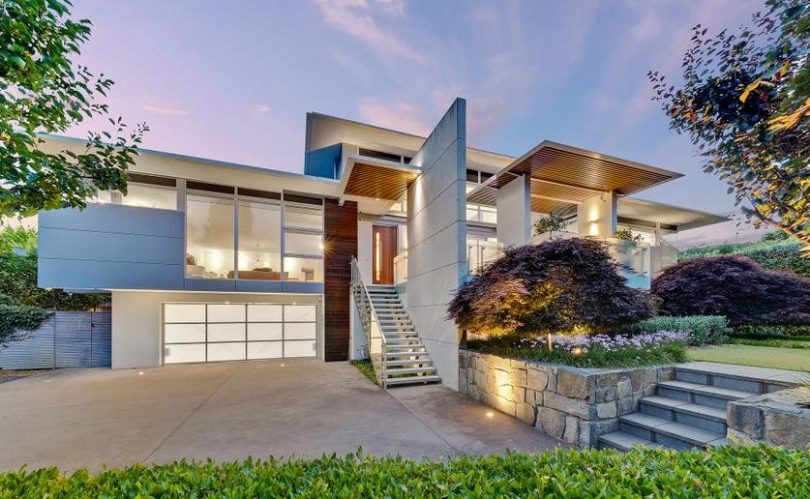 The steam is coming out of the ACT housing market with price growth slowing in February as a combination of more listings and reduced affordability begins to bite.

Prices are still rising, just at nowhere near the frenetic pace of the past year or so. The overall rise for all dwellings fell to 0.4 per cent compared with January’s increase of 1.7 per cent and December’s 2 per cent end-of-year leap.

House prices, where the bulk of the growth has been, edged up 0.3 per cent according to latest monthly data from CoreLogic. Units and townhouses were steadier at 1 per cent, reflecting the ongoing shift from buyers to more affordable properties.

House prices rose 1.8 per cent in January; units and townhouses increased 1.3 per cent.

Over the past 12 months, house prices have climbed 25 per cent and units and townhouses 23 per cent.

That’s brought out the sellers with higher listings for auctions but they may have to adjust their expectations as buyers become more choosey and baulk at sky-high prices.

Last Saturday’s auction results showed a 69.8 per cent clearance rate, with 67 properties sold from a reported 96. Overall there were 123 listed for auction. 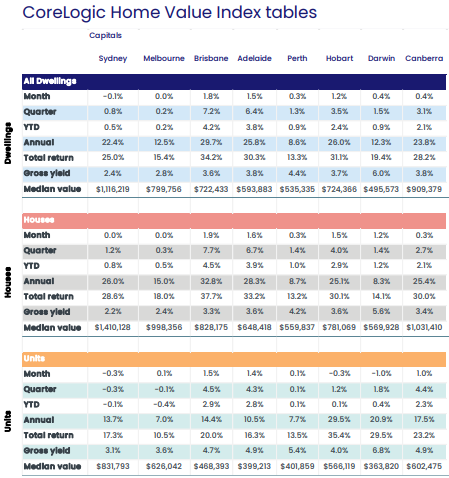 The result comes after four weeks of clearance rates at about the 80 per cent mark. According to SQM Research, there are 92 properties listed this week for Saturday and 37 during the week.

While price growth is moderating, the top end of the market is still going strong. A Red Hill property brought $4.65 million to lead the top 10 results.

The multi-award-winning four-bedroom luxury home designed by TT Architecture at 20 Scarborough Street on a 1096 square metre block was completed in 2010. The former modest brick house on the site sold in 2007 for $1.1 million.

Sold by Mario Sanfrancesco of Blackshaw Manuka, the Red Hill home attracted interstate and international interest but went to Canberra buyers against two other registered bidders.

The rest of the field, from mostly inner-city suburbs, all topped the million-dollar mark, with a Yarralumla property selling for nearly $3 million.

CoreLogic says February’s growth of 0.6 per cent nationally marks the lowest monthly increase since October 2020 and is down from 1.1 per cent in January and a cyclical peak of 2.8 per cent in March 2021.

READ ALSO Units, townhouses pick up pace as houses post 28 per cent gain in a year

Sydney (-0.1 per cent) posted the first decline in housing values since September 2020.

While the total number of properties advertised for sale across the nation in February is 13.3 per cent lower than the same period a year ago, advertised supply levels are gradually normalising.

CoreLogic director of research Tim Lawless says more choice translated to less urgency for buyers and some empowerment at the negotiation table. He says there is also a softening in demand caused by worsening affordability, higher mortgage rates and lower levels of housing-related sentiment.

Home prices have also been rising far faster than wages which have been in a slump for some time. While the Reserve Bank of Australia (RBA) has kept the cash rate at its record low level, banks have been adjusting their rates in anticipation of a change and as inflation takes hold.

But CoreLogic says open borders, domestic and international, should support housing demand. Improving economic conditions and higher wages growth should also help to keep a floor under housing demand and distressed property sales to a minimum.

In Canberra, where well-paid government jobs and spending tends to insulate the economy, price growth may come back to more normal levels. But demand is expected to stay strong, especially at the higher end of the market and for the more affordable and findable medium- to high-density properties.

Great thing about Canberra is that it’s insulated from most of the price cycles faced by other capital cities. With interest rates tipped to rise we may see slower growth in Sydney and Melb. Brisbane will likely fall back hard unfortunately due to their floods but Canberra should hold value in the medium term.

Canberra house prices dropped like a stone when a very large knife was taken to the public service at the turn of the century, prices have really only recently recovered to be on par with other large cities with universities, hospitals, galleries etc.