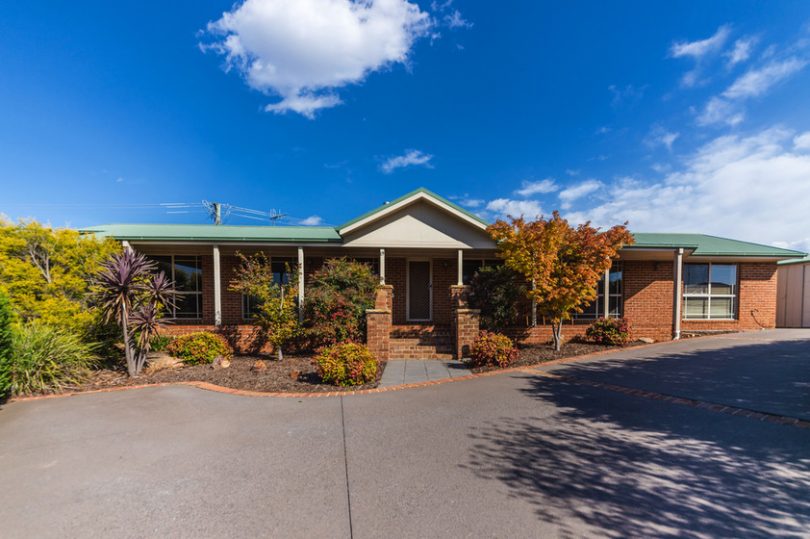 This four-bedroom home on a large block at 19 Nimbus Place, Karabar, is on the market for $730,000 through Ray White Queanbeyan/Jerrabomberra. Karabar has the second highest housing forecast price growth in Australia.

Two suburbs in the Canberra-Queanbeyan region have taken out the top rankings in Australia for affordable locations with the highest housing forecast price growth in the next three years.

New research by property research platform sellorhold.com.au, part of the Select Residential Property Research Group, predicts that investors will be better off by more than $120,000 in the next three years if they buy houses in Charnwood in the ACT or Karabar in Queanbeyan.

By contrast, the research showed that holding on to properties with poor price potential, such as Rosebery in Darwin and Henley Brook in Perth, could cost owners dearly in just three years.

Head of Research at Sell or Hold, Jeremy Sheppard, said the research analysed suburbs with median house prices between $400,000 and $600,000 located in significant urban areas (it excluded units).

The analysis of the 15 locations with the best prospects of a price upswing over the next three years identified suburbs within strengthening major property markets.

The top five localities were in Canberra-Queanbeyan, the Gold Coast, Brisbane and Hobart.

“The Canberra-Queanbeyan region has taken out the first and second places for forecast price growth, partly due to affordable house prices close to our nation’s capital,” Mr Sheppard said.

“Both Charnwood and Karabar are near Canberra, which means housing is in strong demand from public servants.”

Mr Sheppard told Region Media that the analysis is based on an algorithm which measures more than 17 different metrics based on supply and demand and including factors such as auction clearance rates and whether properties are being discounted.

Third on the list is Bilambil Heights in the NSW Gold Coast where investors are forecast to see an increase of $105,787 in three years, followed by Underwood in Brisbane with an increase of $97,727 and Geilston Bay in Hobart with a forecast increase of $88,949.

Mr Sheppard said that number three and four on the list were both locations in southeast Queensland, where housing affordability, location, and access to major employment nodes were some of their main attributes.

“Bilambil Heights is in the Tweed Heads region of the Gold Coast. Not only does the suburb boast water views, Surfers Paradise is also only about 30 minutes’ drive away,” he said.

“Hobart has three of the top 15 results, which shows that there is growth still remaining in the Apple Isle capital,” Mr Sheppard.

“If its name didn’t give it away, the appeal of Geilston Bay is partly due to its desirable location on the Derwent River while also only being seven kilometres from Hobart.”

Mr Sheppard said low growth forecasts were common in a number of suburbs in Darwin and Perth, which means that investors would likely be better off looking further afield.

“The research showed that vainly holding on to properties in some of these locations could see your property wealth erode every year,” he said.

“Savvy investors recognise that, even after transactional costs, they could potentially be better off by tens of thousands of dollars in a handful of years by simply literally cutting their losses.”

Wow this is sounding all too familiar? HAHAHA

Glenn Gorman you writing for the riot act these days?

Karabar might have one suburb name but it is effectively three to four different suburbs with pretty much entirely different house types for the most part.

The area south of Southbar road and west of Cooma rd.

Karabar heights west of Donald Road (Google maps lists that area as having the highest elevation in Karabar).

and central Karabar for the parts around the schools.

Which part is about to get a property value rise?

Southbar and Cooma Roads are likely to get busier and busier as Googong gets bigger.

The bypass hopefully will ease that so maybe those roads will go up in value as a direct result.

I have heard that there is a road planned to go straight to the Monaro hwy/Isabella Drive roundabout from Googong but doubt if we will see that in the next 5 years.

Tag me in this in 3 years and we'll compare prices 🤣

Prue Teasdale get in now!

John Egan! Charnika is the place to be

Jake Hyland you've moved from one to the other

Shawn Gardiner I think it's just where I go. I'm the best for land value

You couldn’t pay me to live in those suburbs

Leigh Thwaite well you are missing out

I live in Karabar in a good area and it’s great, leafy big yards very quiet park right across the road. But I’m close to Canberra ave away from

I grew up in Belconnen, bought my first house there and then moved to Tuggeranong.

I now live in Karabar and can tell you it is a nice place to live.

Leigh Thwaite and your reason is???

Leigh Thwaite thanks Leigh. Not having you there will ensure the prospects remain positive. Very community minded of you.

That is because they are both part of the same metropolis.

Brooke Hendry Who called it years ago? (hint: it was me, the property genuis)