As the weather gets cooler, there’s nothing quite like a steaming bowl of Vietnamese pho for a hearty and cheap meal, which is how I ended up at Pho Hub on Benjamin Way for this week’s cheap eats.

Despite working just around the corner, I only discovered Pho Hub last week. Apparently it has a very loyal cult following, so I suspect those who work in the area are doing their best to guard a well-kept secret (sorry for blurting it out on RiotACT, guys). 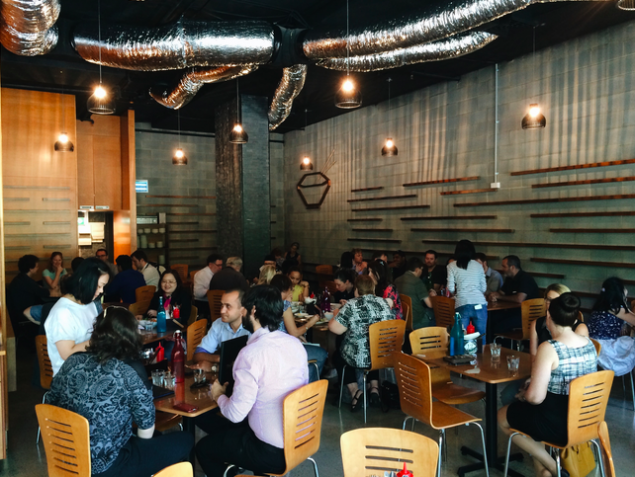 My partner and I arrived for an early lunch and found the restaurant packed full of diners (further confirmation that Belconnen’s office workers know something the rest of us don’t). A waitress promptly found us a table at the back of the restaurant and brought us water and glasses while we perused the menu.

If you stick to the rather extensive pho and laksa menus, you’ll find plenty of cheap lunch options ranging from $12.50 for a regular bowl of beef rice noodle soup up to $15 for pork and seafood noodle soup. Pho Hub also does stir fried noodles (between $13.90 and $19.90) and house specialties including salt, chilli and shallot prawn ($18.90), Vietnamese shaky beef ($21.90) and caramelised pork chop ($19.50). 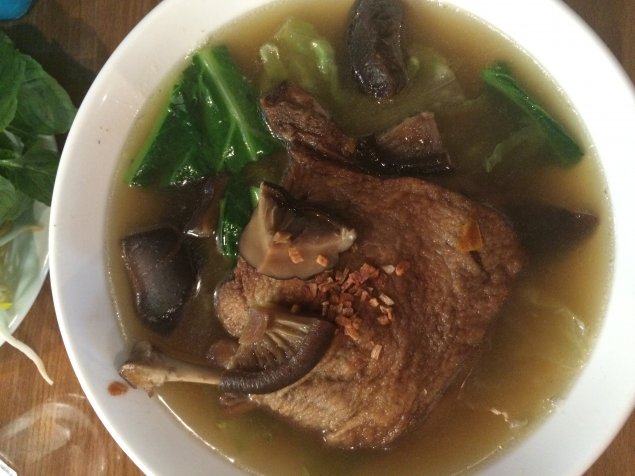 I selected the duck egg noodle soup (roast duck, shiitake mushrooms and green vegetables with egg noodles, pictured above) for $15, and my partner ordered the crispy skin chicken noodle soup for $14.50. I was also curious to try the satay chicken skewers, which were an $7 for two, and even though they didn’t squeeze into our $15 budget, you could definitely eat a single serving as a light lunch. 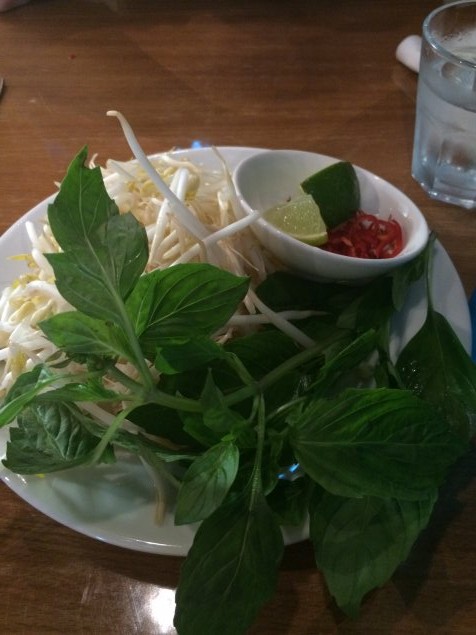 Even though the restaurant was full, our meals took less than ten minutes to arrive. And when they did, I was worried that the food wouldn’t fit on the table. In addition to our two enormous soup bowls, we also had a plate stacked high with bean sprouts, fresh chilli, lime and Thai basil (pictured above). My partner’s crispy chicken came out on a separate plate too, to prevent it getting soggy in the soup (pictured below). 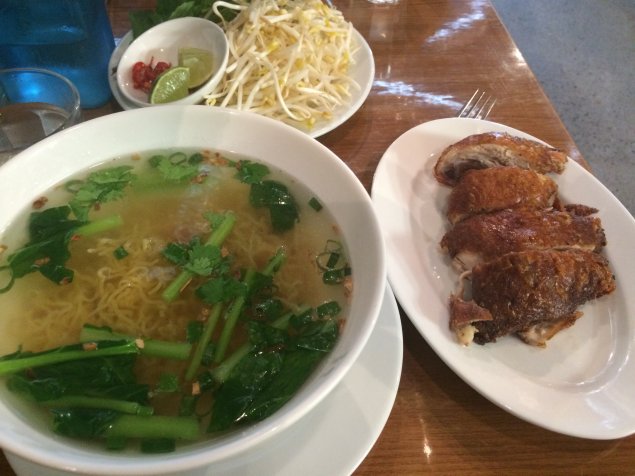 The duck egg noodle soup was one of the best soups I’ve eaten in a long time. Lots of shiitake mushrooms, flavoursome broth and a really generous amount of duck for $15 (it does come with the bone still in, which is fine as long as you don’t mind making a mess). Though it was a big meal, the extra bean shoots, lime and chilli prevented it from feeling heavy or stodgy.

The service is friendly and efficient – our empty bowls and plates barely had time to hit the table before they were cleared away. This was my first time to Pho Hub, and I’d love to visit again… Just don’t tell its current clientele that I sent you.

Hot in the City: Ramen get it! The comfort food Canberrans are queuing for

Hot in the City: Ramen get it at Manuka’s newest noodle spot