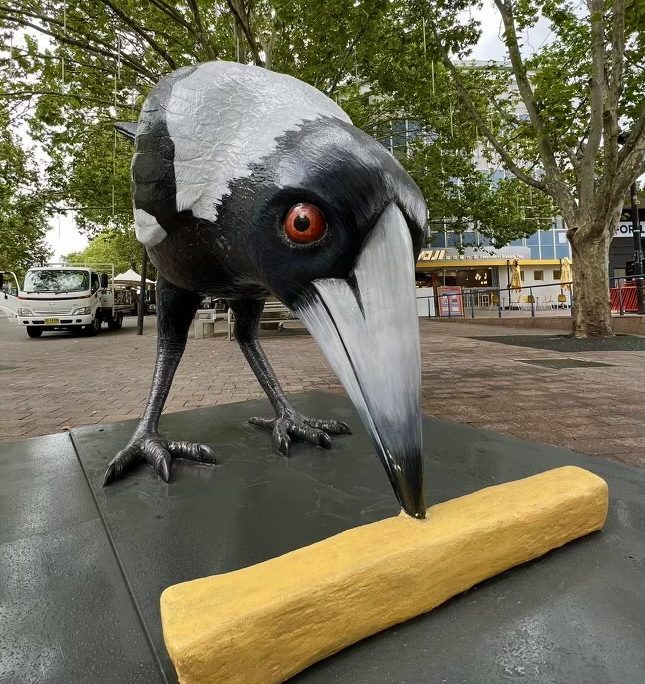 Big Swoop is expected to be removed from Garema Place this week. Photo: Yanni Pounartzis.

It was designed to be Canberra’s newest icon – a massive magpie sculpture in Civic – but the “Big Swoop” will now be removed from the city centre for repair following damage by vandals.

Just over two weeks ago, hours after its official unveiling, Canberra artist Yanni Pounartzis’ masterpiece was attacked by vandals, who smashed the bird’s feet as well as the chip it was feasting on.

Now, disappointed and devastated, Yanni and the City Renewal Authority have decided to have the sculpture removed and repaired.

“We’re removing the sculpture to prevent it from any further damage, and we’re going to put it into a facility where we can repair it and look at ways where we can create a more robust and stronger magpie basically,” Yanni said.

“Unfortunately, although it’s had an overwhelming response and it’s incredible how many people already care about it, there’s a few people out there who are determined to test its strength and capacity for foolish reasons.”

Yanni said he had been in talks with the City Renewal Authority to determine when the repairs would start, but a timeframe was yet to be confirmed.

“They’re fully supportive of repairing it and rectifying the damage,” he said.

“The priority now is to remove it and repair it and then we will decide if it goes back to its original place or perhaps a safer place.”

Yanni said the sculpture could return to its original home in Garema Place, but “the options of relocating are still part of the conversation, we haven’t decided yet”.

“One of the main things we are looking at is raising it on a plinth off the ground,” he said. “The whole idea was to really connect with people on the ground and make it interactive. Unfortunately, people took advantage of that.” 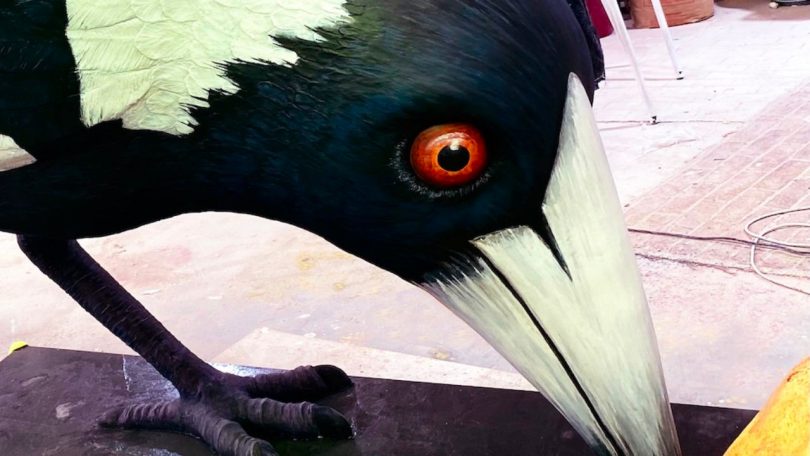 Big Swoop was funded by a Placemaking Grant from the City Renewal Authority and made by Yanni Pounartzis. Photo: Supplied.

A City Renewal Authority spokesperson said Big Swoop was designed to be durable and resilient, because it was the artist’s intention that the public could interact with it.

“Big Swoop has been a big success in helping activate Garema Place … and we are saddened to see that some members of the community are testing the limits of this much-loved artwork,” the spokesperson said.

“While we would like to understand why this has occurred, our immediate concern is to work with the artist, Yanni Pounartzis, to have it removed as soon as possible for repair and to plan how to prevent further damage from occurring.”

The damage has been reported to ACT Policing. 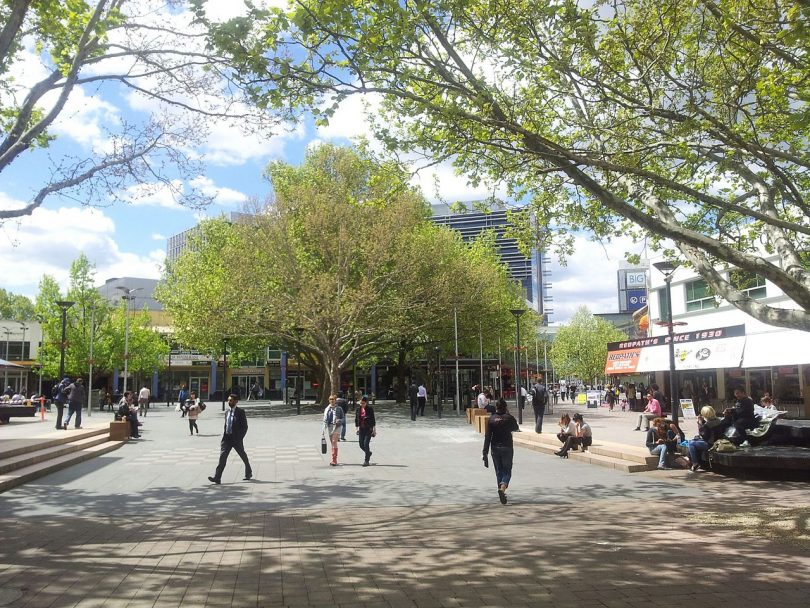 Yanni said, in future, he would look for a location that has more security. Photo: Maksym Kozlenko.

“I have filed a police report for vandalism and the police are looking into it,” Yanni said.

“They said they would check the CCTV footage and if they can identify the people then they will pursue it, but right now it’s just a police report for vandalism.

“We don’t know if there’s actually footage of them, but we’re going to see if there’s anything found.”

Yanni hopes people will respect his artwork in the future.

“Unfortunately there will always be somebody who will try to destroy it but hopefully when it’s been rectified, it’ll be much stronger and a lot more robust,” he said.

Yanni said he was buoyed by how many people had come to care about his sculpture in such a short amount of time.

“The community and the City Renewal Authority have embraced the magpie and want it to survive, they don’t want it to disappear,” he said.

“It’s resonated with people around the country and it’s been quite incredible.”

The repairs are expected to take some time.

“We are trying to rectify it as soon as possible, but our priority right now is to remove it and protect it from further damage,” Yanni said.

I don’t mind if Big Swoop was situated in my yard. Difficult for vandals to access and guarded by a squadron of highly trained and vengeful magpies.

Such wanton vandalism! Same ones who fear “climate change”, and law and order!! No ambition, No concept of beautiful work, ( done , of course , by other hard working Artists)and NO control over themselves!! Poor Dopes!!!!!

Once it is repaired it should be relocated to Belconnen, perhaps next ro it’s feathered kindred – the penis owl

Civic is a disgrace, meth heads and crack heads everywhere. Try walking to work through civic in the morning and a prepared to be welcomed with the smell of human faeces. Only a matter of time before someone is stabbed. A blot on the city and nothing with be done about it.

You mean until a another fatal stabbing?

“I have filed a police report for vandalism and the police are looking into it,” I wouldn’t expect much from that. The current crop of ACT police officers are too busy with their
Bat belt gadgets, Disco decorated cars and eating sushi to ‘investigate’ anything. Get an offender and put them before the Courts and prove me wrong. Happy to eat my words and apologise if they grab the idiots who have done this. They could start with a clean up of Civic if they want to reduce the problems there.

They have had him hanging from one of the many ivory towers in town.

Seriously did they believe it would not be vandalised……….?

You kind of have to expect this given the sort of characters we are enticing into the city.
Was it a shock to anyone that the expensive brass fitting were lifted from the new install by the lake.
In the end they justify more CCTV to do mass surveillance on us even more.

I hope there was cctv..little s…s🤬

Time to clean up the trash is the city centre who vandalise and threaten … do not accept this behaviour in our city .. this is why people stay away

Install cctv specifically focussed on the artwork – then make sure any damage is followed up on and the resulting convictions (and not just a slap on the wrist) gets reported on. Make it unattractive to do – tho this does seem targeted …… perhaps fellow artists who didn’t win the tender?

It’s upsetting. I haven’t even seen it yet! I LOVE magpies and I think the statue is beautiful!

People said this would happen. How sad it came true. What’s wrong with people that vandalise and spoil our enjoyment of such things?

Feet and beak/chip. Sounds like someone wanted to remove it, those are the three attachment points.

Emily Debenham 😢😢😢 this is why we can’t have nice things!

Really hate DHs who spoil enjoyment for others. Can better CCTV and alarms be installed?

What an infuriating disappointment.

Probably these winners i video’d a few days ago.

Such a lovely piece! Hope they find a good solution to keep it safe and have it improve Garema Place!!

Why are there so many morons who can’t stand anybody enjoying something. Always have to destroy things. Just nasty people 😡😡😡

what is wrong with people!!!!

hope they lose an eye next spring

The orange fence around it makes sense now, I saw it the day after it was installed & people’s pic’s were ruined by the fence.

At least it didn’t have to wait for the paint to fade so it looked like something the sculptor didn’t intend, unlike a certain owl.🦉

Dave Dran bold of you to assume it was unintentional

Derek Knight May magpies poop on their heads when they least expect it!

What is wrong with these vandals. This is such a moronic act

And the Hoodlums are probably reading this laughing their heads off. Idiots at the very least!

Phil Essam it’s a big assumption that they can read. 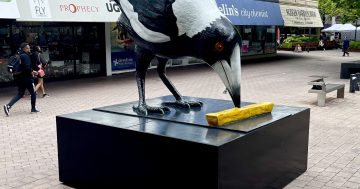 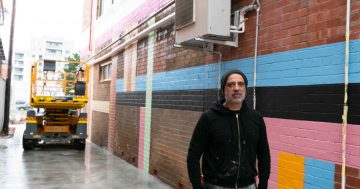 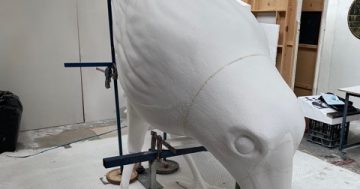 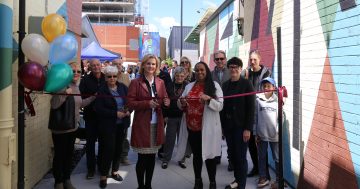 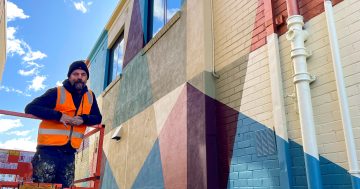 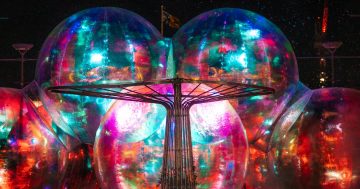