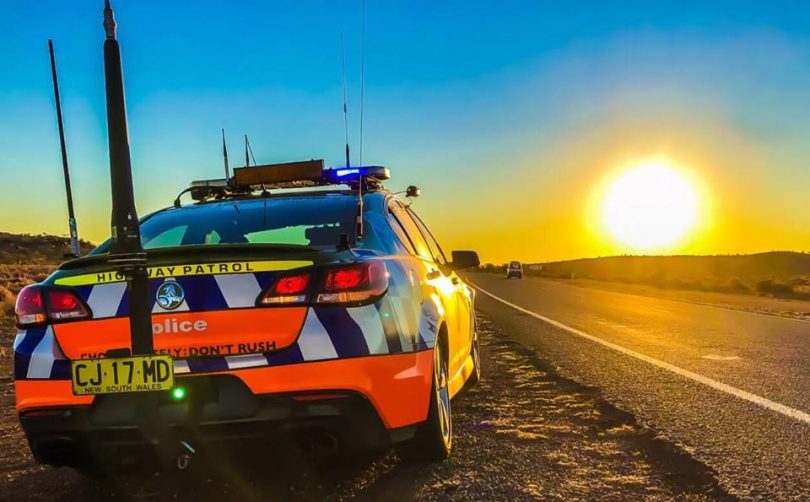 Police officers have arrested a woman near Bungendore who was more than six times over the legal limit. Photo: NSW Police.

A member of the public who witnessed a car being driven erratically on the Kings Highway late yesterday (1 October) has helped police arrest a Canberra woman who returned a positive alcohol reading more than six times the legal limit.

The 38-year-old woman from Curtin, driving a blue/green Nissan Maxima, was stopped by police at about 6:25 pm at Carwoola near Bungendore where officers from the Monaro Police District obtained a positive roadside breath test.

The woman was arrested and taken to Queanbeyan Police Station where a breath analysis returned a positive reading of 0.308.

The woman was charged with driving with a high-range prescribed concentration of alcohol and her licence to drive in NSW was suspended. She will appear at Queanbeyan Local Court at a later date.

Monaro Police District’s officer-in-charge at Queanbeyan Inspector Charles Hutchins said the actions of the member of the public who reported the woman driving erratically has potentially saved the lives of other motorists and the driver.

“There is every possibility that this member of the public saved the life of the woman or a member of the community by taking the initiative to report this driver,” Inspector Hutchins said.

“I would like to thank the member of the public who reported the manner of driving of this vehicle. We need to keep working together as a community to keep our roads safe and make sure road users get to their destinations safely.

“This is a great example of the collaborative relationship between police and the community.

“We will keep pushing the safe driving message out to the local community to ensure every motorist thinks about their actions before they get behind the wheel,” he said.

This weekend, police in the area are conducting Operation Slowdown by targeting speeding, drink and drug driving, driving while fatigued, mobile phone use, helmet and other traffic offences.

“We will be out in force on the roads to ensure the safety of the community,” Inspector Hutchins said.

Police are encouraging members of the community to report risky driving behaviour, especially incidents of drink or drug driving by phoning their local police station.