Did you see the Parkes Way rollover? 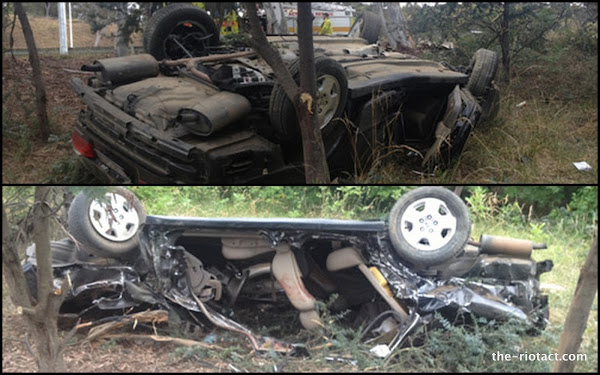 Around 5.15am, police attended a collision on Parkes Way after a car rolled-over near the off-ramp to Clunies Ross Street, Acton.

When they arrived at the scene police found a black Honda Accord down an embankment with one man trapped inside the car.

The male driver was extracted from the vehicle from the car by ACT Fire and Rescue members.

Acting Superintendent Rod Anderson from Traffic Operations said that in this collision, the seatbelt in the car saved the occupant from a potentially fatal outcome.

“In this case, it was only millimeters which stopped this collision being a lot more serious. The driver was restrained by his seatbelt when we arrived at the collision and we believe this quite possibly saved his life,” Acting Superintendent Anderson said.

ACT Ambulance Service conveyed the driver and his passenger to The Canberra Hospital where they will be treated for their injuries.

Police are urging anyone who witnessed the incident or who may have seen the car prior to the collision to contact Crime Stoppers on 1800 333 000, or via www.act.crimestoppers.com.au. Information can be provided anonymously.

9 Responses to Did you see the Parkes Way rollover?
Filter
Showing only Website comments

If there had been a guard rail there would this accident have been as bad?

I’ve seen many accidents on this road.. most of the cars flip due to going around a bend and doing it badly.

Makes you wonder why they dont put more effort into making straighter roads.. The roads are going to be there for decades might as well do them properly the first time.

Parkes way should really be 40 with the way some people drive. All it would take is someone to smash a lightpole and case a mass pile up.

My other grip is with all these major roadworks is it really effective to make the whole road a construction job at the same time? What about smaller chucks just to have less impact on the traffic. If they did one half and then the other it would be much better, without the need for kilometres of work with 1 or 2 people digging in a tiny area.

Also with glenlock interchange, what is with the work there, why are they mounding up that hill in the middle of roads to the west?

You think that because someone had an accident they must have been driving too fast?

That car did not stack at 60 k’s an hour. Look at the damage ffs.

Driver was speeding and DUI, according to police. No sympathies here.

In that case yes, no sympathies.

Driver was speeding and DUI, according to police. No sympathies here.

You think that because someone had an accident they must have been driving too fast?

Bloke saw the roadworks and flipped

Julie Macklin - 17 hours ago
Mark Katalinic Likewise why not use the roads for car racing? No, silly suggestion, as is yours. View
Julie Macklin - 20 hours ago
Tim McMahon Well, mine hasn't had a check since they closed the government registration check in Dickson years ago. Yes the c... View
Sport 3

A woman has died after being pulled from the water at a beach on the state’s south coast yesterday. Just...
Property 13